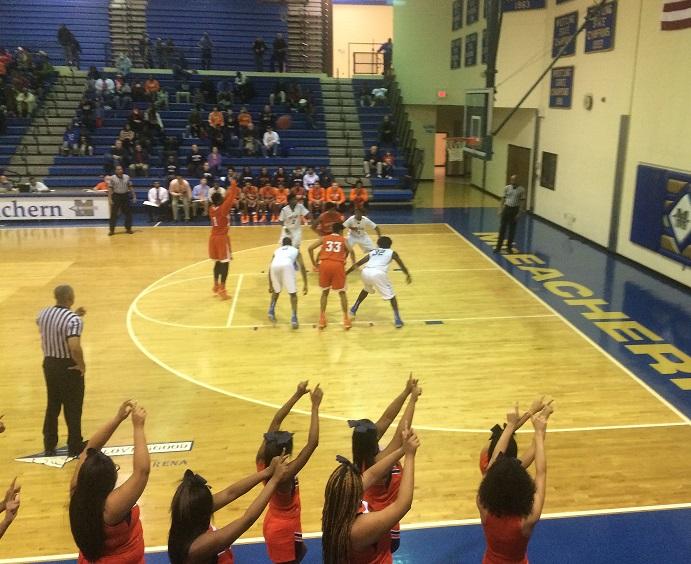 In dire need of a bounce-back game, NC Varsity boys basketball defeated rival McEachern on the road, 55-39. After the disappointing loss against Hillgrove, a colossal win such as this was exactly what the Warriors needed to turn their season toward the right path.

North Cobb trailed by six at half-time, but closed the game on a 33-13 run to take down the second-place Indians. Junior guard D.J. Render scored all of his 10 points in the second half to ignite the offensive fire. The players felt the pressure and performed when their backs were against the wall.

“We had to go into the locker room during halftime and come back together as a team. We knew deep down we could beat them, it just took execution, focus, and hard work.,” junior forward Kenny Ume said.

Ume dominated the game offensively, scoring from all areas of the court to total 20 points, a game high.

The fourth-place Warriors will get an opportunity to rise in the standings as they play at Harrison on Friday, and are home against Kennesaw Mountain and Marietta to end the regular season next week.

NC men’s basketball team dominated North Paulding on Tuesday night, 65-37. The Warriors overwhelmed the Wolfpack with pressuring defense and beautiful ball movement to take a whopping 37-10 lead into halftime. Forward Kenny Ume hit his first three shots to hand the Warriors the early advantage, which they never looked back from.

“That was the best basketball game we’ve played all year,” Lake said, “everyone was on fire.”

Junior point guard Ricky Shearman wowed the crowd with a behind the head pass to Council to pick up the assist. These are the type of plays the Warrior Nation expects to see from one of the savviest passers in the county.

Friday’s game yielded a different result as NC fell to first-place Hillgrove, 61-37. The Hawks outscored the Warriors 39-18 in the second half to remain at the top of Region 4AAAAAA.

Strong defense kept the Warriors in the game through the first half, but Hillgrove’s high-flying offense proved to be too hot for NC to handle in the game’s second facet.

“That was a tough one, but we have to bounce back and get ready for McEachern on Tuesday,” Shearman said.

North Cobb currently sits in fourth place behind McEachern, Hillgrove, and Kennesaw Mountain. The Warriors control their own destiny as they play both the Indians and Mustangs over their final stretch of games.