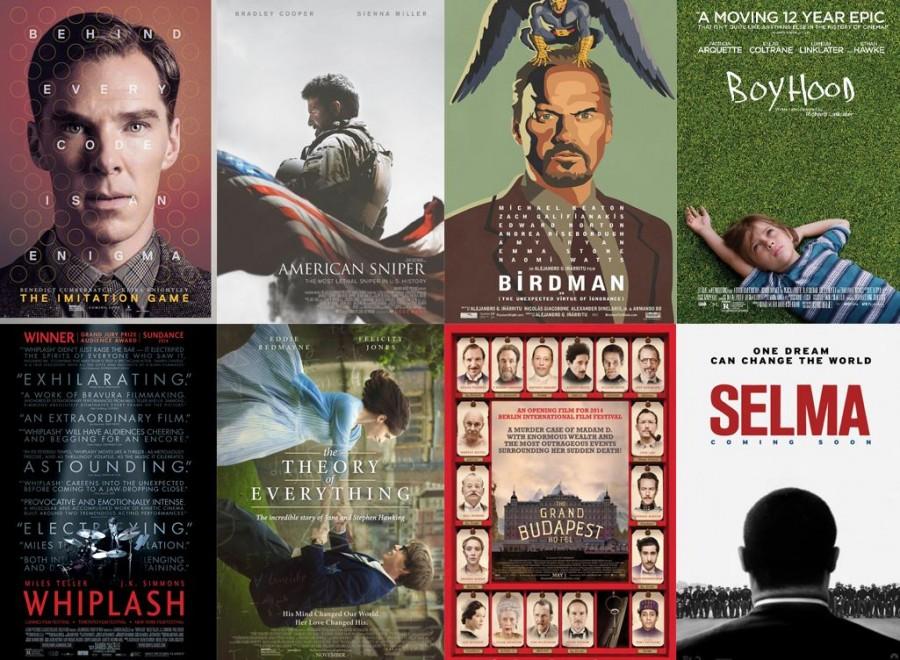 The movies nominated for Best Pictures at the Oscars, from left to right: The Imitation Game, American Sniper, Birdman, Boyhood, Whiplash, The Theory of Everything, The Grand Budapest Hotel, and Selma.

Film’s most crucial event airs Sunday, the 87th annual Academy Awards, hosted by Neil Patrick Harris. Despite controversy surrounding the film’s nominees and snubs, film lovers everywhere still feel the need to watch all the nominated pictures. Which will win the most coveted man in Hollywood, the elusive Oscar? Decide for yourself after reading the 411 on the Academy’s picks for this year’s Best Picture:

What’s great about it?

Boyhood proves a magnificent film in many ways, thanks to its extensive 12 year narrative. The film explores common themes such as change, adolescence, separation and even abuse, proving relatable for anyone.

What’s bad about it?

The film may run too long for some, at almost three hours. It lacks a definitive plot, covering more of a journey rather than a traditional conflict.

Who should see it?

Because I disagree with the R rating, I would say that the film appeals to those 13 and up. The diversity of themes in the film as well as the relatable nature make it a good choice for everyone.

What’s so great about it? American Sniper shows a staunchly accurate portrayal of PTSD, mixed with phenomenal acting and a great script. Tension builds in all the right places.

What’s bad about it? The film at times serves as hate propaganda against Islam if looked at in a certain light. The middle also runs pretty slowly.

Who should see it? People who have no issues with what I said above.

What’s so great about it? The acting, script, and musical performances all come together to make this film unique. I felt on edge throughout the film.

What’s bad about it? It proves an intense movie, and if not a fan, Whiplash probably will not suit you.

Who should see it? Lovers of intense characters and plots, jazz lovers; any film lover really.

What’s so great about it? The film, detailing a man spiralling into madness while directing and starring in a broadway show, a last attempt at reviving his career, proves stylistic while also including a killer plot.

What’s bad about it? The plot may confuse some; there remains a lot going on all at once.

Who should see it? I feel that this movie appeals to everyone, but it does mention drug abuse so anyone with sensitivity to the topic may not enjoy the film.

What’s so great about it? This film depicts many events of the Civil Rights Movement accurately while providing fantastic portrayals and a heart-wrenching plot.

What’s bad about it? Some could see this as a long, boring, “based on a true story” movie.

Who should see it? Everyone could learn something from Selma. The film really shows how far America has come and also how much further we have to go.

The Theory of Everything: As seen by Kayley Rapp

What’s so great about it? Eddie Redmayne and Felicity Jones brought so much raw emotion and heart to The Theory of Everything. Their portrayals of Stephen and Jane Hawking made me rethink everything I know about the two of them, and in a way, the movie humanized Stephen Hawking for me. This movie shows how debilitating a disease becomes to a person, but it also shows love can overcome any challenge.

Who should see it? Anyone interested in Hawking’s story would love to see this alternate take on his story. I however, believe most adults could benefit from seeing a movie that celebrates life in a sense. It makes viewers put their lives in perspective.

What’s so great about it? As with any Wes Anderson film, The Grand Budapest Hotel’s main accolades comes from its beauty- the colors, the scenery, everything.

What’s bad about it? The mediocre plot is overshadowed by the aesthetic aspects of the film.

Who should see it? Wes Anderson fans  and Harry Potter fans enjoying the sight of Ralph Fiennes with a nose.

What’s so great about it?

The Imitation Game really depicts what Alan Turing went through to solve Enigma and gives us an insight on what happen on the inside.

What’s bad about it?

The movie has some slow parts where it is hard to pay attention, viewers that get distracted easily might not enjoy this.

Who should see it?