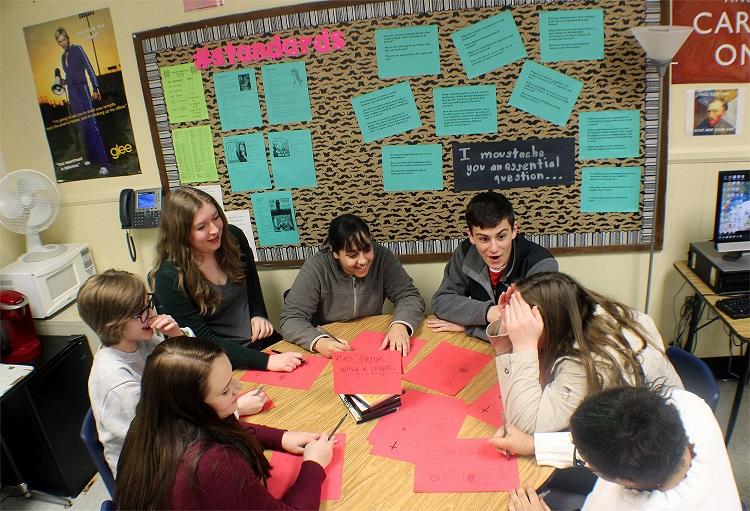 Staffers wildly disagree over this year's best and worst films.

With the 87th Annual Academy Awards quickly approaching, The Chant movie buffs decided to create their own Oscar predictions and choose who deserves the coveted awards.

Best Picture: American Sniper, Birdman or (The Unexpected Virtue of Ignorance), Boyhood, The Grand Budapest Hotel, The Imitation Game, Selma, The Theory of Everything, Whiplash

Fatima: Boyhood, definitely. It is a new take on the way movies are filmed. Not many movies today focus just on human life, ordinary human life, and this one did it very well. Selma and Whiplash made it a close call, but I think Boyhood deserves the win.

Anabel: Even though I have yet seen all of them yet, I am torn between Boyhood and Whiplash. Both of them serve as really moving films that focus on common themes such as rivalry, lack of control, and change.

Sophia Mackey: Whiplash gave me the best headache I have ever had. This movie was so incredibly intense and aesthetically pleasing. Although I have only seen three of the eight nominated films, I still feel Whiplash definitely deserves best picture.

Actor: Steve Carell in Foxcatcher, Bradley Cooper in American Sniper, Benedict Cumberbatch in The Imitation Game, Michael Keaton in Birdman or (The Unexpected Virtue of Ignorance), Eddie Redmayne in The Theory of Everything

Kayley: Eddie Redmayne because he literally had to pretend to slowly lose his ability to move and play an extremely well-known person.

Fatima: Steve Carell because it is such a different role for him and he excelled; usually he plays the funny man or at least throws in a couple gags that leaves the audience laughing, but he went above and beyond in Foxcatcher. I really almost could not recognize him.

Anabel: Again, I haven’t seen all of them, but Michael Keaton performed fantastically in Birdman. The way he never broke character throughout the prolonged takes and showed the delusion of his character, slowly driven crazy by his own aspirations, proved impeccable.

Supporting Actor: Robert Duvall in The Judge, Ethan Hawke in Boyhood, Edward Norton in Birdman or (The Unexpected Virtue of Ignorance), Mark Ruffalo in Foxcatcher, J.K. Simmons in Whiplash

Sophia Mackey: Edward Norton’s character in Birdman felt both realistic and unbelievably intense. He killed this performance and should get some praise, for sure.

Melissa: Robert Duvall is a great actor and has an amazing past in films. In this film he really plays a supporting role well even though the spotlight is normally on him.

Emmett: J.K. Simmons might have played the harshest character I have ever seen in a movie, but definitely deserves an Oscar for his amazing performance; I would put him up for best actor if I had a choice.

Actress: Marion Cotillard in Two Days, One Night, Felicity Jones in The Theory of Everything, Julianne Moore in Still Alice, Rosamund Pike in Gone Girl, Reese Witherspoon in Wild

Fatima: Rosamund Pike: goosebumps. She underwent a transformation, showed that she understood her character inside and out, and made me believe in her and in Amy Dunne. She deserves to be recognized for this role. End of story.

Carli: Reese, by far. This is such a different role than she usually does so I am so impressed by her performance.

Sophia Mackey: Honestly, I haven’t seen all of the movies starring these women. However, when I saw Gone Girl, Rosamund Pike’s performance practically made the movie as brilliant as it was.

Supporting Actress: Patricia Arquette in Boyhood, Laura Dern in Wild, Keira Knightley in The Imitation Game, Emma Stone in Birdman or (The Unexpected Virtue of Ignorance), Meryl Streep in Into the Woods

Kayley: Meryl Streep because she rocked as the witch. Have you heard her sing “Last Midnight?” Her voice remained powerful throughout the entire movie, and she made me sympathize for the wicked witch for once.

Anabel: Patricia Arquette’s performance really made Boyhood stand out as not just a movie about Mason (the boy’s) journey, but also the supporting characters. Arquette’s character struggles to find herself, suffering through three bad marriages while raising two kids. I feel like her character was relatable without being stereotypical.

Sophia Mackey: Seeing Emma Stone as an emotionally-unstable recovering drug addict as opposed to a quirky comedian came as a shock, the good kind. Her ability to play such different roles seems Oscar-worthy.

Animated Feature: Big Hero 6, The Boxtrolls, How to Train Your Dragon 2, Song of the Sea, The Tale of the Princess Kaguya

Carli: How to Train Your Dragon 2! I am so glad that this sequel worked out because half the time sequels suck but this is great and everything is so cute.

Melissa: How to Train Your Dragon 2 was fantastic! I loved the first one and was worried that the second one would not compare, but it was great!

Kayley: The Theory of Everything. It’s difficult to adapt a highly complex life into a 2 hour movie, and it seemed like they did a good job.

Fatima: Didn’t even realize that most of these were books…does that make me a bad English student? Anyway, I did read The Theory of Everything and the movie was great. Not as much focus of Hawking as a scientists and some inconsistencies here and there, but it’s an adaptation and that’s to be expected. Overall it was a heartwarming and fantastic take on a revered figure, and I think it deserves this. Good on them. (Thumbs up emoji)

Anabel: Although I haven’t read Whiplash, I’m gonna give it to this one as it really took an aspect not in the book, the musical performances, and integrated them as one of the best parts of this film.

Anabel: I’m tied between Linklater and Iñárritu. Boyhood’s 12 year commitment really stands out and shows Linklater’s passion for filmmaking, but Iñárritu filmed Birdman to look like one take! I can’t choose.

Carli: I would have to say Linklater: he put 12 years of work into that movie and it was amazing. That much dedication to anything deserves an award.

Sophia Mackey: I call a tie between Alejandro G. Iñárritu for Birdman and Richard Linklater for Boyhood. There’s no denying that Linklater’s perseverance in a beautiful 12-year-long project is worthy of an Oscar, but Iñárritu has an otherworldly directing style in terms of smooth transitions and cool shots.

Kayley: Hans Zimmer has created so many beautiful film scores over the past ten years, and Interstellar is now one of them. He’s brilliant.

Fatima: Oh yes, let’s talk music. I loved Hans Zimmer’s soundtrack; he is a genius and it was fantastic. Since everyone seems to agree and I think the other scores were also great and deserve equal recognition, I’m going to have to go with The Imitation Game. It made me feel the movie and what it was trying to express, and I think that’s what every soundtrack should do: not make me see what’s in front of me, but make me feel something beyond what my eyes register, if that makes any sense.

Anabel: Interstellar definitely. I’m shocked the movie was snubbed so much and not nominated for more. The score gave me goosebumps due to my fear of outerspace, a main component of the film.

Original Song: “Everything Is Awesome” from The Lego Movie, “Glory” from Selma, “Grateful” from Beyond the Lights, “I’m Not Gonna Miss You” from Glen Campbell…I’ll Be Me, “Lost Stars” from Begin Again

Kayley: “Glory” from Selma. This song really shows the emotions behind this movie.

Fatima: “Everything Is Awesome,” just because The Lego Movie deserves an award. “Glory” was inspiring, emotional, and pretty much everything one looks for in a song, but come on. The Lego Movie, please. It needs to win.

Emmett: “Everything is Awesome.” Why? Because it is awesome.