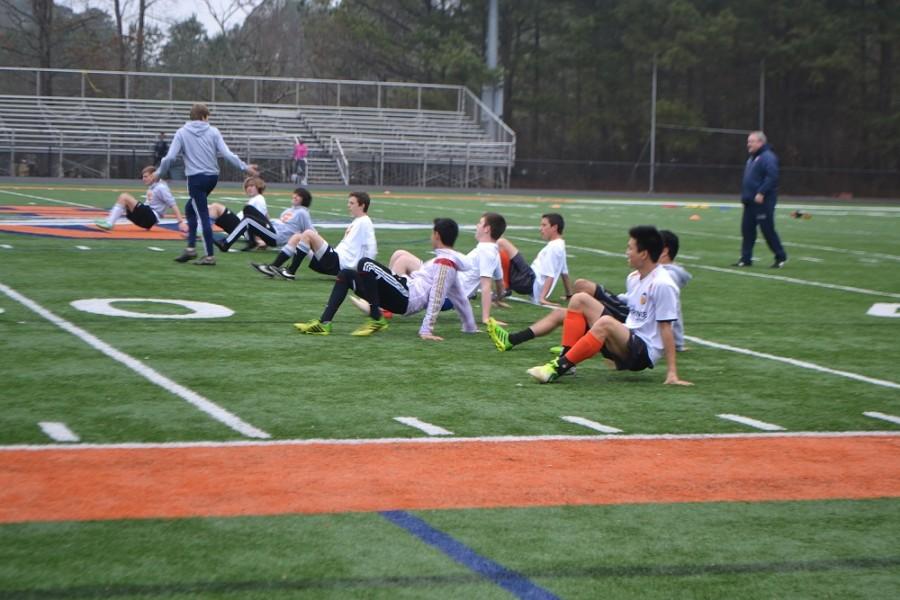 The boys soccer team went straight from the snow to the beach, doing crab walks and hoping for warm weather.

While NC students and staff enjoyed their snow days, athletes and coaches were frustratingly revoked from playing the sports they love.

The lacrosse, soccer, and baseball teams all postponed or cancelled games due to the inclement weather. In such cases, lacrosse’s cancellation made it so they did not even participate in the season opener and instead had to wait until last Friday, February 27.

“We had three games cancelled. I was angriest because one of the games we were supposed to play was Mt. Paran, which is a good matchup. A lot of my teammates were disappointed that we couldn’t play the first time, but we’ll make them up,” senior attack Chris DeGirolamo said.

The cancellations prove harmful to team chemistry as well. The lack of practice and games could make them unprepared for the season. Baseball players worry about their future performances because of the delays.

“The snow days over the last two weeks caused us to cancel three baseball games. We’re now way behind on our schedule and might cause us to not be ready for region play,” senior pitcher Sam Fulkerson said.

The weather also unveiled another issue: practice availability. Boys and girls lacrosse and soccer all fight for turf time, which creates more havoc.

While students waited an entire year to play for their prideful school, the disappointment resonated throughout as they wait even longer than anticipated. However, the girls lacrosse team tries to keep their spirits high.

“The girls are frustrated because they were really excited to play our first game, but it just made the game more special because they waited three games to play it,” girls lacrosse coach Mrs. Ezzell said.