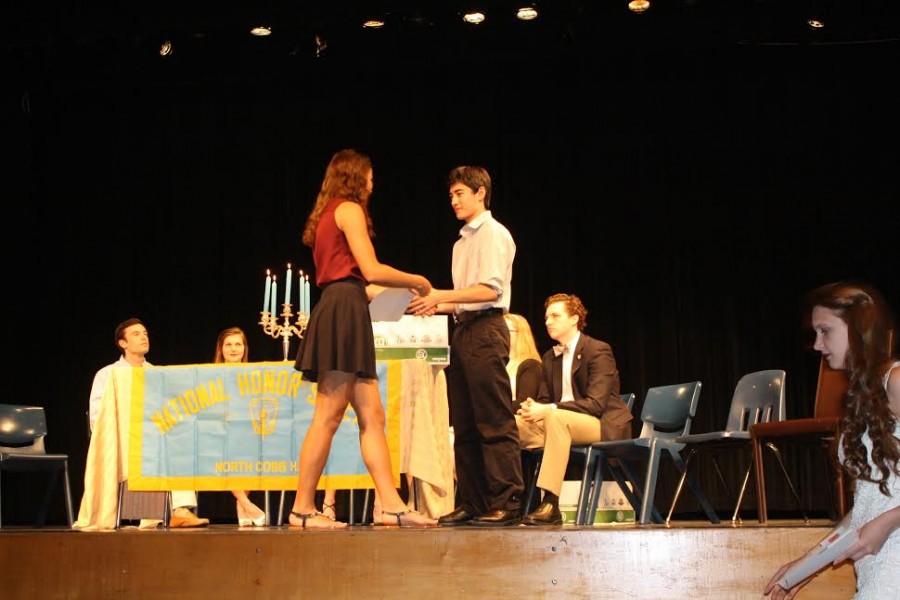 Beginning on March 4, juniors began their journey into the National Honors Society Club. Prospective members received invitations to an informational meeting that Friday, March 6 to discuss the responsibilities of the club and to obtain an application to submit by the coming Friday for a chance to enter the prestigious club.

“The best quality of NHS is that it’s a group of leaders for North Cobb who work tirelessly to do community service,” said Mrs. Tippens, NHS adviser. “It’s an amazing opportunity for our juniors to give back.”

“I was nervous that I wouldn’t get accepted because it’s a very competitive group of people and because of that I thought I wouldn’t get it,” said junior Rowan Yeni. “I was relieved when I was finally accepted.”

“I was so happy to be accepted into NHS because ever since I was in middle school I wanted to be in it and that I was accepted into a club like this is really honoring,” said junior Emory Perry.

The new members then attended another meeting where they received March of Dimes buckets and a challenge: they must beat the seniors in raising money, even though the seniors received their buckets a month prior and the juniors would only possess them for a week.

“I didn’t think we would would be able to make it because they had their buckets for a month we only had it for it a week,” said junior Riley Swab. “But we pulled through and some people got some serious money, and we won.”

The juniors rose to the challenge, beating the seniors by almost 1,000 dollars.  The top raisers were Will Stallings and Bobby Cole, who raised over a hundred dollars; other top raisers include Moriah Cheshire, Kelly Atkinson, Kiky Etika, Rowan Yeni, and Kirsten Hilton. Overall, NHS raised just under 3,000 dollars, combined with Science Club, for which Mrs. Tippens also advises.

“My grandfather helped me a lot with raising money, because he usually donates to charities and this time decided to donate to mine,” said junior Kelly Atkinson. “I’m really happy I helped us win.”

Typically, the club also required members to attend the March of Dimes walk, where the advisers would turn in the money raised and walk a mile around a track. Unfortunately, inclement weather canceled the walk.

“I wasn’t there, but I’d heard it was cancelled,” said Mrs. Padron, who added that “the students wore their March of Dimes shirts that Monday instead, to show support.”

Although these new members attended these meetings and participated in club activities, they were not yet members; at least, not until April 27, when inductions began. Attended by parents and students alike, the night began with an introduction of NHS qualities by the senior officers, namely the pillars of the club: scholarship, leadership, service, and character.

“We were really nervous being up there, but all of the juniors looked pretty happy when they were inducted,” said community service chair senior Alex Mancuso. “It was a really great night.”

After the speeches, the newly inducted members of National Honors Society walked to the stage when called, receiving a certificate of membership, a car sticker, and a pin. They signed their name in a book, exited the stage, and settled back to cheer on their classmates.

“I really enjoyed the induction ceremony,” said junior Dominique Harry. “The atmosphere and the feeling was really great, and it felt good to be an official member of the club.”

Once the new members were inducted, Mrs. Tippens and Mrs. Padron set on honoring the NHS veterans. Each senior called to the stage received a stole which students wear around their necks, with the officers receiving the additional gift of a coin with their officer position engraved. Once the induction and honors completed, the guests were released to dine on the food provided.

“The induction ceremony was really fun, and the food was really good,” said junior Ben Jones. “It was a good environment to be in.”

The first order of business for the new official members remained officer elections. Interested students filled out an application form for one of five positions: president, vice president, secretary, historian, and community service chair. Once the applications were in, members from each category presented a thirty second to one minute speech as to why they believed they were best for their respective position.

The audience circled the candidate they wished to see in the position and turned it into Mrs. Tippens. The results came out Monday, with Gina Lee as president, Ella Hasty and Joseph Fonseca as vice presidents, Fatima Elfakahany as secretary, Austin Birchell as historian, and Christina Sorenson and Nolan Hubbard as community service chairs.

“I was honored to be chosen and to have the respect of my peers,” said junior Christina Sorenson, who was elected community service chair. “I am excited to make a positive difference in our school and community.”

Next up for NHS remains meeting with the newly elected officers to set the calendar and brainstorm for the coming year.