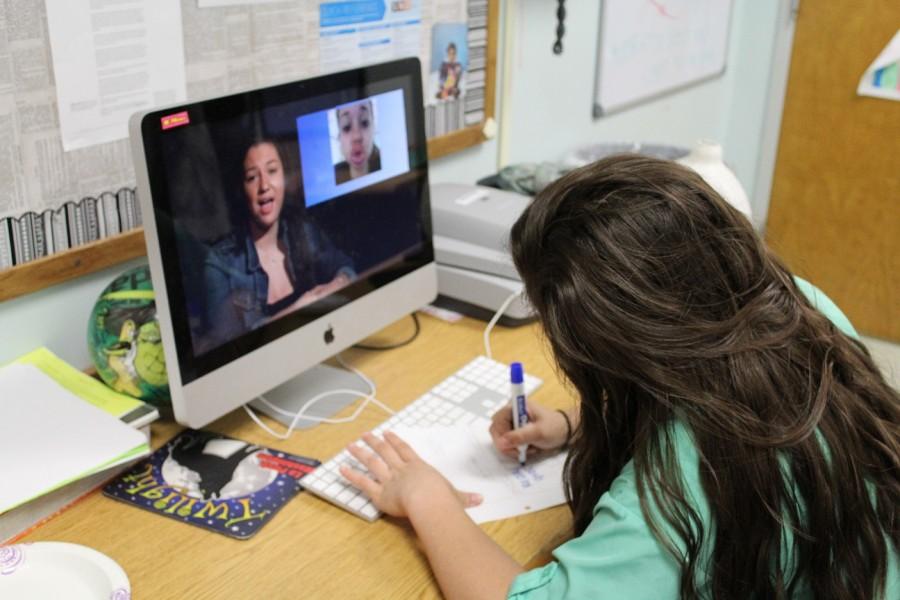 Medina running back through tape to examine improvements and timing.

Every once in a while, a high school equips a student who can then strut through the halls with clear purpose and determination. Junior Lexi Medina owns that title with her love for broadcasting and expertise at anchoring the school’s news show Tomahawk Today and SkillsUSA.

Medina strives to perfect her craft and appreciates the art of broadcasting. That perseverance attributes to her laundry-list of accolades, including making Cobb County history for becoming the first student in the county to run and be awarded a state officer position at SkillsUSA.

State officers execute a vastly different task than regular anchors or production members on broadcast teams. The title comes with new, challenging responsibilities that Medina seems up to perform.

“As a state officer, I’ll talk about [SkillsUSA] and give speeches regarding goals and to be motivational. But during the competition, my state officer position goes away and I become a competitor,” Medina said.

“We are in the broadcast news production contest. The four of us work together to create a three-minute broadcast with the information given,” Medina says.

The group’s ruthless effort earned them a state-wide win for their production, and they now look forward to competing at the national level later this year in Louisville, Kentucky. For the rest of the school year, these competitors are selling Krispy Kreme donuts every Thursday to raise money for their National’s trip.

Dimmett, Medina’s partner, thinks highly of his colleague and friend: “[Lexi] brings good energy to our team and her skills stacking a show really tie together the writing skill that the rest of the team has.”

Medina attributes her beloved broadcast teacher, Mr. Dempsey, for recruiting her into the video world. Without his support, she believes she might not have been so successful.

“From my freshman year, I joined the video/technology club after school because Mr. Dempsey approached me and asked for me to be in it. I really got into video production because of that and it really inspired me to pursue that,” Medina said.

Medina cites her love for the spotlight as a reason why she enjoys anchoring, along with researching news and informing the public.

“I like the anxiety of being in the news room. I do well in the pressure types of situations, so I like to be in them because I know I can thrive in them. It’s exciting to learn what’s happening and how to convey it in your own way for people who don’t know about it yet,” Medina said.

Medina’s broadcasting in high school allowed her to find her niche and uncover her true passions, something she hopes to pursue as a career. She plans to become an anchor, but stresses her focus on international affairs and desire to travel and learn about different cultures and their current events.

“I looked into internships with CNN, 11 Alive, and Fox 5 but it’s hard to land them because most of the jobs are reserved for college students. But when I go to college I will definitely intern whether it be behind the scenes or whatever I can do to learn the industry and make connections,” Medina said.

Although she must wait an extra year to enjoy the benefits of interning, her current accolades prove more worthy than some college students. Medina hopes to attend the University of Georgia’s prestigious Grady College of Journalism and Mass Communications next fall, but also remains open to the University of Alabama and Boston, respectively.

Medina’s teachers also see the special qualities that she encompasses. Besides her excellent speaking skills, she holds more to her persona. Medina’s Honors U.S. History teacher, Mrs. Tummins, highlights her favorite quality of Medina by saying, “she has a true joy for life and a great sense of humor.”

Dimmett joins Tummins and the rest of NC in rave of Medina’s personality, but also appreciates her work ethic: “She’s fun to have as a partner because we can always cut up and make jokes, but when it’s showtime we can buckle down and pump out a show without a problem.”

Lexi Medina showcases intelligence, humor, and talent en route to a trophy-case full of accolades, and only remains a junior in the process. Her hard work and determination will surely land her a gig at the news team of her choice in the future, and NC looks forward to seeing what one of their best and brightest students can bring to the public.

To see Medina and her co-host of the Hardly News segment, click here.