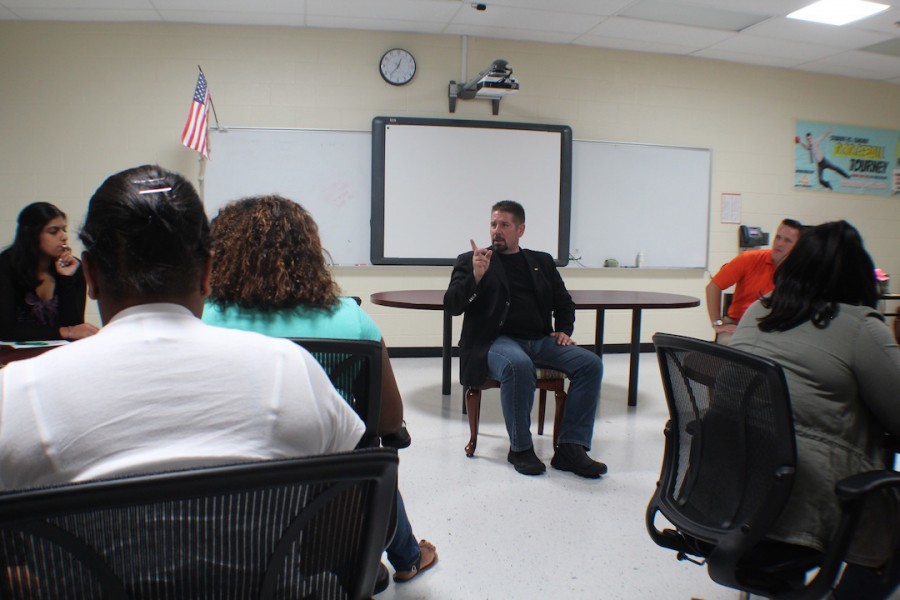 Everhart tells the students about the best parts of Taste of Kennesaw and how it brings the community together.

Taste of Kennesaw, held on September 12 this year, brings together large chains to mom-and-pop restaurants to provide a unique taste of the city.

Everhart, who helps to run the event, explains its rich history: “A few years ago, the city came to us and asked if we wanted to reinvent Taste of Kennesaw. It had been going on for a long time, and the city really wanted to step it up. We made a promise to them when we started, that it would be a strong community event. We said, ‘alright we’re gonna build this thing up but any money left over we’re gonna give back out to charities’.”

A number of musical acts accompany the food vendors during the event, including local dance troupes, performers, and the main event from The Mustangs, a party band.

North Cobb’s involvement with Taste of Kennesaw started at the event’s inception as the program donates money to NC’s Shop With A Warrior program. Kennesaw Mountain and Kell high schools, the Jerry Worthan Christman Fund, and the American Legion also receive money from the event.

“The reason for [North Cobb Students] involvement was sort of a strategic one,” Everhart reports. “When we decided on the charities we also wanted the schools to buy in on the high school level because one of the things that we ask is for them to help us market the event down to the feeder schools. If we bring more people, then I can sell more sponsorships and that translates into a better event and more money flowing down to the charity.”

Each school operates a drink tent at the Taste of Kennesaw as the soda vendors in the event, and schools can make upwards of $1600 dollars off of one day of sales. The schools keep their profits as a charitable donation.

Tribal Connections students immediately started planning ways they could incorporate school spirit into the event. Ideas exchanged include a cameo by the North Cobb drumline, games with the football players, and face painting. The school will also receive a “swag tent” where they can sell school spirit wear and make a profit.

Because the City of Kennesaw always looks to give back to the community, local high schools compete in the Food Challenge to collect canned and dried food for Shiloh United Methodist Church’s food pantry.

“We ran across Shiloh United Methodist Church on Cherokee and Jiles and nine years ago. They used to have about 50 families who would feed about 300 families out of their food pantry, so KBA has set up a food drive for them at the Taste of Kennesaw. Each school collects as much food as possible and the winner gets a nice trophy with a can of Bush Beans on top,” Everhard explained further.

Beyond that, and to expand the taste of the event, North Cobb’s Culinary program will compete in the event’s Iron Chef-style cookoff. Each school can submit a team and Carrabba’s, California Dreaming and Costco will provide food supplies. The winning school will receive $2000 and the team will receive $1000 to split amongst themselves.

With all of the hard work from Tribal Connections and the Kennesaw Business Association, the Taste of Kennesaw plans to reach new heights. Be there on September 12th and find North Cobb’s tents near Eaton Chiropractic to support the Warrior Nation.