We are orange: NC unifies under new slogan 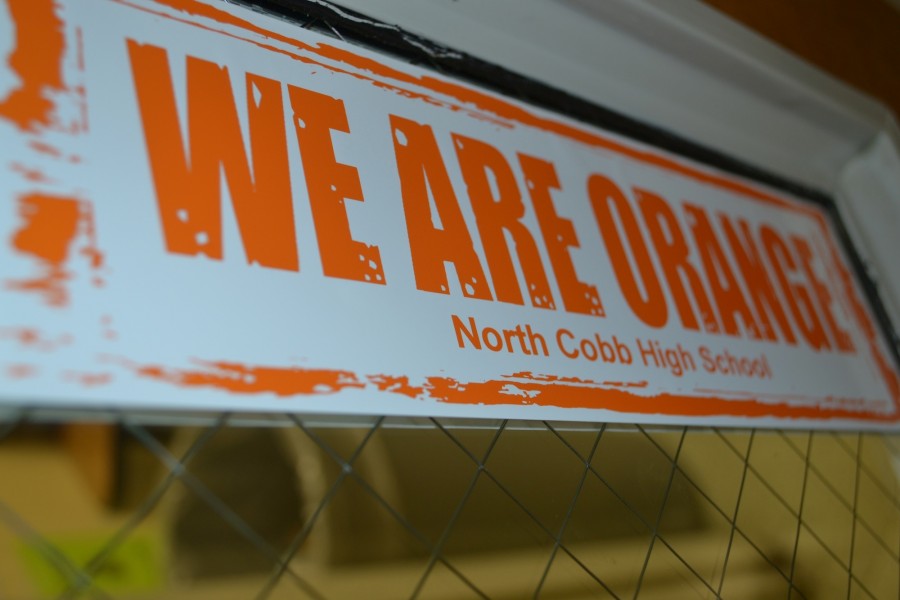 NC teachers displays their pride for the new slogan by putting stickers on their doors and posters outside of their classrooms.

Attempting to evoke school pride and unite NC students with their peers and community, a leadership team, composed of Tribal Connections executives and athletes, recently instated a new school motto, “We Are Orange.”

“Orange is a prominent color that is recognizable by not only students and staff, but also by alumni and and members of our community. We want ‘We Are Orange’ to encompass ideas of respect and communication and promote an overall positive school environment,” Assistant Principal Steve Revard said.

The student leadership team stands as the brains behind the new motto. The group meets monthly throughout the school year and during the summer, working towards improving NC. One of the team’s goals came in response to a survey issued by Cobb County, assessing students’ overall satisfaction with NC and its faculty. Although the school received superior ratings in most categories, respect and communication scored lower. “We Are Orange” attempts to address this weak point and provide improvements.

“The motto is a way to promote student, teacher, and parent communication and symbolize school pride. We hope this will compel students to take care of their school and surroundings, as well as extend the reach of NC’s influence,” Revard said.

“We Are Orange” also stands as a central theme that attempts to emphasize the color orange in sports, school events, and around the campus. Orange serves as a unique color, setting NC apart from other high schools in the region. Likewise, the motto embodies several crucial values under one simple phrase.

“In addition to creating new initiatives, we want ‘We Are Orange’ to highlight the things we already do that make NC great,” Revard said.

Administrators understand the confusion among some students who entered the school building to find “We Are Orange” stickers posted throughout the school and some of their teachers wearing shirts sporting the new theme.

To educate students, Principal Bucky Horton plans to communicate the motto’s meaning in a presentation, airing August 17 on Tomahawk Today. Additionally, staff members hope that students will pass the message on to others through their conversations and actions. Remember, “We Are Orange.”