Warrior perspectives: What do seniors think of the new changes? 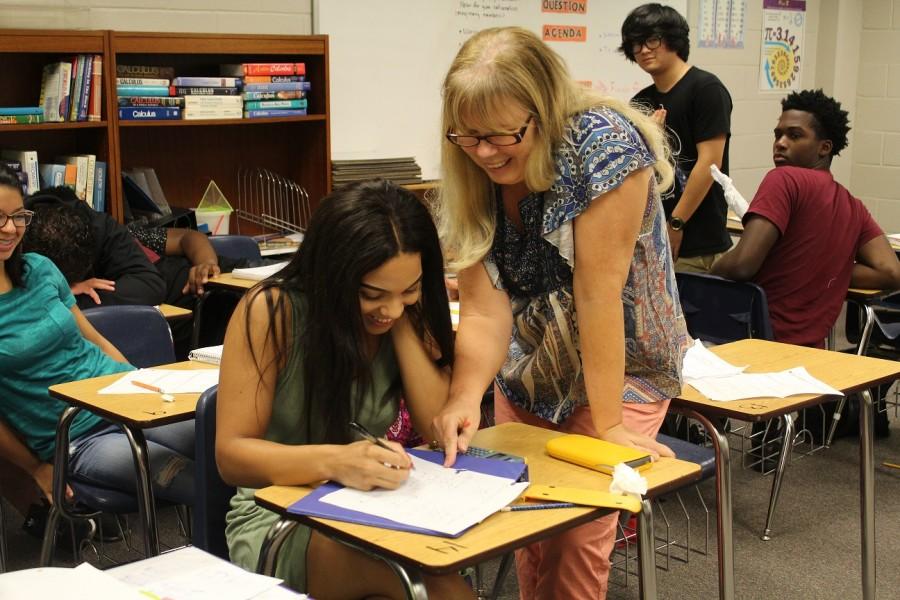 One of our new teachers, Ms. Nadeau, helps junior Korah McFarley with her math classwork.

The 2015-2016 school year became a time of changes for NC. As seniors finally settle into their last year, students reflect on the visible changes thus far.

Such notable changes include a new principal, a new slogan, new teachers, and a new parking system. Many beloved teachers retired, the bells remain inconsistent, and the school begins to phase out the color blue. Still, the vast number of retiring teachers appears to sadden students the most.

“It’s a really complex thing, you know, especially teachers retiring,” commented senior David Doctor. “Finding out about Mr. Williams, who will leave next year, was especially hard for me, but it’s also exciting because as we’re graduating, change is coming and  that will hopefully make our school better and better. It’s a generational thing, where people leave and come in. Change is good. It’s also sad, but it’s mostly good.”

Senior Justin Nguyen agrees, but takes a more pragmatic view: “I mean, after a couple years at the school, teachers and students usually notice some things wrong. After those couple years, though, we all grow accustomed to it, but the thing with a new principal and new teachers is that they’re going to want to be doing some changes, and we’re just going to have to deal with it. After all, this is our senior year. We’re only here for one more year, so I don’t really mind the changes at all.”

Still, seniors may need more time to become accustomed to certain changes, such as the new school slogan, “We Are Orange.”

“I feel like ‘We Are Orange’ is not as unifying as ‘Make it Happen,’ so I’m not entirely fond of the logo. I feel like if it had to be a motto, it should’ve been secondary to our original,” senior RJ Anderson reflected.

Another point of contention among seniors lies in the new parking system. In previous years, the school assigned each student a parking space. Now, a student merely receives a pass and can park in whichever space happens to remain empty. A result of the system proves the loss of the senior parking lot, which traditionally occupied an area closer to the school.

“I find it really upsetting that we no longer have a senior parking lot, because it’s something you look forward to the three years coming into your senior year. Other schools have privileges for being a senior, like ice cream socials where they bring ice cream on Friday. I just feel like we don’t have as many special privileges as other schools, and we work way harder,” said senior Ella Hasty.

Other seniors, such as Sophie Rouad, second the feelings: “I wish we had assigned parking spots, because last year the majority of the seniors were in the front lot, which was quote unquote ‘not supposedly the senior lot,’ but it was pretty much the senior lot; there were only a couple of juniors who were in it last year. So I feel like we should have assigned parking, especially since we’ve waited this long for it,” she said.

Still, for other seniors in the daily routine of school, the changes remain almost negligible.