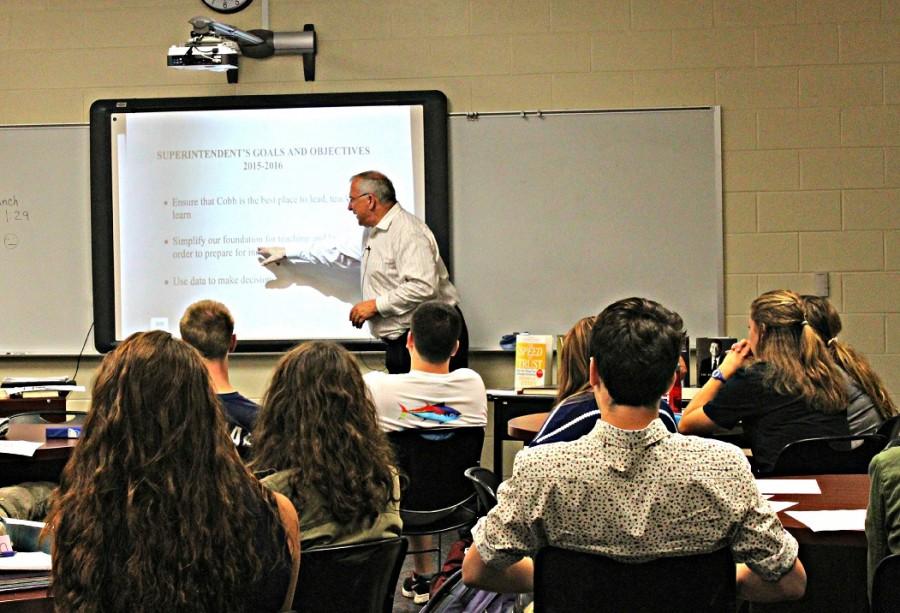 Scamihorn shows the class the “Superintendent Goals and Objectives” for the 2015-2016 school year, part of his lecture about the school board and their responsibilities. “I really enjoyed his speech. He was very interesting and it was very easy to follow and gave a lot of information that I didn’t know about how the school board ran,” said senior Jordan Chandler. “I liked how he talked about things we cared about, like the schedule and how school board meetings ran and how they voted on the new addition to the school. It was really cool.”

Today, during first and third period, Cobb County School District Board Chair Randy Scamihorn came in at the behest of AP Comparative Government teacher Ms. Biddy’s request. He spoke to the Magnet bundle seniors about the county, leadership, and government.

“It was great and really informative. I liked learning more about my county and how the education system works, so I thought it was pretty cool when he was talking about various things the board does,” said senior Nashon Tafari. “For example, I liked how he was talking about how we’re getting a new theater[in] 2017, even though I’m not going to be here. It just shows how some people can make a difference from all levels of government.”

Typically, Mr. Scamihorn visits twice a year, in the fall and spring, if possible. He brings a wide variety of material to further hone his subject. For his leadership subject, he uses various autobiographical books as examples; for county discussions, he presents an example binder to demonstrate the work that goes into every decision made. Mr. Scamihorn proves aware at the temperment of the class, but enjoys coming to speak anyway.

“I want young adults in high school to be ahead of where I was high school.  Nobody ever came and talked to us about running for office or how the school system works, or leadership or anything like that,” he explained. “So if I can do my little part in helping people at least think, that’s what matters to me. And I’m sure some are bored, of course, and some are hungry, and some are sleepy and all that, but that’s human nature, so you try to overcome that.”

Many students appreciated the speaker, however, and enjoyed the discussion of the inner workings of the county system and local government. Topics ranged from the new grant given to NC for a new theater to the reasoning behind school schedules. He also explained the planning and processing for each decision made by the board, as well as the importance of government transparency.

“It was really interesting. Mr. Scamihorn told us a lot of things about board meetings I didn’t realize and it was really nice of him to come and tell us about the school board and leadership,” said senior Kiera Elston. “At first I didn’t know what was going on, but when I did I was glad he came because before he explained it I was one of those people who didn’t really understand why certain things were happening but now that he explained them I understand and now I can explain them to other people as to why certain things happen.”

Senior David Escobar agreed, and added, “Mr. Scamihorn is an excellent speaker and an excellent representative for Cobb County. I think that his job as a representative is taken very seriously by him and by the other board members, which is why I feel so appreciative having him come in and speak to us. He was a great voice for how our system of government works locally, so I enjoyed having him speak to us.”

Throughout the day, Mr. Scamihorn covered a wide variety of topics, and he hopes students gained some new knowledge. Above all, however, Mr Scamihorn wishes for the seniors to take at least one piece of advice from the event:

“Don’t stop learning,” he advised. “Leadership is a skill to be learned, just like one learns to be a good neurosurgeon, a good English teacher, or a good  truck driver. You have to know different aspects of human behavior. You also have to know what time and place some things need to occur, and a lot of people don’t realize that. So it’s important to always be learning.”