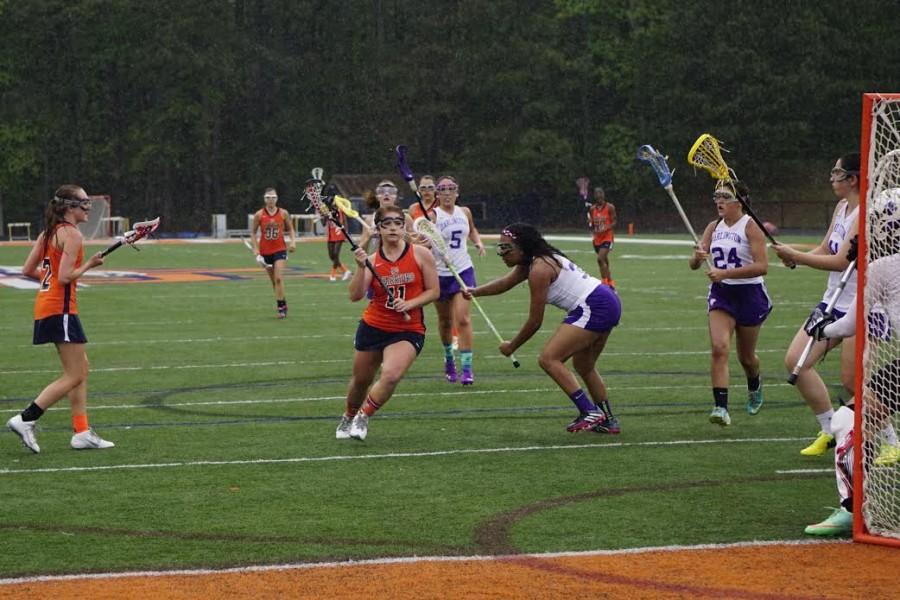 Jazeri Comstock played lacrosse for NC, playing under the number 11. The lacrosse team placed that same number on the shirts they sold to raise money for Comstock’s medical bills.

Over the summer, a tragedy struck the Warrior Nation. After a routine dentist appointment, doctors diagnosed former NC student Jazeri Comstock, who graduated in May of this year, with leukemia nearly four weeks ago.

“I was really upset when I found out and it was bad timing, too, especially with Peyton Reid’s mother dying,” sophomore Ansley McCoy said. “It feels like our team was struck with cancer. But Jaz is a strong player and she’s always worked so hard so I know she’ll be able to beat it.”

After Comstock visited the dentists’ to have her wisdom teeth pulled, an infection raged through her body, one that could not be fought. The doctors ran tests, and found the leukemia.

“I was really shocked when I found out,” senior Sara Moeller said, Comstock’s teammate. “I was already pretty nervous for her because she had some trouble after getting her wisdom teeth out, which is when they found out. It was really scary.”

The entire team reacted in a devastating way, but none more so than Cathy Ezzell, her lacrosse coach. Despite the prognosis, however, Comstock’s team and coach remain positive.

“It was shocking, it was devastating,” her lacrosse coach, Ms. Ezzell said. “She’s in the hospital now, but out of all kinds of leukemia, acute lymphatic is the ‘best’ kind to have, if there’s such a thing, because it’s the most curable. So there’s still a lot of hope.”

Once her NC lacrosse team received the news, they immediately launched into action. For the first couple weeks of school, they designed and began selling  T-shirts proclaiming “No Warrior Fights Alone,” with Comstock’s name and lacrosse number on the back. The team’s efforts allowed them to sell approximately 90 shirts, with Comstock receiving a five to six dollar profit for each shirt sold. Buyers received the shirts Friday, August 28, and wore them throughout the week.

“We had a lot of the teachers go ahead and donate extra money on top of the cost of shirt,” revealed Ezzell. “There are different GoFundMe accounts that different people have started, but GoFundMe takes a portion of the proceedings for every donation, so a lot of teachers just want to donate it strictly in cash directly to her.”

The shirts, however, prove only one avenue Ezzell plans to take to raise money.

“We’re also looking to do a yard sale, but it’s been difficult to find a time to do it at school, so we’re talking to Barbeque Street, which is where Jaz used to work, to see if we can do it in their parking lot,” she said. “We’re also thinking of doing a Barbeque Street night, where all the proceeds from dinner that night go to her.”

Yet, Ezzell does not stand alone in the battle to raise money and awareness for Comstock’s plight. Besides family-friends setting up fundraisers, various lacrosse players also attempt to honor Comstock.

“We have a project in chorus where we have to make a video using a song to show what chorus is all about, but we took it in a different direction and we’re going to try to do it to the ‘Shake it Off’ video for Jazeri, and we’re going to try to get a lot of the school involved to let people know about her and to raise her spirits,”senior Jordan Chandler, another teammate, said.

As numerous efforts begin, Ezzell remains determined, as the situation remains personal for her.

“She was one of the girls that was on my team when I first started coaching,” she said. “They were the ‘Fab Five,’ and they started their freshmen year, my first year. It’s been really tough since graduation with them, because one of the Fab Five’s mother died of cancer in July, and like two days after we found out that Jaz had leukemia, so it’s been a really rough time.”

Ezzell remains strong and continues to produce the best for the Comstock family.

“Jazz and I text, if not daily, then every other or every three days,” she said. “If she’s in too much pain, I’ll text her mother and check up on her, and I’ve set up email distribution list to all the teachers to let them know how she’s doing,” she said. “She’s strong, though. I believe in her. I know she’ll beat it.”