Andrew: The 1-2 Kansas City Chiefs travel to the Queen City to take on the unbeaten Bengals on Sunday. The Chiefs are desperate, as they attempt to avoid their first 1-3 start since 2012, the year they posted the league’s worst record.

Jamaal Charles will test a Cincinnati run defense that is yet to allow a 100-yard rusher, expect Andy Reid to try and get him involved early, and continue feeding him throughout the game. The Chiefs offensive line allowed a league-high 14 sacks through the first three games, so look for the Bengals pass-rushers to pressure Alex Smith into some mistakes.

The Chiefs’ 28th ranked pass defense sets up Andy Dalton for a field day, as he will utilize his weapons.

Overall, Kansas City’s desperation will hurt them as Smith will throw interceptions, allowing the Bengals to breeze to a 27-17 victory.

Philip: The semi-hometown pride known as the Atlanta Falcons (3-0) face the Houston Texans (1-2) at home on October 1st, 2015. New head coach for the Falcons, Dan Quinn, has brought a new attitude to the team, especially on Defense. Atlanta has a very strong dynamic duo with Matt Ryan and Julio Jones. As expected, the Quarterbacks will primarily determine the game and I believe the Falcons will exploit the Texans poor secondary with Roddy White and Jones while Ryan Mallett will try to manage the game for Houston. The Texans struggled against Quarterbacks Cam Newton of the Carolina Panthers and Alex Smith of the Kansas City Chiefs, so expect a struggle against Matt Ryan. The Texans will keep the game close, but the Falcons will pull away late in the game and maintain a 4-0 record while Texans fall 1-3. Final score, Falcons 28-17.

Adam: A key divisional matchup takes place as the undefeated Arizona Cardinals (3-0) battle rival St. Louis Rams (1-2). The Cardinals boast the league’s statistically best offense, averaging 6.6 yards-per-game with a (finally) healthy Carson Palmer at the helm. Larry Fitzgerald benefits from playing with an actual NFL-worthy quarterback and shows signs of his old self when Kurt Warner played under center with him. A stout defense allowing the third-least points per game will continue to dominate against a team relying on two rookie running backs. The Rams, scoring the fourth-least points in the NFL, face a daunting task against a dominant defense. Sam Bradford already struggled to this point, and now he faces off against a secondary with two pick-sixes last week. The matchup will prove too tough for the Rams, and will end in a fourth-consecutive victory to start the season for Arizona. Final score: Cardinals win 27-10.

Michael: The Detroit Lions travel to ever difficult CenturyLink Field to play the Seattle Seahawks Monday night, 8:30 ET.  The Lions have fallen off since last season, most noticeably on defense, a unit that was one of the league’s best, without the talent of Ndmakung Suh, one of the NFL’s best defensive lineman.  In 2015, the Lions defense has been unable to stop either the run or the pass.  The offense leads the NFC with 8 total turnovers, led by Matthew Stafford’s 5 picks.  The Seahawks defense recovered from a poor showing in weeks one and two as Kam Chancellor returned and the offense targeted marquee tight end Jimmy Graham more in the passing game.  The Seahawk’s running game appears their biggest concern as injuries have plagued star running back Marshawn Lynch the previous two weeks.  They will look for success with undrafted rookie Thomas Rawls, who ran for over 100 yards last week.   My prediction: Seahawks: 28-13.

Emmett: Despite Ben Roethlisberger being out with an MCL injury, the Steelers will still be able to bring out the victory. With a struggling Ravens offense, the Steelers will use Le’Veon Bell very effectively and hopefully get Antonio Brown started up. The problem with Pittsburgh this week is Michael Vick starting, who is very turnover prone. They hope to get him to roll out of the pocket a lot, while even running the ball. Justin Forsett, running back for Baltimore, has yet to show up this season, but this game he will finally get it going against the very iffy Pittsburgh defense. With all the injuries and struggles going on with these two teams, the Steelers will come out on top on the Ravens, 17-14. 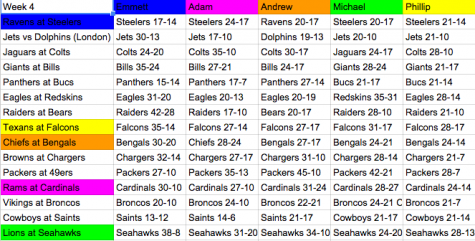