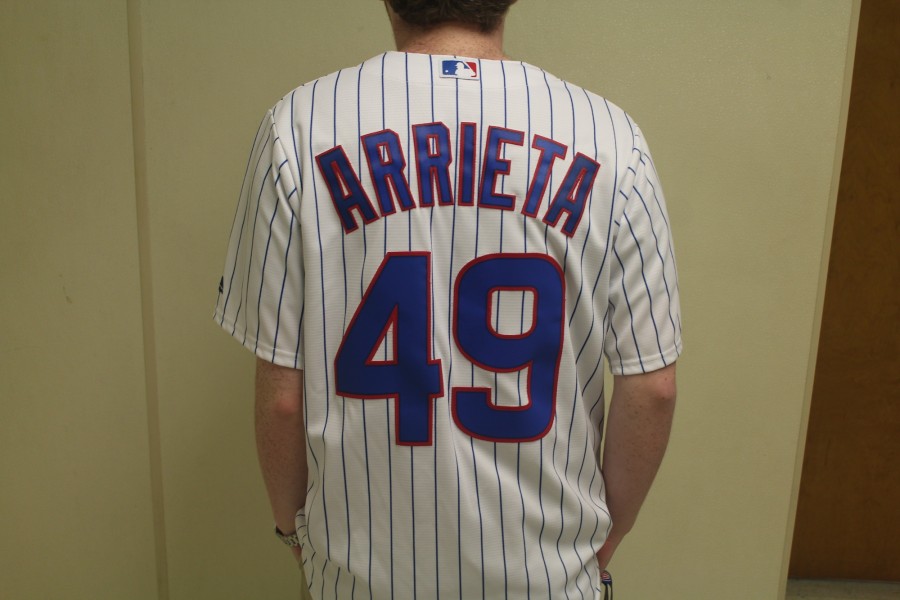 A Cubs fan shows their pride by sporting the jersey of their favorite player, number 49 Jake Arrieta, to school. The Cubs are predicted to triumph in NC’s Major League Baseball wild card preview.

As summer ends, the MLB enters what they believe as the most exciting time of the year. No, not Christmas, but better: The Fall Classic is around the corner. With two gripping Wild Card matchups, who has the edge and advances?

Two teams that began the season hot both struggled recently, with the Yankees skidding to the finish line at 3-7 in their last ten games. The Astros were the MLB’s darling in the first half, but they hit losing streaks of five games several times this season. With neither team playing necessarily exceptionally coming into the game, either team can take it.

Masahiro Tanaka pitches for the Yankees despite struggling lately. His 12-7 record and 3.51 ERA rank lowest among the four Wild Card pitchers. While possessing devastating pitches, his inconsistency and injuries plagued his season.

New York boasts a veteran offense consisting of a clean Alex Rodriguez in the midst of a comeback year, Carlos Beltran, Didi Gregorious, and Jacoby Ellsbury. Rookie Greg Bird provided a spark when an injury shut Mark Texiera down for the season, hitting a .871 OPS (on base plus slugging) and 11 home runs. Manager Joe Girardi deserves Manager Of the Year consideration with how he turned an aging group past their prime into a playoff team. Their bullpen can save a bad pitching performance, with Andrew Miller and Dellin Betances leading the way. Hopefully news breaking of CC Sabathia checking into rehab will not sway their focus from the game, but his teammates may not overcome the mental blow.

Houston should knock Tanaka around for long enough to score at least a couple runs off him, allowing more than enough for Keuchel to take over. Houston’s first playoff appearance since 2005 continues on into the next round.

Coming out of the most dominant division in MLB history, the Pirates (98-64) and Cubs (97-65), second and third in the MLB, respectively, battle it out for the chance to move on to the Division Series against rival St. Louis Cardinals. Both teams are neck-and-neck as only one game sets their records apart, and both put their ace pitchers on the mound.

The Cubs edged out the season series against Pittsburgh 11-9, but the Pirates stole the final series against Chicago, a crucial component to them hosting the Wild Card game. While Chicago makes their first playoff appearance since 2008, Pittsburgh prepares to host the Wild Card game for the third straight year. However, the past two years ended for the Pirates winning the first and losing the second one-game playoff, including a blowout loss last year to the eventual World Series champion San Francisco Giants, so their “experience” seems a bleak laurel to rest on.

For the Pirates, Gerrit Cole gets the nod, and rightly so. Their most consistent, dominant pitcher this season looks to shut down a young but explosive Cubs offense. In 32 starts, Cole boasts a 19-8 record and 2.60 ERA with a 1.09 WHIP (walks hits per innings pitched). Even more impressively,  he pitched better against the Cubs this season, with a 2.13 ERA and 2-1 record over four starts.

Jake Arrieta, the hottest pitcher in the world, takes the mound for Chicago as a Cy Young candidate who always takes the field with something to prove. Arrieta shattered the MLB record for ERA after the All-Star break, at 0.75. His ERA after August also made history, standing at a whopping 0.41. His 20 consecutive quality starts (at least six innings pitched and three or less earned runs) to end the season broke the MLB record, ensuring his team a chance to win every single game he pitches. He finished the season with 22 wins, a 1.77 ERA and 236 strikeouts, making him arguably the most unhittable pitcher in the MLB. After posting the highest ground ball rate induced against hitters, this proves a somewhat favorable matchup against the seventh-highest ground ball hitting team. If the Cubs win Wednesday, look out for Arrieta to pull a “MadBum” and carve up the entire MLB en route to winning the Postseason MVP.

The Pirates keep perennial MVP candidate Andrew McCutchen in the middle of their lineup, instantly elevating their OBP (on base percentage). Along with Starling Marte and Gregory Polanco, the top of their order and outfield is set with established hitters. Former Cub Aramis Ramirez holds experience and poise that can help keep his teammates in check, and Pedro “El Toro” Alvarez may provide some pop, but a high strikeout rate could limit his effectiveness as Arrieta allows few hard-hit balls. Their best hope is to chip in singles up the middle or grounders down the line that can turn into alley doubles, along with grinding out at-bats to try and knock “Snake” out of the game.

As for the Cubs, four rookies may start in their first playoff game since 2008. Soon-to-be Rookie Of the Year Kris Bryant, defensive whiz Addison Russell, Kyle “Babe” Schwarber, and possibly rejuvenated Javier Baez will look to keep “playing stupid,” as pitcher Jon Lester tells them. MVP candidate Anthony Rizzo will provide leadership and consistency in the middle of the order, presumably hitting third in between Schwarber and Bryant. After a midseason benching, Starlin Castro took over second base for the first time in his career and became the hottest hitter in the league since September, hitting over .400 in that span. The Cubs will look to “Respect 90,” a mindset star manager Joe Maddon imbedded in his players since the first day of Spring Training. A flurry of depth proves advantageous, with Chris Denorfia, Jorge Soler, and Tommy La Stella all capable of providing a spark.

With two similar teams, the smallest mistakes can make the difference and decide the outcome. Ultimately, the team who can force the starting pitcher to throw the most pitches and knock him out of the game first should come out with the win and chance to play the Cardinals.