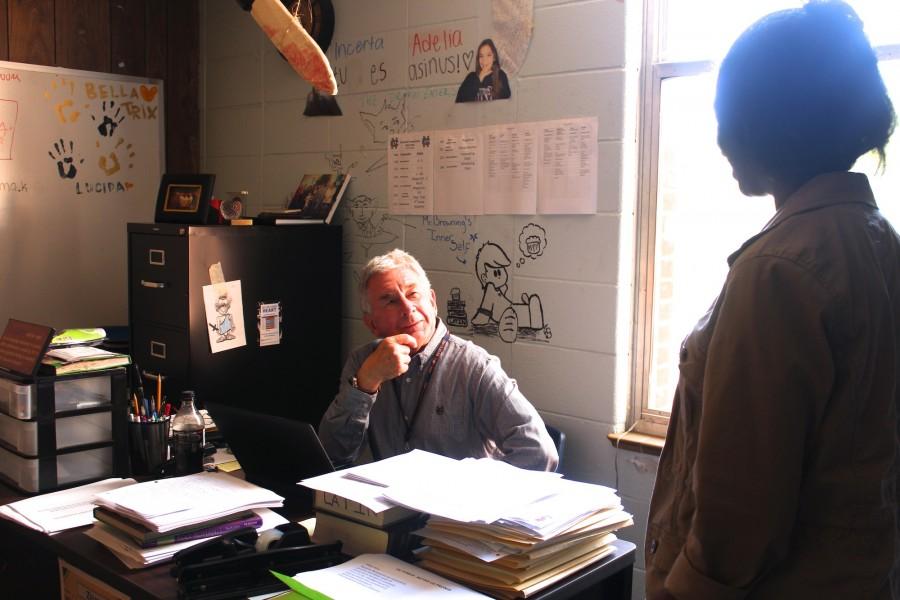 Browning discusses the comic book assignment with his student as she expresses confusion over a particular requirement.

NC’s widely beloved Latin teacher, William Browning, holds a prestigious position as one of the school’s best faculty members. It remains difficult to gain entrance into one of his heralded Latin classes, where he combines content with fun to create a popular learning environment.

“I’m really happy I got into Latin,” said senior Rowan Yeni. “I know a lot of people who put it down but didn’t get it, and Latin was my favorite class last year. I’m taking the second level next semester, and I’m really excited. I love Mr. Browning. He’s just a really great teacher, a really great person, and he cares a lot about his students.”

Yet NC’s World Languages Department Chairperson did not always envision a future in teaching. In fact, for much of his life, Browning did not teach at any school.

“I got into teaching because–how can I put it?–I burned too many bridges and got too old for my other profession,” he admitted. “I made too many moves. I annoyed some people, I liked to get my own way, probably made some bad decisions, and really I just got too old.”

Browning’s career, global marketing and sales, took him from the United Kingdom, to Australia, and then to the United States in 1983.

“That was mainly to do with companies making orthopedic parts for people who break their legs or older people to replace their joints and so on,” he said. “My last job, I was VP of marketing for a company like that.”

After he left marketing, he got into teaching, specifically languages. His first year of teaching took place at Norcross High School in Gwinnett County where he taught Latin and French before coming to NC in 2008.

“You know, living in Canton it’s quite a haul to Norcross, so I wanted to get nearer to home,” he said regarding his decision to work for NC. “I came here and began teaching French and Latin too, but my goal was to make Latin a big enough program that I could be teaching Latin all the time, although I enjoy French also. So it’s worked out okay.”

On teaching, Browning admits he did not get into teaching initially after taking Latin in a London University and observing how most of his fellow classmates appeared to shuttle into the teaching career.

“The thing I was concerned about was that I’d just been in school, now I’m in a different kind of school, university, and now I’m going back to school again to teach,” he said. “And I thought, okay, I’m not bad, but I’m not really all that intelligent and knowledgeable, and I didn’t think I knew enough about life so that if I went to teach, the first thing that could happen to me is that I could have a very smart child, and I would be challenged to know how to keep that person interested if I could not satisfy their needs. So I went and I thought, if I had some worldly knowledge first, then I could always use that experience as a means of engaging the person, because teaching isn’t just about content areas, it’s about developing a child.”

Although not what he planned for himself, teaching children fits Browning well, though he admits drawbacks arrive with benefits.

“It is the hardest thing I’ve ever done in my life, but I enjoy it because you realize that although I was around some important, worthwhile developments when I was in business, although some of them helped people, it wasn’t as real as this,” he explained. “The internal workings of a company for the most part is not real. It’s blown out of proportion and everything else, so this is actually where you begin to affect people. Of course it’s frustrating, it’s disappointing, when you see people you feel that you really didn’t help, but yes, it’s very rewarding.”

Language reveals itself as Browning’s strongsuit. He speaks eight of them: English, Latin, French, Italian, German, Dutch, Greek, and Welsh. Although he insists he does not speak Latin, since people do not speak it on a day-to-day basis, he acknowledges his proficiency in the subject, as well as his love for languages in general.

“I just like languages. It’s just one of those things. Some people have a facility for learning languages and some people don’t, and it doesn’t mean that you can’t learn a language if you don’t,” he said. “One of the most important things about speaking languages is your hearing, because if you listen, you’ll pick up on people’s tone or the way they speak, then that’ll translate into the way you speak. You just have to listen.”

Browning’s efforts certainly made an impact on his students, who express their admiration and liking for the teacher.

“I love Mr. Browning, he’s such a chill guy,” commented junior Joshua Joines. “He always says that your priorities are his priorities, which is really cool. I would definitely say that he’s one of the best teachers I’ve had.”

Throughout his years at NC, Browning has certainly left a lasting impression on the students, and will continue to do so even after he retires.