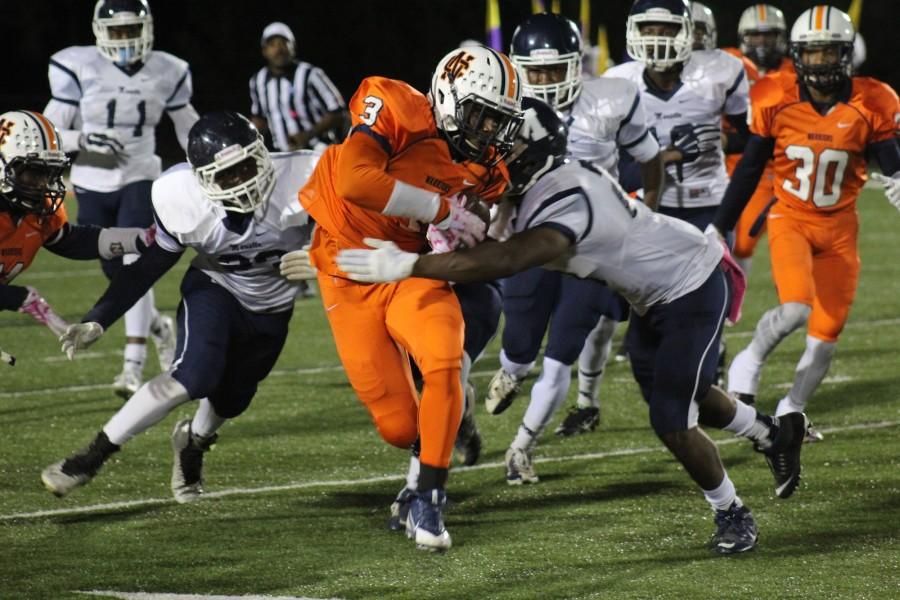 Wide receiver Quannie Green (#3) taking the ball a few yards down the field during the second quarter. After suffering a minor concussion at the McEachern game, Green returned to the field last Friday to help the Warriors defeat the Marietta Blue Devils.

In front of an energetic crowd and after a scoreless first quarter, the Warrior offense found its rhythm and pulled away in a convincing 38-13 homecoming victory over the Marietta Blue Devils on Friday night.

“We played well, this is a great environment and a great community,” Coach Queen said following the game. “There aren’t a lot of places like this one.”

Leading 13-6 and lacking momentum, junior returner TJ Johnson brought the opening second-half kickoff to the Blue Devil 45, giving NC excellent field position. The Warriors capitalized and needed only four plays to score, highlighted by junior receiver Quannie Green’s 33-yard reverse to move the offense inside the 10. Junior running back Jai Erwin performed the rest with two hard rushes to give NC a 20-6 lead, never looking back.

Junior linebacker Chandler Wooten forced a safety later in the quarter, athletically tackling a Marietta receiver in space on a quick screen to get the two points for the Warriors. After junior Drew Tejchman returned the succeeding punt to the Marietta 43, NC drove down the field in 11 plays, 10 of which were runs, capped by a one-yard goal line rush on fourth down by Erwin, to extend the Warrior lead to 23 points.

Freshman QB Kyle Terry added a rushing touchdown in the game’s final minutes, the first of his varsity career.

The Warriors found momentum late in the first quarter as senior cornerback Gilbert Blow intercepted Marietta’s Blake Simpson on fourth down. A few plays into the second quarter, Junior QB Will Lovett connected with DJ Render on a fake screen that fooled the entire Blue Devil secondary giving NC a lead it would never relinquish. Lovett scored again on a one-yard rush later in the quarter.

Marietta Quarterback Malachi Diggs, a NC transfer, did not play due to a groin injury.

The Warriors do not play Friday, so they will use the week off to rest their legs and begin preparing for North Paulding and Kennesaw Mountain, teams currently standing at the bottom of the region.

“We just have to go play as hard as we can so we can get ready for the playoffs,” Lovett said.