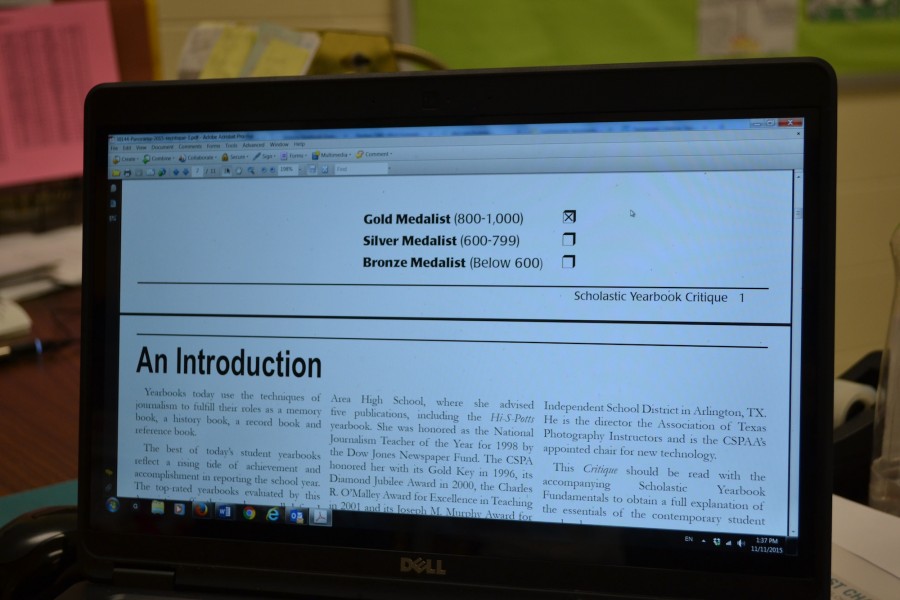 The NC Yearbook staff receives an elite score on their 2015-2016 yearbook critique. CSPA rewards them with the gold medalist title.

After a silver critique last year, Yearbook won their first gold in three years. Under current adviser Jan Husband, Panorama earned three total gold medals in her nine years. While she strives for gold, she prioritizes other factors that provide success.

“We want to win gold again, but more importantly, we want to make the student body happy,” Husband said. There are some features, including senior superlatives and how senior pictures are laid out, that judges do not “like.” However, Husband keeps these features because the students embrace them.

“We don’t want to embarrass anyone, so we won’t show tears after a player takes a loss,” Husband said.

Husband credits her entire staff for providing a team-like mentality and everybody performing each job.

“They work together well,” Husband said. “They’re very cohesive and one step ahead of each other. The people who finish their pages always step in and help others, and they’re really great about that. They all work together as a team. There’s not one person or photographer to do everything.”

While they won gold for last year’s Yearbook, they do not want to rest on their laurels. Co-Editor- in-Chiefs Madeline McWhorter and Maddie Arnold introduced new ideas to help enhance their designs.

“Our goals for this year was to really change up the designs a lot because we wanted to give the yearbook partially a new look,” McWhorter said. “We wanted to incorporate more modern designs.”

This year, as usual, the staff leaders choose the annual theme. After meticulous thought, McWhorter and Arnold finally agreed on a topic.

“Our theme this year is ‘redefine.’” McWhorter said. “Maddie and I thought it would be good with the new principal especially. The school has done a lot of things like the new slogan ‘We Are Orange,’ but it’s not necessarily new, it’s just different. That’s redefine.”

The entire Yearbook staff prides itself on separating from the norm. Husband believes this creates an advantage in the long-run.

“They [judges] knock us for our design because it’s not ‘traditional,’” Husband said. “But I see it as being a trend-setter.”