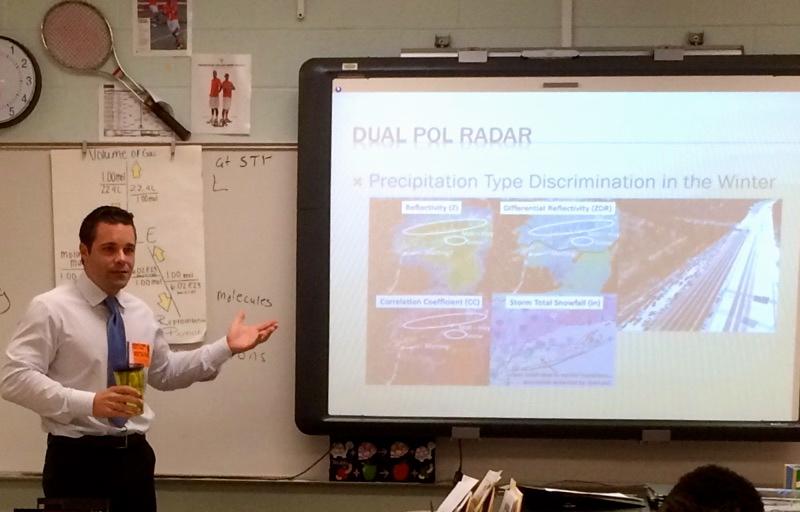 NC’s earth systems class, taught by Herman Wood, received a special guest Monday morning: WSB daytime weather reporter Brian Monahan. Monahan, who discussed meteorology with the class during their weather unit, explained much of the broadcasting that went into weather reporting, as well as the actual science surrounding the forecasting.

“It was interesting and cool to see a weather professional talk about his job,” senior Max Viars said. “He really surprised me because he knew more about weather than I thought he did; I thought he’d talk more about broadcast kind of stuff, but he also talked about really complicated stuff I didn’t fully understand, but it was really cool to see him in action.”

Wood brought in Monahan after talking about bringing in a speaker for his class in the past. After teaching earth systems for three years, he desired to bring in a professional to talk about the job, but he admitted to having trouble making the contact with those he wanted to come in.

“Social media helped me though. I tweeted at some of the folks at WSB and got a person at WSB that facilitated it and made it happen,” he said.

Wood’s direct contact, the chief meteorologist, expressed interest in coming in as a speaker but could not to due to scheduling conflicts. Instead, he sent contacts to a community service facilitator who deals with what the station does in the community.

“Email and social media worked wonders,” Wood said. “I really thought this was important because it took them further and made them more aware of the process of writing a forecast. What steps you take, what things you consider. For example, he will never forecast fifty percent chance rain, because it’s a coin flip. Take a stand. It’s either forty percent or sixty percent. Pick one.”

Wood began teaching earth systems three years ago after expressing an interest to take on the class.

Wood’s desire to teach the class stems from his interest in weather, about one third of the class, and geology, the other third.

“I love weather,” Wood said. “I’m a chemistry and physics teacher by trade, but weather is kind of like, okay, what’s your third science love, and if there’s one I love, it’s meteorology.”

Wood therefore felt very interested in hosting a weather speaker for his class since he knew that one could offer a lot of insight to the material the class was studying. His interest peaked after an interaction over Twitter with a fellow University of Georgia graduate, Dr. Marshal Shepard, former president of the American Meteorological Society.

“He had bemoaned the lack of understanding that youth have for weather and had asked publically what’s the solution, and I tweeted back and suggested a speaker, and asked if he’d be willing to discuss,” Wood said. “Nothing back–cricket, cricket, cricket.”

Yet Wood did not let it rest at that and eventually managed to get Monahan to come in, which the class found both informative and impressive.

“I liked how when he talked he was smooth about it, like he wasn’t on a script, he just came to us naturally. He answered questions really well too, even the difficult ones,” junior Hassan Jawara Saho said. “He definitely added to our class, in my opinion, because seeing his perspective was really interesting, just seeing how the weather is managed and how it’s presented.”
Wood even offered junior Andrew Brady, who expresses interested in meteorology but not taking the earth systems class, a chance to attend the speaker.

“They weather-geeked for a little while,” Wood said.

Brady provided graphics for NC’s Tomahawk Today, and Wood invited him to attend Monahan’s lecture from his chemistry class as an extra student.

“I’ve always been interested in meteorology, since I was about four, and I have been forecasting and researching it since I was nine,” Brady said, who intends to pursue a career in meteorology. “The speaker explained both scientific factors and broadcast factors of meteorology, which I found fascinating. He was really great and explanatory and I enjoyed the presentation a lot.”

Both teachers and students appeared to enjoy Monahan’s lecture and learned a lot from the weatherman.

“He was very beneficial to our class,” Wood said. “So I think it was a success and I really hope to do it again in the future.”