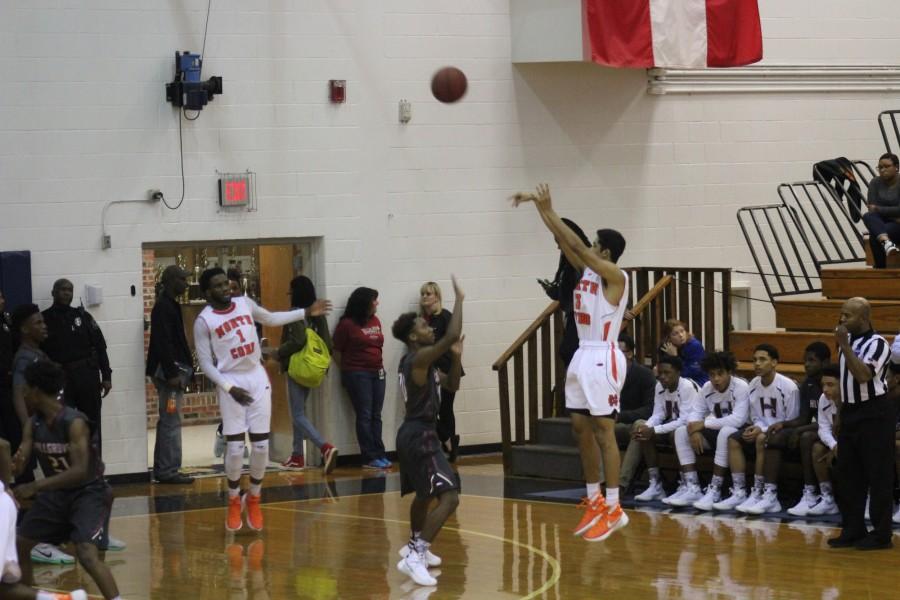 On Friday night, the Warriors battled the Hillgrove Hawks, a team now 2-6 after losing to North Cobb. Guard Myles Pond (#3) sinking a three-pointer in the second quarter of the game. Despite their best efforts, the Hawks were defeated by the Warriors 56-50.

Senior forward Kenny Ume once again led the way as varsity boys basketball extended its win streak to five and remained undefeated in region play with Friday night’s 56-50 victory over the Hillgrove Hawks.

NC trailed by 10 after a low-scoring first quarter, but cut the Hawks lead to just one at the half and took a lead in the third quarter which they would never relinquish. Ume tallied another double-double, adding to his stellar start to the season, scoring 22 points and snatching 15 rebounds, including three “and-1” conversions.

NC (5-3) will battle for region supremacy Monday night as they will square off against McEachern (6-1), who also sports an unblemished in-conference record, in Powder Springs.

“They’re a good team,” Ume said. “We were able to beat them at their place last year, hopefully we can do it again.”