The Weeknd hosts “biggest party in the city” in Atlanta concert 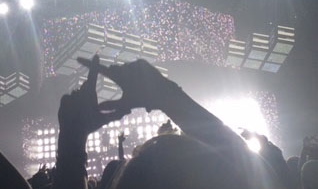 A fan holds up the XO symbol as the crowd begs for an encore, following the conclusion of the concert.

Known to many as “the next Michael Jackson,” popular R&B/pop artist The Weeknd mesmerized fans with his simplistic, yet electrifying Madness Tour set at Philips Arena, on December 15.

The Weeknd’s stop in Atlanta came on the heels of his seven recent Grammy nominations. The artist became extremely popular this year, after previously only appealing to a small, religious group of followers. His Madness Fall Tour stands as his first major concert circuit.

After opening acts by rapper Travi$ Scott and pop singer Halsey, The Weeknd began his set with “Real Life,” a song immediately raising the sold out audience to their feet, where they would remain for the entirety of the two hour concert. Sticking with the trend of mystery, exuded by many modern pop stars, The Weeknd performed his first three songs behind a caged metal wall. The pop star finally showed fans an unobstructed view of himself as he sang “Often” suspended above the stage. The raunchy song, coupled with impressive lights and stage props seemed to give the audience life.

The Weeknd called out to his fans several times during the concert. His line: “Atlanta, this is the biggest party in the city,” was immediately met with deafening screams from fans. He continued his performance with a few of his original songs such as “Professional,” “Crew Love,” and “High for This,” dedicating them to his “day one fans.” Retreating back to his R&B roots, the singer added variety to his otherwise mega-pop concert.

After the brief, but satisfying, throwback, The Weeknd continued with songs from his number one Billboard ranked album “Beauty Behind the Madness.” Fans stood clearly satisfied with the artist’s performance of “Angel” and “As You Are,” songs which clearly showcase his famous falsetto.

The Weeknd wrapped up his concert with impressive, and fiery, displays of his arguably most popular songs: “Earned It,” “Can’t Feel My Face,” and “The Hills.” Immediately after he exited the stage, the arena erupted with chants of “Encore, Encore” and fans unanimously held up their hands in the form of the XO symbol, made famous by his early followers. Almost immediately, The Weeknd returned for one more song, “Wicked Games.”

Despite achieving immense fame in a short amount of time, The Weeknd stands as a seasoned performer. While most pop stars employ background dancers and elaborate sets to accompany their performances, The Weeknd allows his unique voice to drive his concerts. His high range vocals did not falter once throughout the Madness Tour and fans will agree that his songs sound better live than in the studio. Just as claimed, The Weeknd hosted the “biggest party in Atlanta” and exceeded his followers expectations.

The Chant’s grade: A+