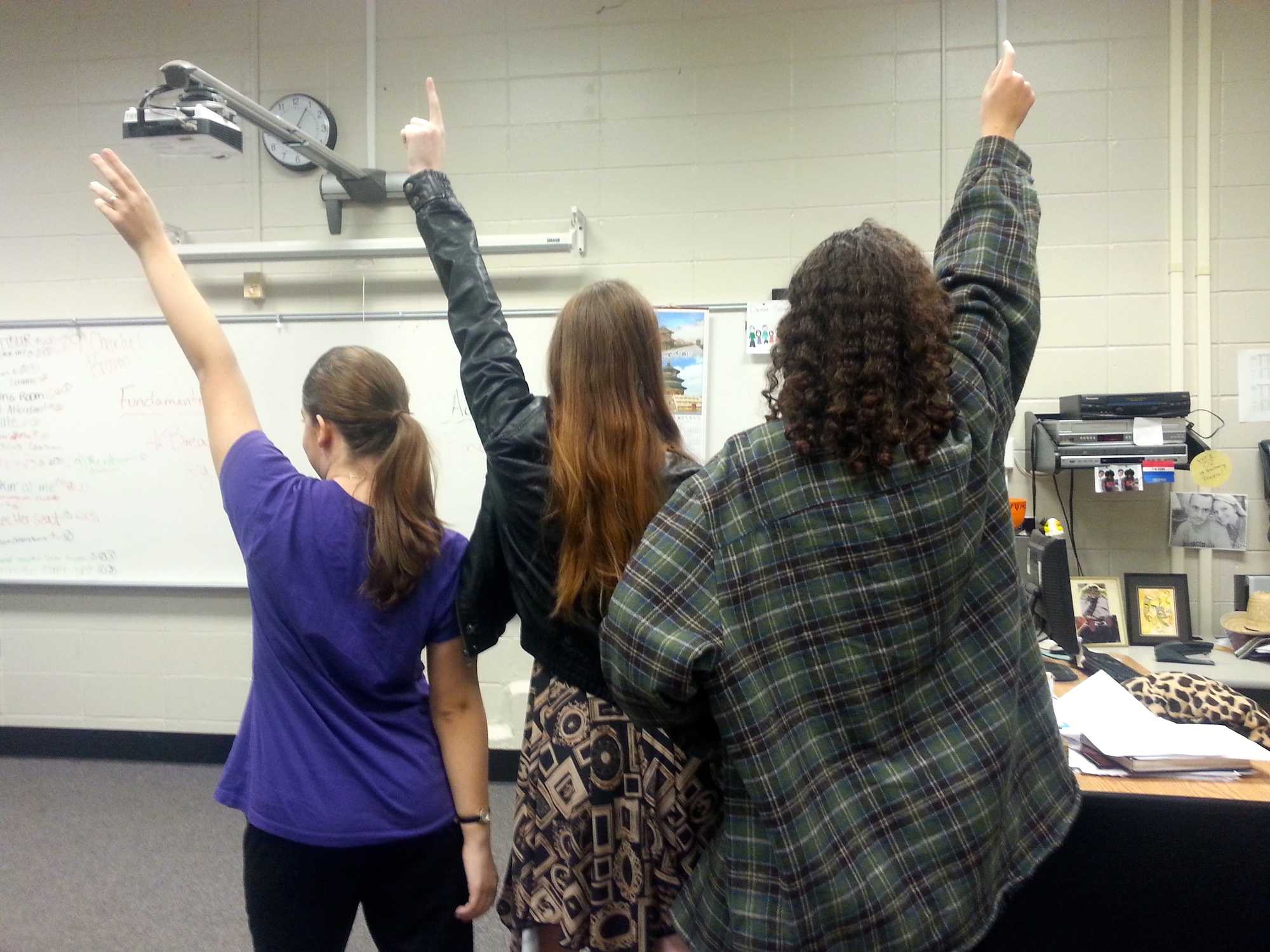 Senior Kelly Vislocky, junior Kat Shambaugh and freshman Hope Kutsche pose in the iconic Schuyler Sisters pose to show they are fans of the musical.

A new musical featuring the story of founding father Alexander Hamilton hit Broadway in the summer of 2015, recently gaining a large following.

“It’s introduced hip-hop and rap to Broadway, which could bring a lot more modern music to new musicals. It’s also the first time I’ve ever been interested in history, and I’ve been motivated to learn more about the Revolutionary War and the founding fathers on my own,” said freshman and superfan Hope Kutsche.

Hamilton, a smash hit written and starred in by Broadway sensation Lin-Manuel Miranda, features a diverse cast of people of different racial backgrounds. Miranda wanted the cast to reflect America today, as the musical shares details about America in the past. People of color take center stage as the main roles in the show, with the exception of King George. Decisions to make the cast completely multiracial excited people of color who dream of the life on Broadway and did not posses opportunities previously.

“I wish that I had Hamilton while I was actually taking American history, because I actually missed a question more than once about the whiskey tax. I’m so glad we have it though, because by giving you names you hear in class a story to remember, it becomes more real to you, and that’s what really helps history stick with people,” said senior Darby Franks.

Hamilton changed the method of casting on Broadway and also inspired high school students to learn more about their history and research the founding fathers. Miranda’s fast paced lyrics and raps teach listeners about Hamilton’s life and his journey from his start on a Caribbean Island to his famous duel with Aaron Burr (portrayed by Leslie Odom Jr.). The musical informs young listeners how Hamilton became the first Treasurer of the US and the roles the other founding fathers played in his life and in the Revolutionary War. Each character helps develop the story in their own way and each actor gives their character a new life on the stage.

Alex O’Brien
The Schuyler Sisters also provide feminist icons because of their incredible strength and resilience showed in the musical. The sisters, Eliza (Philippa Soo), Angelica (Renee Elise Goldsberry), and Peggy (Jasmine Cephas Jones) all play important roles in Hamilton’s and the founding fathers’ lives after their deaths. Eliza Schuyler raised funds for the Washington Monument, spoke out against slavery, and also started the first private orphanage in New York City.

“You don’t usually learn history through rap and I love it, it’s much more entertaining. My favorite song is either ‘Non-Stop’ or ‘My Shot’ because of the interesting beat,” said junior Jacob Jones.

The musical comprises of mainly hip-hop, pop, rap, and R&B songs, making it the only of its kind. The song “Guns and Ships”, the fastest song in Broadway history, sung about Marquis de Lafayette’s role in the Revolutionary War, sports a fast pace which contributes to its popularity on the soundtrack. “Non-Stop”, a song about Hamilton’s role after the war ended and also efficiently wraps up act one with its high energy and harmonies at the end.

Hamilton appeals to a wide range of people of every race, age, and gender due to its humor, interesting music, and historical references.  As a result of its success among Broadway fans, Hamilton hopes to win at the 70th Tonys in June of 2016.  The founding father-based musical will go down in history as one of the most popular musicals to date because of its unique subject and songs.