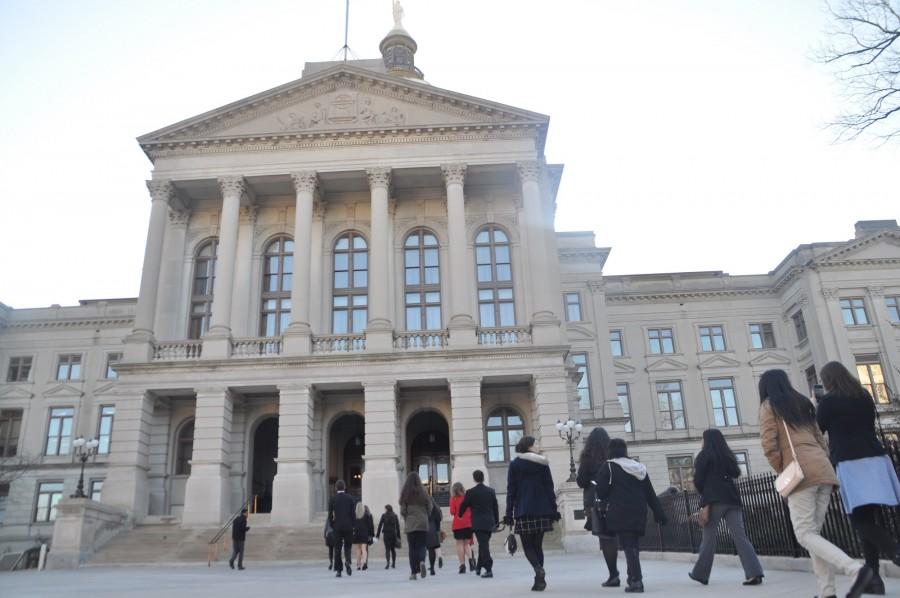 The Acworth Young Aldermen and Kennesaw Youth Council, whose members attend both NC and Kennesaw Mountain High School, visited Georgia’s state capitol. Jordan Watt, an NC sophomore, enjoyed the trip because he “[is] interested in politics and government processes.”

Most Georgia high school students spent Thursday in their classrooms, studying various topics and giving little consideration to anything occurring at their state capitol. NC and Kennesaw Mountain High School students from the Acworth Young Aldermen and Kennesaw Youth Council, however, visited the Gold Dome in Atlanta to better understand their state government. After touring the capitol and meeting their representatives, students realized they underestimated their connection to state government and its impact on their lives.

Students watched from the gallery as Representative Ed Setzler, of Georgia’s district 35, spoke to the House of Representatives expressing his support for house bill 757, which addressed religious officials’ first amendment rights to abstain from performing specific ceremonies. After observing Setzler’s speech and participating in lunch time discussion with the Representative, NC sophomore Jordan Watt felt the day had “kind of humanized [the congressman.]”

Representative Setzler met with the AYA and KYC members for almost an hour, hosting an informal debate where he challenged students to tee up controversial issues. Debating topics including marijuana legalization and the recent termination of the Atlanta fire chief, Setzler’s challenging questions exposed students to the complicated thinking accompanying legislation decisions.

Expecting their day to consist mostly of tours and photo opportunities, students found the direct and lengthy conversation with the representative pleasantly surprising. Junior Shelby Estroff felt the conversation with Setzler showed her “points aren’t as black and white as you thought [about] where you draw the line on what’s wrong and what’s right.”

Representative Bert Reeves, of Georgia’s district 34, and Senator Lindsey Tippens, of Georgia’s district 37,  also found time to address the students, encouraging them to contact the congressmen and involve themselves in local politics. All three representatives assured the students to call them with requests and questions, and Reeves suggested interested students volunteer on his upcoming campaign for reelection.

For Estroff, the trip illustrated several areas where she could further involve herself in the state government. Noticing that the legislation proposed on the House floor addressed issues important to her, Estroff committed herself to becoming “aware of what’s happening and what the choices are.”

On their returning bus ride, members unanimously agreed they and their peers at school should contact their congressmen to become more involved in state politics. Changing major decisions in the state might only take a phone call to students’ representatives under the Gold Dome.