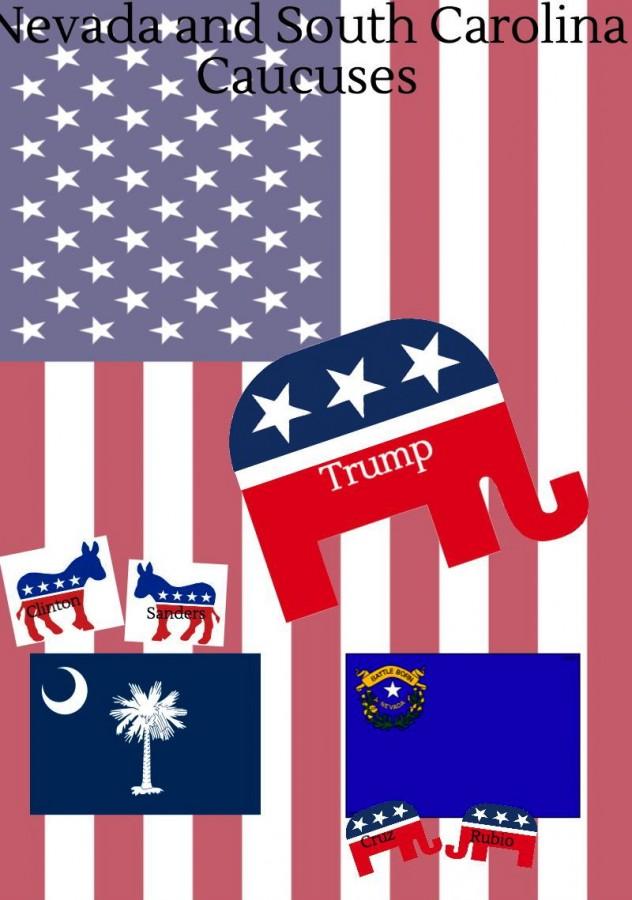 Donald Trump leads the GOP field and Hillary Clinton maintains lead for the democratic race after the latest batch of primaries and caucuses.

This past week held true to many critics and pundits when Donald Trump and Hillary Clinton clinched the past three primaries/caucuses in Nevada and South Carolina.

Coming into the South Carolina Primary, Trump significantly led following his win in New Hampshire despite experts accusing him of hitting his peak and that a knight in shining armor would come to take control of this race. Those pundits ate their words once the results came through, with Trump holding such a massive lead that it got called by 3% of polls submitted.

Senators Marco Rubio and Ted Cruz held a close battle for second and third within a .2% margin. The last three candidates with Jeb Bush, John Kasich and Ben Carson. After the South Carolina Primary, Bush came out and announced his campaign suspension in a heavy hearted, yet highly respected, move.

The same day the GOP held their South Carolina Primary, the Democratic party held their Nevada caucuses, ending extremely close. With Bernie Sanders’ win in New Hampshire, he held the advantage going into the caucus, but Clinton ended up on top with a 5% lead— a heavy blow to Sanders.

Once the GOP reached Nevada, voters predicted a clean sweep with Trump on top yet again, standing true by an astounding amount with Trump nearly reaching 50% of the vote.

After these early primaries and caucuses, the election shows a new tone in the media and among pundits alike. Instead of a race of “who will beat Trump?” and “Sanders the underdog,” it becomes the story of Trump the teflon don and Sanders the hope that will never come. For Clinton, after her win in key states and her projected win on February 27 in South Carolina, she pretty much secured the field as the Democratic nominee. One of the largest surprises in Nevada, housing a large Hispanic population in relativity to South Carolina and New Hampshire, Trump won 70% of the Hispanic vote despite running against Cruz and Rubio, two other Hispanic candidates. This caucus also held the highest voter turnout for the GOP in the history of the state.

A New narrative also began: the decline of Ted Cruz. The republican candidate definitely holds his fair share of controversies, especially after Trump dubbed him a “liar.” Cruz’s main voter basis, evangelical white citizens, ended up voting for Trump, showing that he even lost his most devout voting basis.

Clinton now seems the shoe in to race the GOP nominee in November due to her recent win. Similarly, Clinton has won every Super Delegate in each state confirming her stature in the lead. Sanders now needs to seriously clinch some wins coming soon especially as Super Tuesday approaches.

Trump stays ahead of every single poll for Super Tuesday, including Florida where Rubio holds office, Ohio where Kasich governs, and Michigan where Carson lives. The only state Trump does not dominate is Texas, where Cruz holds his lead by a mere one point ahead of Trump. Clinton holds the same position as Trump currently, winning almost every single state coming this Tuesday, March 1.

As more states conclude their elections, the race ever more seems to start narrowing down between Hillary Clinton and Donald Trump. To say the least, this election season will result in an interesting pursuit.