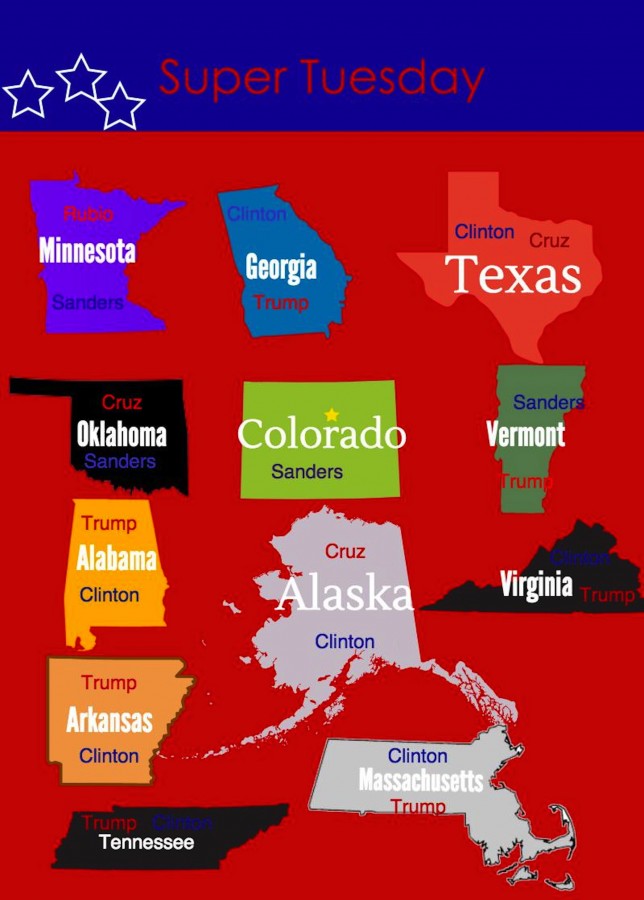 Trump and Clinton all but clinched the Republican and Democrat nominations, respectively. Trump came away with Alabama, Arkansas, Georgia, Vermont, Virginia, and Tennessee. Senator Ted Cruz came out with three states, Oklahoma, Alaska, and his home state of Texas. Marco Rubio came away with one victory in Minnesota, and Ben Carson and John Kasich became largely irrelevant for the remainder of the race. Hillary Clinton came away with every state besides Vermont, Oklahoma, Colorado, and Minnesota, all of which gave Bernie Sanders the nod as the democratic presidential nominee.

With one of the most important days of the election passed, Super Tuesday, two clear winners emerged and it became exactly as predicted. Donald Trump and Hillary Clinton took the night by a storm, winning seven states each, widening the gap from the rest of the field.

For the Republicans, Ted Cruz coming in second with 3 state wins, and Marco Rubio in third with one state win in Minnesota. Trump won Georgia, Alabama, Tennessee, Arkansas, Virginia, Vermont, and Massachusetts, a massive feat considering the wide range of demographics and cultures of each state. Trump ended the night in his speech with Chris Christie, calling himself the true conservative “unifier,” which Rubio uses as his main attraction.

Cruz won Texas (his home state), Oklahoma and in an upset, Alaska. Texas, Oklahoma and Alaska all share one common denominator: their hardcore conservative values. Since the majority of radical conservatives prefer someone like Cruz, it makes sense.

The biggest losers of the night proved the usual; Rubio and the establishment. Rubio, who stood as the main moderate, establishment vote, performed far poorer than expected. This shows the drastic change of the Republican party with the two winners of the night, becoming the outsider and the insurgent candidate.

On the Democratic side, Hillary Clinton destroyed the night with winning over 70% of the vote in 7 states: Alabama, Arkansas, Georgia, Massachusetts, Tennessee, Texas and Virginia. Sanders ended up winning his home state of Vermont, Colorado, Minnesota, and Oklahoma.

The night ended with a clear vision of the DNC, with Hillary on top and Bernie quickly fading into the background with young voters simply not turning out at polls. Hillary’s turnout proved far better, as she received over 90% of the Black vote which surged her to victory.

The 2016 race has narrowed exponentially and it now becomes apparent the voters have picked their nominees, even if the parties have not. 2016 seems to shape up as Trump vs Clinton.