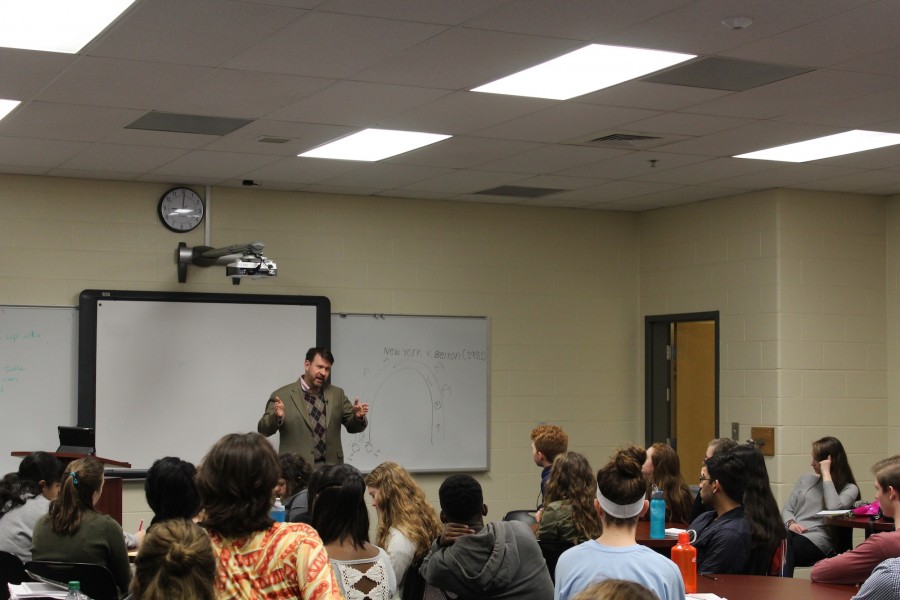 On the overwhelming nature of college, Sanseviro said “sometimes in life, realizing you are in over your head is not a bad thing.”

On Thursday, March 3, Kennesaw State University Dean of Students Dr. Michael Sanseviro visited NC to speak to Magnet senior students in their bundle class. AP Comparative Government teacher Jennifer Biddy and AP Macroeconomics teacher Pamela Roach decided to invite Dr. Sanseviro after seeing him speak at a panel, as his knowledge regarding the college process would surely benefit the seniors.

“I think we’ve handled bringing in former high school and college people to talk to [the students], but never anybody from a college setting, and I really thought his expertise as the Dean of Students would be influential and more powerful to our students in the long run,” Biddy said.

As the Dean of Students, Sanseviro’s responsibilities include overseeing student life, activities, leadership, and academic integrity of KSU’s 34,000 students. “You’re not in class a whole lot when you’re in college,” he said on the importance of his job, noting that although he does not deal with student academic life, he holds responsibility over just about everything else.

Biddy and Roach encouraged students to ask questions regarding the college experience, as most of them plan on attending this fall. Topics ranged from balancing clubs, jobs, and organizations with schoolwork, college honors societies, studying abroad, building connections with professors, and even more serious topics like the dangers of partying and sexual assault on campus. “I deal with everything,” Sanseviro said on the more controversial aspects of his job.

Sanseviro urged students to not stick to what they have always known in college, as pursuing clubs outside one’s interests can lead to the discovery of new passions. He cited his own unusual personal experience of joining the glee club at Emory as evidence, telling students to “not limit themselves.”

Utmost, he prompted students to embrace their college experiences, stating that although they may feel confused, frustrated, and stressed surrounding its difficulties, “the number one biggest success in college is being there.”