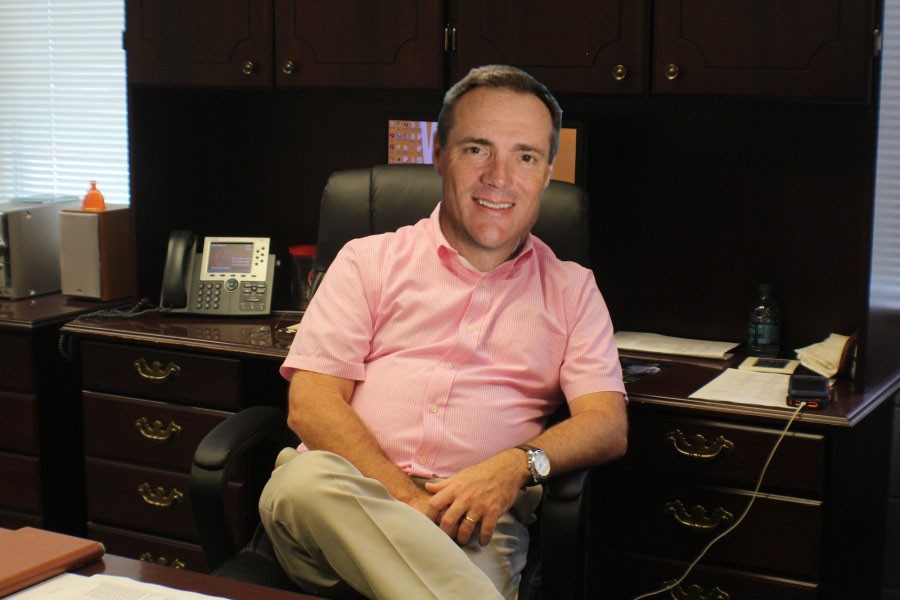 After a shocking revelation, Principal Bucky Horton revealed himself as Dr. Phillip Page on Tomahawk Today

As Spring Break approaches, NC and students and staff feel itchy from spring fever and pollen allergies, a shocking development has taken the school by storm. First-year Principal Bucky Horton revealed himself as former Principal Dr. Phillip Page in disguise, and the entire school year thus far will be aired as a miniseries for popular reality TV show,  Undercover Boss.

On a seemingly normal episode of Tomahawk Today, “Horton” delivered one of the many fiery pep talks he does throughout the year, this time about Spring Break. Just as his speech dwindled down, a new topic arose.

“The 2016 school year has resulted in a ton of changes, as you all know. But as we hit the home stretch and with AP exams arriving, I wanted to bring something to your attention. I am not who you think I am,” Horton said.

After a dramatic scene of the NC Principal tearing his costume off (reminiscent of Mrs. Doubtfire’s dinner scene), the school watched in awe as Page’s familiar face appearing on the screen.

“I wanted to see how the school would run without me here, so I contacted Undercover Boss and they loved the idea,” Page said. “After the first two weeks I realized everything went pretty smoothly, but I honestly just wanted to see how long I could go on with this. I tricked all of you! HA!”

Reports show that even Page’s son Chris, a junior at NC, did not even know that his father had secretly still been there the entire time.

“I’m honestly still really confused how he did it,” the younger Page said. “He’s driving one car to school and comes home with a different one. And what about ‘Mr. Horton’s’ sons?”

After further research, Jackson and Will Horton, two NC students, are actually undercover themselves as NC’s former administrative and married duo, Dr. and Mrs. Kolen, respectively.

The two could not be reached for comment, but the NCAA now investigates the matter, as Will Horton (Mrs. Kolen) currently ranks as the top kicker in the nation for the 2017 class.

Page finished his triumphant reveal on Tomahawk Today by signing off with his usual catchphrase—but with an eerie twist.

“I’ll see YOU in the hallways… but you won’t see me,” Page said, handing the stage back to the dumbfounded anchors, senior Lexi Medina and junior Emmett Schindler.