Trump vs. Clinton: An inevitable outcome 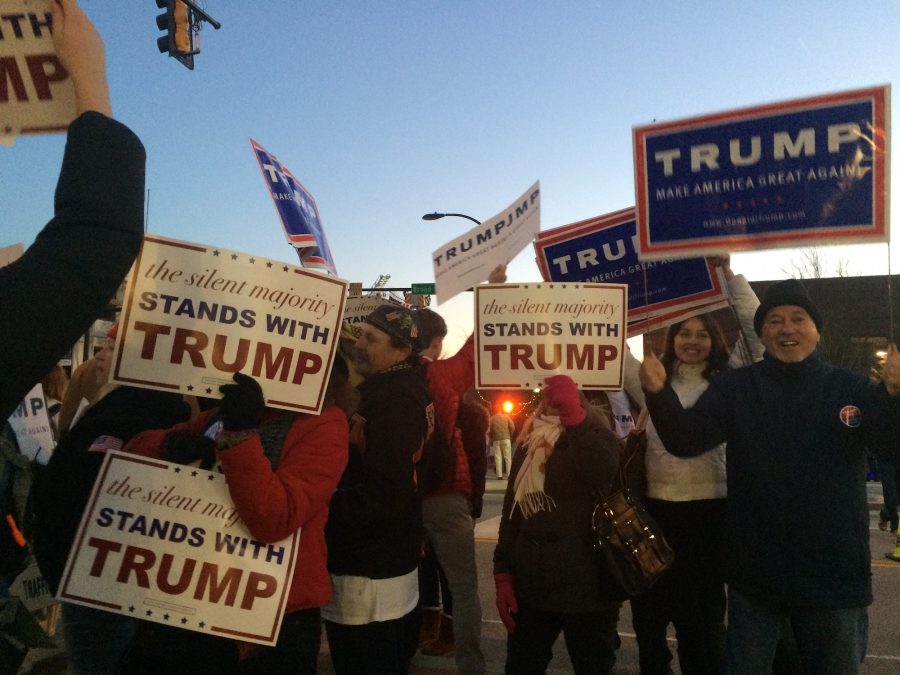 Outside the Greenville GOP debate, Trump supporters rep their signs and gear foreshadowing the support following Trump into the primary season.

This primary season culminated as a joke to some and a fear to many, but as it comes closer to the end, time becomes serious. Following the New York primary on April 19, the two front runners yet again reign supreme.

In the GOP field, Donald Trump finished on top in New York, claiming 89 delegates with 60% of the vote, leaving only four for Governor John Kasich who claimed 25% of the vote.

After the massive win in New York, the race slowly becomes clearer for Republicans. Now only one candidate can actually reach the 1,237 required for the nomination: Donald Trump. Senator Ted Cruz, who dubbed himself as the only one who can actually beat Trump, has now been knocked out of the mathematical way of winning without a contested convention.

The upcoming states starting next Tuesday look promising for Trump, seeing as he holds 40% or more in each state of: Connecticut (28 Delegates), Delaware (16 Delegates), Maryland (38 Delegates), Pennsylvania (17 Delegates), and Rhode Island (19 Delegates).

The map after that still appears pro Trump, which now shifts focus from one theory of a contested convention to Trump versus Hillary Clinton. Of course, there still lingers a possibility that Trump can not receive the 1,237 delegates, and the GOP will go into a contested convention where both Cruz and Kasich hope to make their stand.

If it comes to a contested convention, then Cruz becomes poised to win with recent allegations of promoting pro Cruz supporters to vote for him on the second ballot. Trump accuses the GOP of “rigging the system” for him to lose, even though he still holds a massive lead.

Trump massively shifted his focus to work on the November election against Hillary, recently announcing a more presidential toned speech, outlining foreign policy in Washington which critics repeatedly attack him for having a lack of knowledge on the subject.

If polls stay the same in every state from here on out, he will win with 1307 delegates, but there still stands the possibility of a large shake up in an upcoming primary modifying the whole race.

For the DNC, the tale repeats as Hillary Clinton wins the New York Primary with 58%, leaving Sanders in the dust with empty hopes to come back.

To analyze these numbers and possibilities, the outcome appears clear now as theorized before: this will be a race between Donald Trump and Hillary Clinton. The struggle now remains the candidates’ outstanding issues. Trump must work on his tone and his blatant statements which cause wide offense to many, and Clinton to convince Republicans to vote for her and to avoid indictment from the FBI for her email investigation, not to mention her prominent Benghazi scandal.

The race truly will not be decided until November and with all the shake ups and craziness this primary season, it remains up in the air if both of the candidates will create more controversy or even still be around by November, running this race totally out of control.