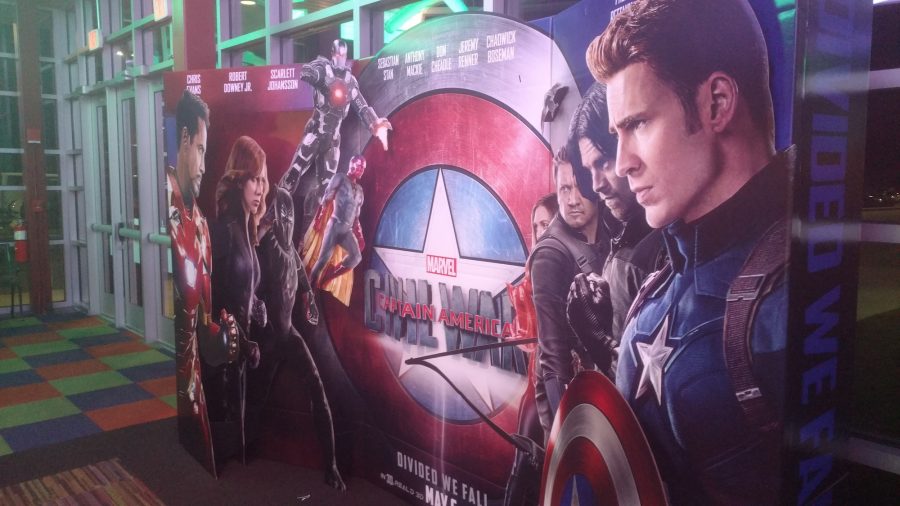 Movie theaters across the nation set up exciting promotions for Captain America: Civil War, which hit theaters May 6, 2016.

As the first segment in phase three of its cinematic universe, Marvel’s newest film Captain America: Civil War hit theaters on Friday, May 6, 2016.

At first glance, the story characterizes as a raucously fun action flick. The cinematography, including shots filmed in Atlanta and Berlin, formulate a major statement piece. Directors Anthony and Joe Russo packed each fight sequence with action. Characters exchange witty banter throughout the movie, keeping the audience laughing between the thought-provoking and morally ambiguous drama.

Boseman’s introduction as Black Panther shone the most out of the movie’s characters. The superhero, also known as T’Challa and the king of Marvel’s fictionalized African nation Wakanda, finds the most redeeming character arc in the movie as he deals personally with loss and questions of morality. Pairing an updated costume reflecting his time in the comics with Boseman’s skillful characterization, Marvel gives life to a hero with captivating motives and major promise in the 2018 Black Panther movie.

The inclusion of Spider-Man, the young Peter Parker, added an extra kick of comic relief to an otherwise tense movie, and Holland’s portrayal of the famous superhero, though highly contested among fans, turned out to accurately represent the character’s witty repartee and young-minded ideals. Though the arachnid hero participated only briefly in the action, his scenes offered a positive outlook on the future of Parker.

After the initial excitement of the battle passes, though, the movie reveals an incomplete conclusion. The ending, especially the last fight scene between Stark, Rogers, and Barnes, felt inconclusive and displayed lazy writing on the Russo brothers’ parts. The story allows them opportunity to drastically change the Marvel universe to keep audiences interested for future storytelling. But with no climactic ending, the entire movie felt irrelevant. Furthermore, it feels as if Marvel ran out of time or money to explore the effects of the “war,” putting it off to promote their sales on the next movie. Ultimately, Marvel’s past hits and usual dedication to enriched storytelling showcases that they can do better than succumbing to the money-making tactics of Hollywood.

Captain America: Civil War brings suspenseful action scenes and laughs to audiences at first glance, but falters when further pondered. While Marvel attempted to make an action-packed and tense movie on a superhero Civil War, what they churned out mirrored the War of 1812: an overly dramatic battle ending in irrelevance.

The Chant’s Grade: B