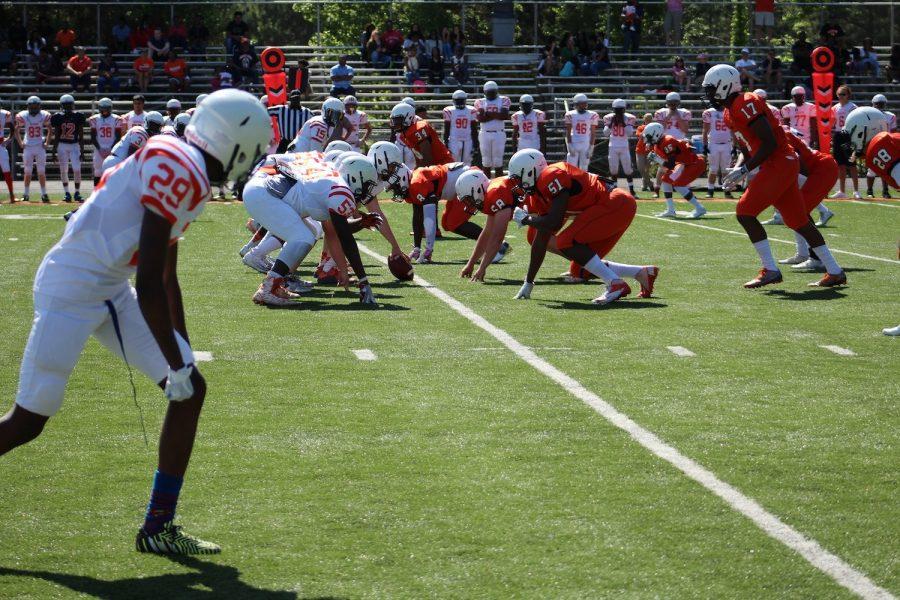 Last Friday, the Warrior football team battled against themselves in the spring game. Half of the team wore white jerseys, while the other half sported orange.

The NC football team played its annual spring scrimmage at 4:30 on Friday, May 13. Coach Shane Queen put a twist on the game this year, adding unique one-on-one challenges before the first, second, and third quarters.

Queen awarded three points to individuals in a “circle of life” competition, which pitted top players from both the Orange and White teams against each other in a show of strength and one-on-one blocking and driving technique. The winner of each round won his team three points before the first quarter. The White team entered kickoff with a 12-9 lead.

In the first quarter, the white offense drove the ball down inside the red zone before turning possession over on downs. The Orange offense failed to generate much production and stalled out in three plays. This trend continued through much of the game, until rising senior quarterback Will Lovett threw a jump ball for a touchdown in the beginning of the second quarter.

The break between the first and second quarters showed off the Warrior’s kicking depth, as rising senior Will Horton represented the Orange team and kicked against two other NC kickers. The White team kept a three point lead heading into the second quarter.

Before halftime, the White team managed to create an insurmountable lead, pulling ahead by 21 points after a series of broken tackles and an 80 yard run by rising sophomore and probable future NC quarterback Kyle Terry.

After a halftime that placed offensive and defensive linemen in one on one pass rushing drills, the orange team attempted to mount a comeback, converting two 2-point conversions and pulling within three.

Coach Queen said after the game that he “feels like there’s an energy around this team that there hasn’t been for a long time.” Queen’s team certainly demonstrated promise, as the pass rush looked relentless, the defensive backfield locked down receivers, and offensive ball carriers like Will Lovett and C.J. Cole demonstrated more speed and tackle breaking abilities than in previous seasons.