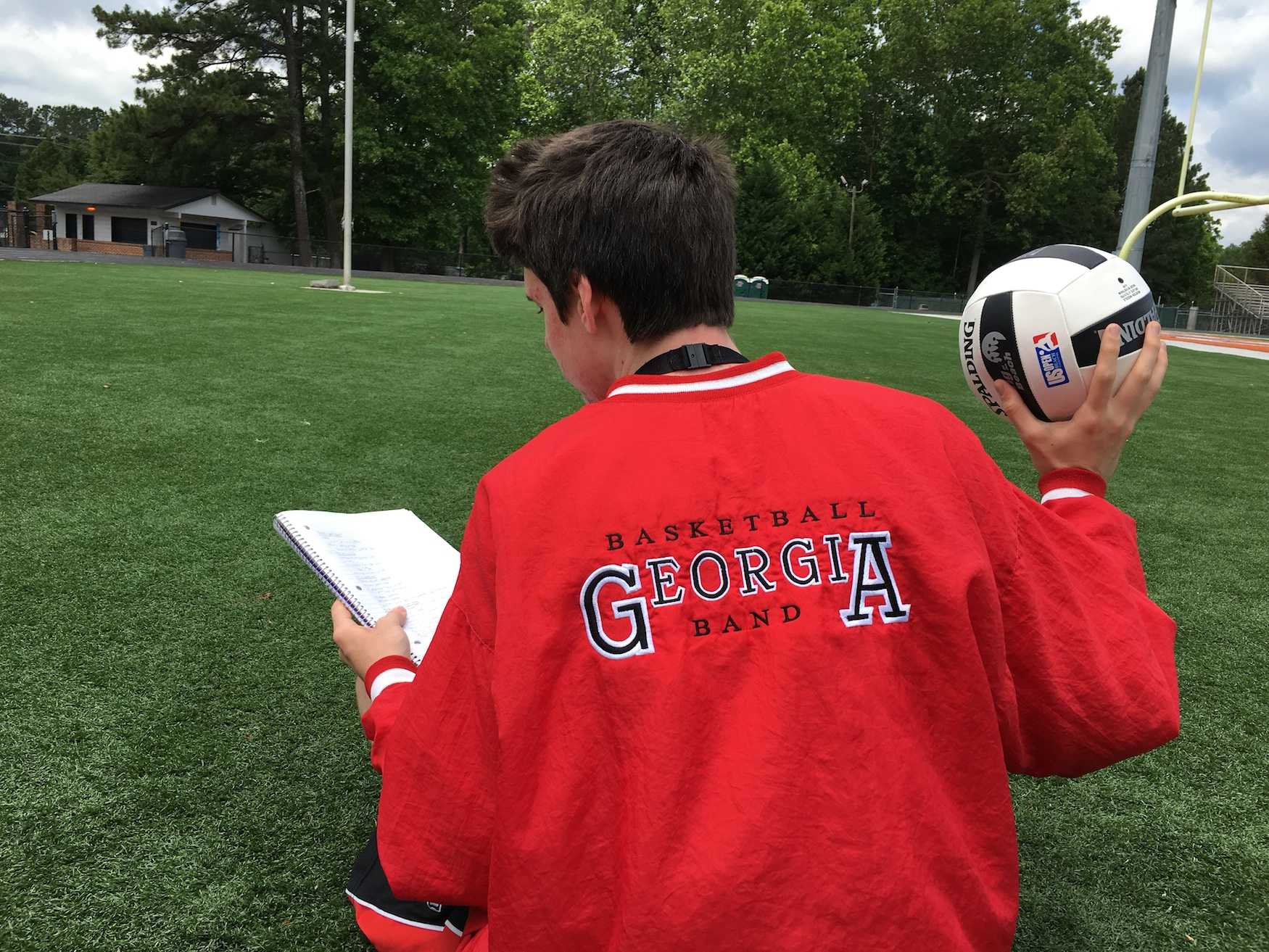 Magnet athletes struggle with homework and studying, while balancing out their athletic career as well. (Emmett Schindler)

Magnet athletes struggle with homework and studying, while balancing out their athletic career as well.

Academics always come first, at least for NC Magnet students. While they bury their heads in books, some emerge from their notes to prove they can do more than just earn all A’s.

“I couldn’t imagine playing a sport while handling Magnet, especially during junior year. I see my friends do it, but there’s no way I could,” senior Jack Pearson said.

Despite the common misconception that Magnet students only study and complete homework, many join the sports teams NC offers. From soccer to swim, they show the school their ambition to push themselves in both academics and athletics.

Junior Michael Vollbracht exemplifies the Magnet mindset. While dealing with the infamous AP Environmental Science/Advanced Scientific Research bundle, he finds time to play his most beloved sport: soccer. Even knowing about his chaotic school schedule, “[he] was very sure that was going to keep playing.”

Since freshman year, Vollbracht continues to efficiently deal with both schoolwork and soccer priorities. His success comes from the support of his friends.

“I asked some Magnet kids that had played soccer if I could deal with both the academics and the sport, and they said it takes a lot of work, but that I can do it,” Vollbracht said.

With all his accomplishments in high school, Vollbracht showcases talent both on and off the field. Even in the spotlight, though, the obstacles still appear.

“If we have a game, which usually lasts about four hours, I can’t do homework. I get home so late and it’s really hard for me to do any of it,” Vollbracht said.

When it comes to moving on to college, soccer “is a little too much” for Vollbracht. He plans to hang up the cleats after senior year and attend the University of Georgia where he wants to major in business.

“Magnet doesn’t mean you have to be stuck on one thing. If you can manage your time usefully, a sport will not get in the way,” Vollbracht said.

Taking a dive into a new sport, junior Barrett Vance spends his off time swimming for the NC varsity team, while also balancing marching band. Vance began swimming eight years ago and continued at NC in the path of his brothers.

“Both of my brothers swam and did Magnet, so I figured that I could balance it out like they did. “I knew I was gonna swim when I decided to do Magnet. I figured it was only right since my brothers did the same thing,” Vance said.

As the youngest in his family, Vance witnessed the success of his two brothers going through the Magnet program at NC, being star swimmers as well. Without a doubt, he knew he wanted to follow in their footsteps, joining the team his freshman year.

But with passion comes struggle. At first, Vance battled with coping with swim team and his lack of time for homework, plus his motivation to study. He knew the future required change.

“Originally, I started falling behind in things and I would procrastinate. But then I realized I need to change the way I did my work, so I started scheduling when I would do things, which helped me to get stuff done better,” Vance said.

Like Vollbracht, Vance plans to let go of swimming after high school and attend college for a different passion.

“I don’t think swimming is in my best interest to carry it on to college. I just want to go for school, somewhere like Georgia Southern,” Vance said.

Junior Celina Cotton joins the list of magnet athletes by playing on the NC varsity basketball team. Basketball played a crucial role in her life since the age of five, dribbling its way into her high school career.

“Because I hadn’t already been in Magnet, I hadn’t realized the time constraints, so I didn’t know being an athlete and being in Magnet would be so complicated,” Cotton said.

The beginning came with and without promise. Cotton immediately made the varsity team her freshman year, a difficult feat, but Magnet curriculum and time struggles still plagued her.

“It was a struggle at first when I made the varsity team as a freshman. To come in being a new student in Magnet and to be on varsity is pretty overwhelming,” Cotton said.

However, nothing stopped Cotton from succeeding in both girls basketball and academics.

“You learn to cope with the long nights and early mornings and long practices and all the assignments that come with it,” Cotton said.

As for college, Cotton currently “is still up in the air right now, but something [she is] definitely considering.” With a couple of schools watching her, she waits to find her best option.

Moriah Hopkins, a junior in the NC magnet program, arrived with two sports under her belt: basketball and volleyball. With the implications of Magnet in mind, she decided she only wanted to pursue one sport.

“It’s not that I didn’t want to play [basketball] anymore, it was just a matter of which I would have a better chance of getting a scholarship with and I got a better opportunity playing volleyball and chose to focus on that,” Hopkins said.

Starting freshman year, she stayed loyal to volleyball. Despite dealing with all the homework, games, and practices, she effectively maintains a balanced schedule to make use of all her time.

“It’s really just time management and prioritizing things. You have to make sure you know what’s most important to get done and have everything planned out so you can still go to practices and whatnot,” Hopkins said.

With more passions in her athletic career than a typical high school student, she jokingly claims she “has actually had second thoughts about school.” While the days go by, Hopkins prepares for her next step in volleyball: college.

“I’m going to Xavier university in Ohio for volleyball, where I have a scholarship,” Hopkins said.

Truly representing a scholar athlete, Hopkins continues to live up to the dreams she set and take her talents to the collegiate level.

These four students proved to the school their ability to balance magnet and the sports they work so hard at. The feat seems impossible, but these athletes exemplify the outliers. When it gets tough trying to balance out Magnet and athletics, Cotton gives one piece of advice: “Keep it moving. Just keep going.” 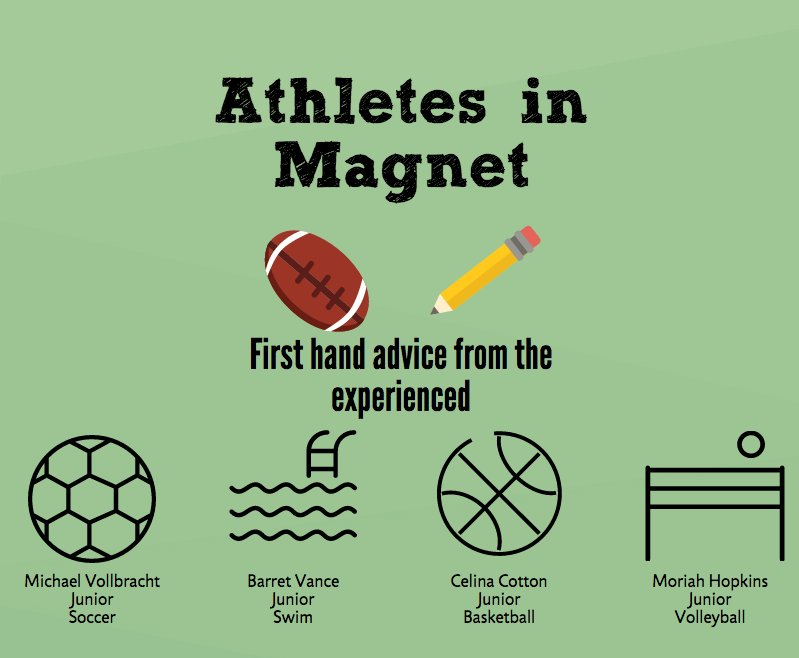