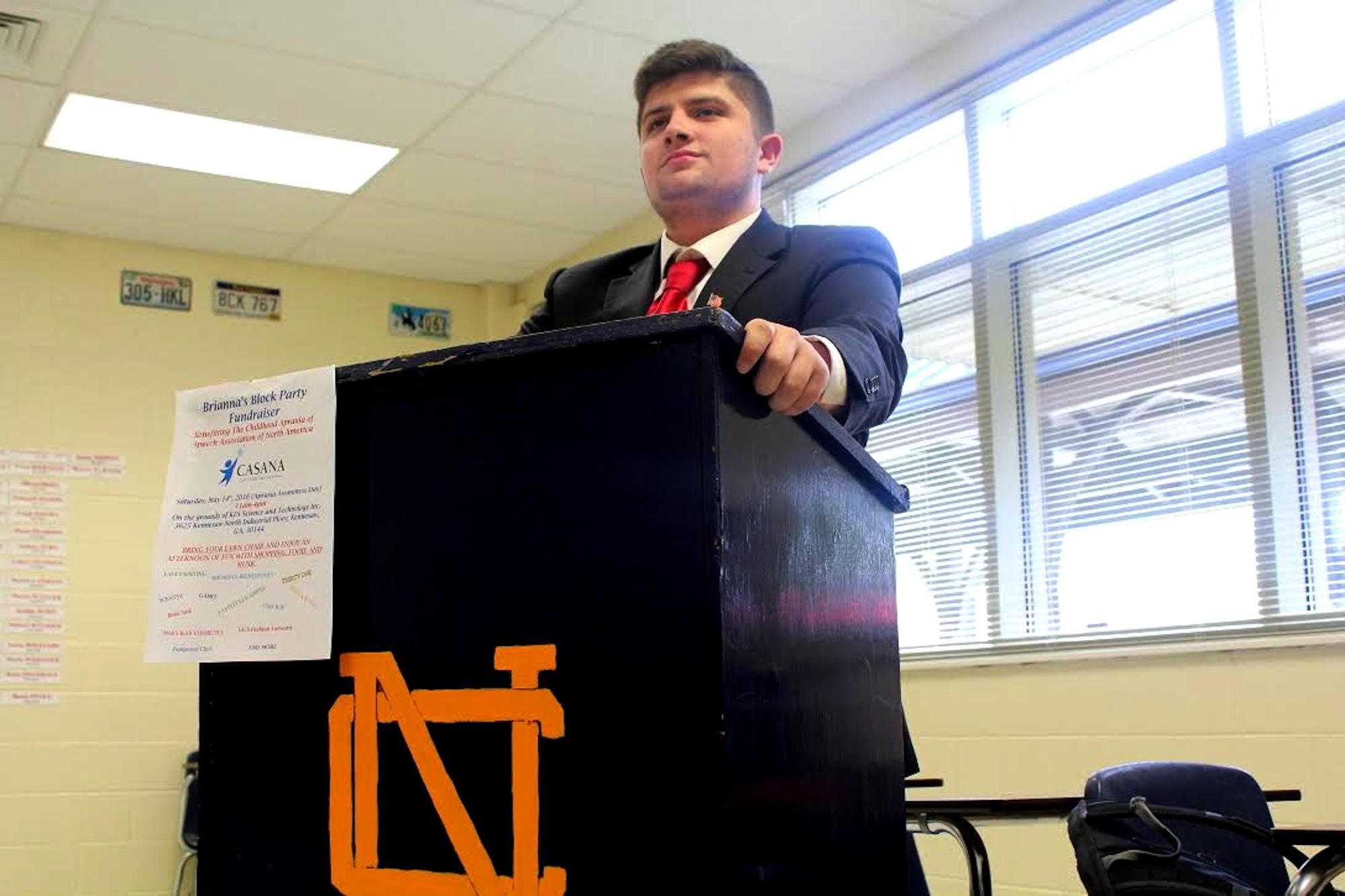 Junior Dylan Kellos began working on campaigns in January, and plans to continue work in the field of politics for the remainder of his life. (Michael Smith)

Junior Dylan Kellos began working on campaigns in January, and plans to continue work in the field of politics for the remainder of his life.

Dylan Kellos, an NC junior and Chant staff member, began defying the expectations of a high school teenager in January, 2016 by joining a political campaign, allowing him to meet senators, governors, and millionaires over the course of five months.

His experience began after receiving an email asking for volunteers for Republican and potential presidential candidate Donald Trump’s Georgia campaign. Kellos drove down to Atlanta and worked until nine o’clock that evening. He started by putting signs together, constructing over 500 in his first six-hour shift. As he continued with the job, he often mixed work for both school and campaign projects until two in the morning. His achievements and work ethic quickly earned him the trust of his coworkers and bosses as Kellos continued to gain increasingly important roles, moving from organizing parking to monitoring VIP treatment, and eventually helping manage entire rallies.

“Even though I am 17, my bosses saw that I can work as hard, if not harder, than people twice or three times my age,” Kellos said.

Kellos first gained an interest in politics at a young age and cites his patriotism as part of his inspiration for becoming involved: “I’ve always been interested in what goes on in the world, and after taking the backseat and just watching everything happen, you get tired of it and you want to be part of it. You want to see how it actually works,” he said.

Kellos originally thought experience on a campaign looked impressing on resumes and provide him insight into the workings of American politics and elections. But his bosses recognized his motivation and potential, eventually entrusting Kellos with directing over 20,000 supporters and protesters at rallies in Atlanta and Valdosta.

Kellos loves the direct relationship between his work and its outcomes, saying “What you’re doing, it makes a difference to somebody, even if it’s at the most local level.”

A mayor can impact thousands of people by speaking with and helping them, and a president can help billions of people around the globe. Ultimately, Kellos wants his shot at helping and improving the lives to hundreds of millions of Americans.

In the immediate future, however, Kellos plans on focusing on a more local level of the American public, having interviewed and written on the importance of community on individual’s lives. Kellos aims to join the military after secondary education and gain insight into the workings of America’s military. He also plans on running for city council or mayor as soon as he becomes eligible.

Before his eligibility date comes, though, Kellos practices politics in NC’s Model United Nations (MUN) program. He quickly became a leader in the club, winning awards and extending experience in public speaking and negotiation.

“Model UN has guided my ability to discuss important issues with people I don’t always agree with,” Kellos said. “It also provided me with a perspective in how to lead with confidence through public speaking. I can debate and discuss issues with anyone, so long as they respect my opinions while I respects theirs.”

Kellos felt unquantifiable pressure to achieve during the early months of his work.

“I was afraid, I was terrified,” he said. “I was dealing with something way over my head and always thinking ‘what if I screw this up?’ It’s not if I screw up, I get an F, but if I screw up, this could impact the fate of my state, my country, and the people around me.”

Kellos also felt pressure from his school and peers. Since announcing his participation in Trump’s campaign in April, people tore off stickers off his car, removed signs from his yard, and passively opposed any mention or open support of the highly controversial candidate. Even teachers at NC spoke openly against Trump’s policies.

Kellos, who naturally leans towards long-windedness at times, stopped discussing his personal views and opinions with his peers: “People would figure out who I worked for and hate me. I feared that friends I’d had for years would change their mind because of who I worked for before I got the chance to defend myself, and I love everyone on Newspaper staff and I feared they would grow to hate me as well,” he said.

Despite some of the hate, Kellos felt refreshed and relieved after informing people on his occupation. The relief, provided by openness on the situation, helped Kellos find a more down-to-earth place mentally. He faced immediate intrigue and questions, but the pressure of the situation dissipated quickly. The only exception came from Kellos’ Current Issues class, where classmates essentially interviewed him the first day they found out and Kellos spent an hour and a half answering questions. Since then, Kellos debates nearly every day and occasionally leads the class on global issues.

“Telling people helped me see that maybe politics isn’t all that matters because after four months [of working on the campaign], the only thing that went through my mind was numbers, politics, and polls,” he said.

Since the conclusion of the Georgia nomination, which the Trump campaign won awards for in an unexpected victory over Marco Rubio, Kellos worked for Georgia Senator David Perdue and on campaigns in Florida and South Carolina. At the end of April, Kellos started his own local company, Oasis Landscaping. He bought a truck and began using equipment from friends and family to travel and work for customers. Kellos plans on taking all his proceeds from work and putting the money back into his company, buying and improving his assets and equipment while funding advertising to expand his client base.

Kellos looks to work on the general election until November and then possibly work for Senator Perdue. He relies on the connections he made traveling and working for the campaign and scholarship opportunities at the end of his senior year. Long term, Kellos wants to work his way up the political ladder, starting with Kennesaw City Council and eventually reaching, if all goes as planned, the Oval Office.

Kellos’ future holds a lot of questions, but all promise happiness: “I don’t know exactly what I’ll be doing, but I know it will be a good job,” he said.

Kellos, drawing on his wealth of experience, believes he can achieve whatever he sets his mind to. No one can answer whether or not all his goals will transpire in his lifetime, but Kellos’ fantastic analytical and planning skills, superb speaking abilities, and undeniable charisma provide him with a foundation for future success.