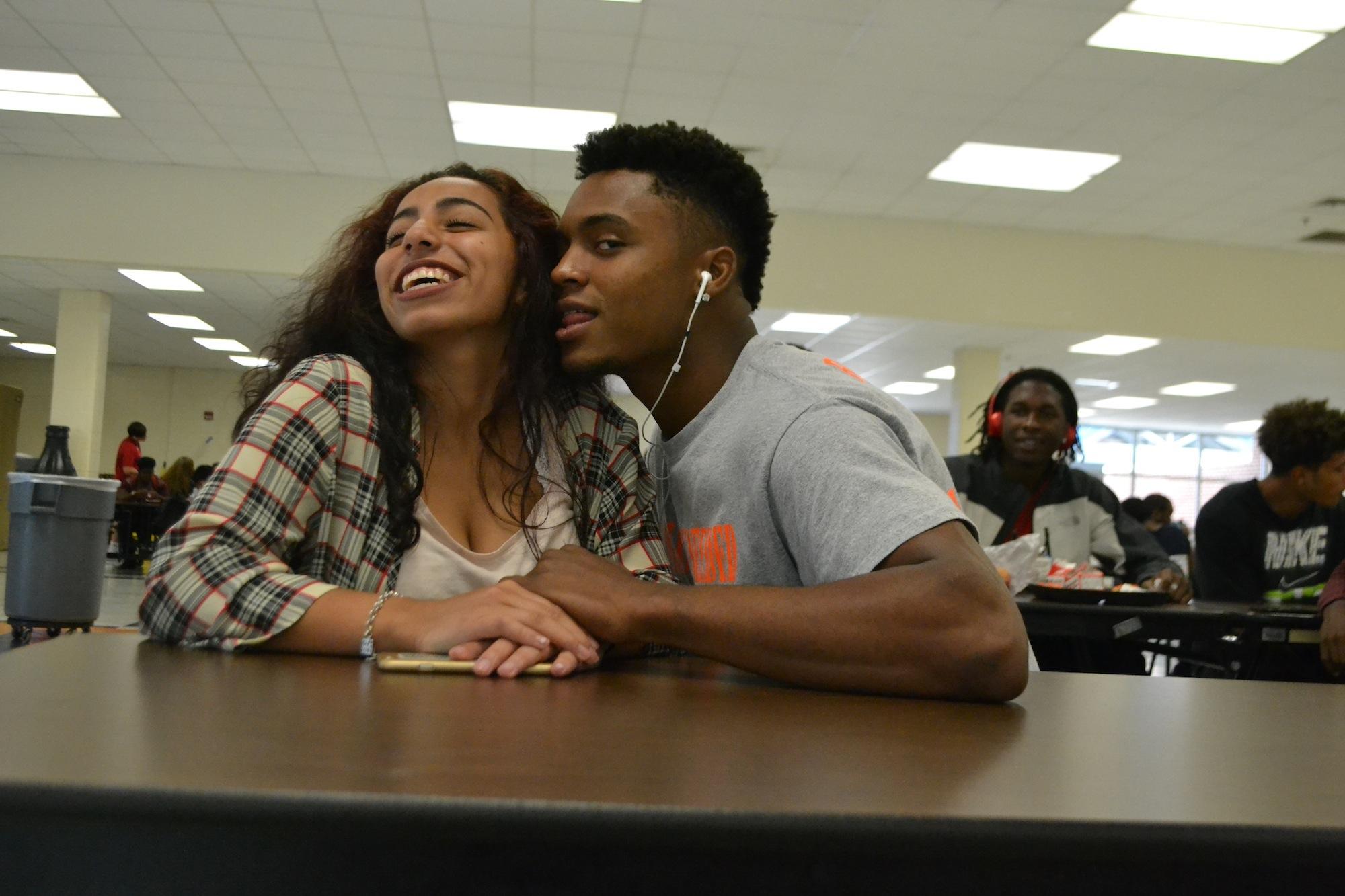 NC students Kallie Chabla and Larry Bryant canoodle at lunch. When asked how rom-coms make her feel about her relationship, Chabla said, “I know that these movies are fake and most of these things don’t actually happen in real life, but, when I see the handsome guy telling his girlfriend he loves her even though his parents don’t approve or whatever, it can make you feel like you’re not as loved as you could be.” (Nadya Awino)

NC students Kallie Chabla and Larry Bryant canoodle at lunch. When asked how rom-coms make her feel about her relationship, Chabla said, “I know that these movies are fake and most of these things don’t actually happen in real life, but, when I see the handsome guy telling his girlfriend he loves her even though his parents don’t approve or whatever, it can make you feel like you’re not as loved as you could be.”

Defined as “an intense feeling of deep affection,” love constitutes one of the most prevalent themes in all genres of film, especially romance movies.

Filmmakers create exaggerated stories telling us what romance should look like, but when do these situations occur in real life? People seldom experience love at first sight, find their soulmate, enjoy the perfect relationship, or pursue their crush relentlessly. Portrayed in almost every romantic movie ever conceived, unrealistic concepts of love skew people’s expectations for relationships by creating fictional scenarios that nearly never occur in reality.

Love at first sight describes an instant mutual attraction between two people. Films showcase it as the moment where the angels sing and wedding bells toll as a stranger walks through a crowded room.

In Achilles Tatius’ Leucippe and Clitophon, Clitophon describes his own experience with the phenomenon: “As soon as I had seen her, I was lost. For Beauty’s wound is sharper than any weapon’s, and it runs through the eyes down to the soul. It is through the eye that love’s wound passes, and I now became a prey to a host of emotions.”

Still, people seldom fall in love after seeing someone for the first time.  Admittedly, we felt touched when Ariel saw Prince Eric in Disney’s The Little Mermaid and immediately began planning their wedding. Sure, the look the Prince gave Cinderella when she first entered the ball made our hearts swoon. However, looking up and instantly seeing the love of our life sounds preposterous. Appearance gives no insight on someone’s personality or nature, and people who never experience sudden infatuation seem to think they will never fall in love.

According to a poll of 70 students conducted at NC, 51.4% did not believe in love at first sight.

“I don’t necessarily believe you can fall in love with someone as soon as you see them, but I do believe you could have an instant connection,” sophomore Emilee Robertson said.

The remaining 48.6% believe after viewing or experiencing it firsthand.

“I fell in love with my best friend almost instantly. She was my first love, and I even flew to Texas to take her to prom this year,” senior Gerald Mitchell said.

While the majority of romantic movies play on the idea of love at first sight, soulmates also crop up in plot lines.

Slumdog Millionaire tells the story of a young man from the slums of India who makes it onto the show “Who Wants to Be a Millionaire,” and, nearing the 20 million rupee prize, gets arrested on suspicion of cheating. He goes on to explain how various events in his life gave him the answers for the questions on the show, and the story largely centers around childhood love. Despite drug lords and pimps tearing them apart for years, the two beat the odds and end up back together, finishing off the movie with a wonderful dance number. 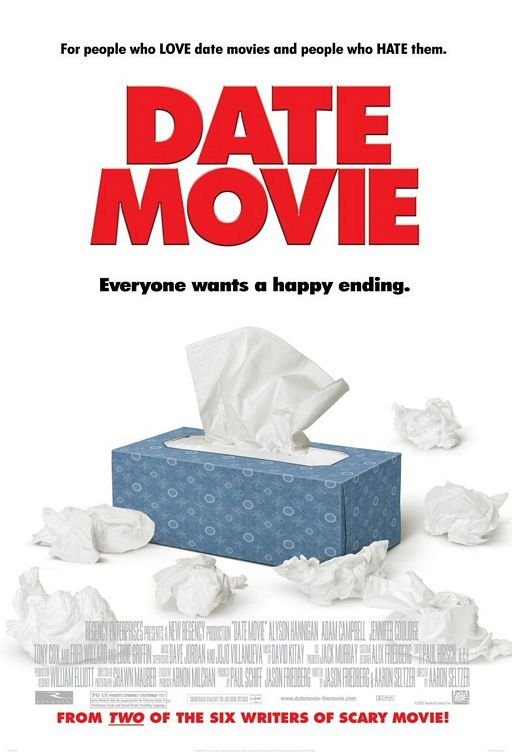 Ridiculous, right? The idea of soul mates makes people feel the need to end their relationships because they do not mimic The Notebook.

Spike W.S. Lee, professor at the University of Toronto, conducted a study on soulmates in which he gave two groups a quiz on commonly heard phrases.

“One group was given several phrases that alluded to the idea of soul mates: ‘we are one,’ ‘my better half,’ ‘made for each other,’” New York Magazine, who used Lee’s research in an article about soulmates, said.  “The other saw phrases that brought to mind a journey: ‘we’ve walked together,’ ‘a long trail,’ ‘look how far we’ve come.’ After that, the volunteers were told to write down either two memories of good times, or two memories of bad times, that they’d shared with their partner. Finally, they rated how satisfied they were with their relationships.” 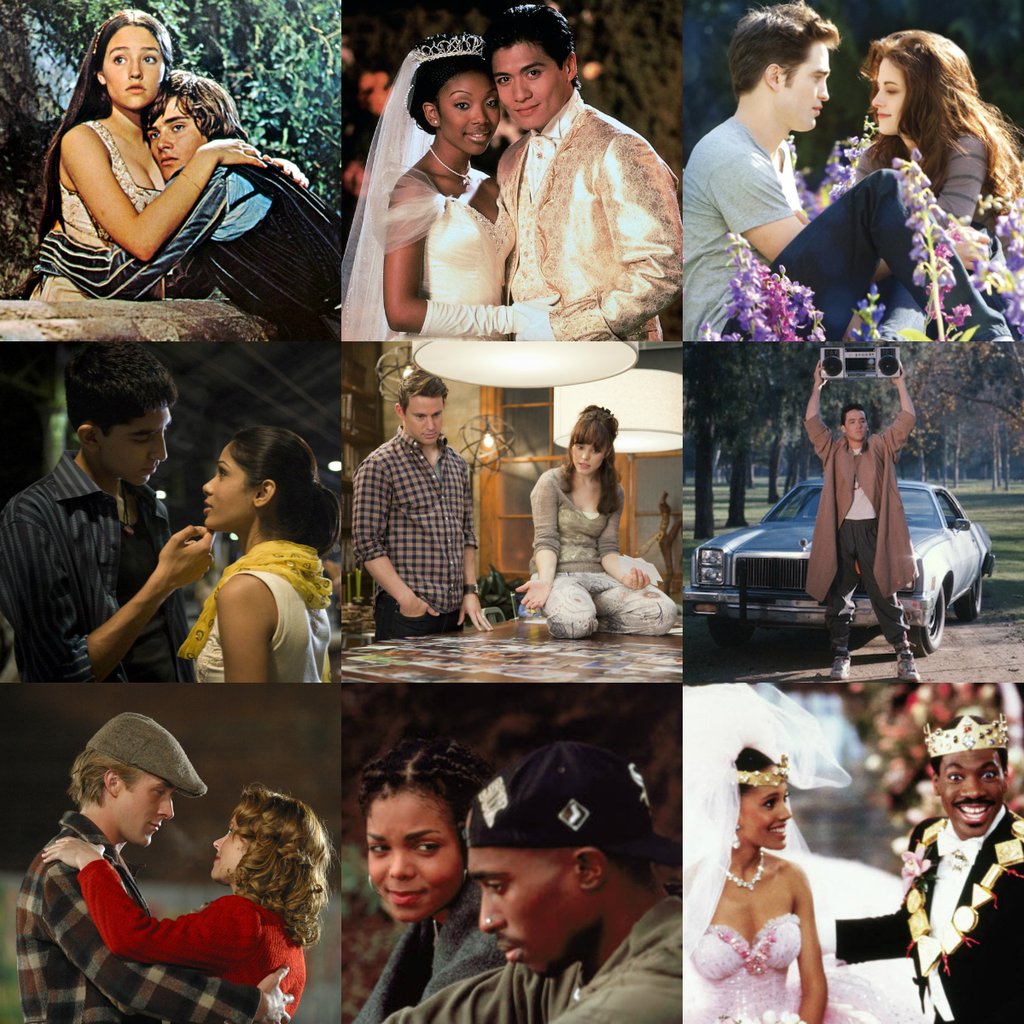 Disagreements amongst partners may build the bond, but people may give up after a tiny argument. Conditioning people for a perfect whimsical relationship causes them to feel disappointed with their own normal relationships.

“My idea of a perfect relationship would include romantic dates and spontaneous presents from a guy who is good-looking and successful,” junior Taylor Toney said. “I just want to be spoiled.”

Toney, like most people, fantasizes about a relationship based on gifts, looks, and other shallow facets that barely scratch the surface of what a true relationship entails.

“A real relationship is one where you take out the garbage, pay the bills and talk about your kids,” clinical psychologist and CEO of Foursight Game Systems Reid Daitzman Ph.D. said. “A lot of it is really boring. What people don’t realize, though, is that the best day of their lives includes all that boring stuff. Because when people don’t have it, they really miss it. A guy who just had an affair really misses his wife and would love to be back with her talking about trivial things.”

Romance movies fail to show the boring side of relationships; just because one’s partner does not make a candlelit dinner and play songs that they’ve written on their grand piano does not mean they do not love them. When an argument ensues, do not expect a significant other to chase their love down the street in the pouring rain to profess their love because relationships do not work that way.

Basing your relationship expectations on fiction will only lead to disappointment. For example, most romantic comedies use the “boy-chase-girl” storyline, in which a boy relentlessly pursues his dream girl, maybe for years, and will not take no for an answer. In the end, the girl dumps her jerk boyfriend and falls in love with the boy that loved her all along. In the real world, any sane person would call that stalking and harassment.

“If a girl who I’ve already rejected kept asking me out and begging me to give her a chance, I’d think she was a stalker,” junior Quannie Green said.

Films romanticize the transition from unrequited love to unhealthy obsession, and it prevents people who get harassed from expressing how uncomfortable they truly feel. Nobody should “feel flattered” while receiving unwanted advances. Normalizing harassment in romance movies does nothing to help the growing problem of people killing those who reject them.

“It’s not cute, funny, or cool,” said sophomore Triniti Gibbs. “Having someone continue to ask you out even after you’ve already said no is creepy and scary.”