Varsity football takes their first L of the season 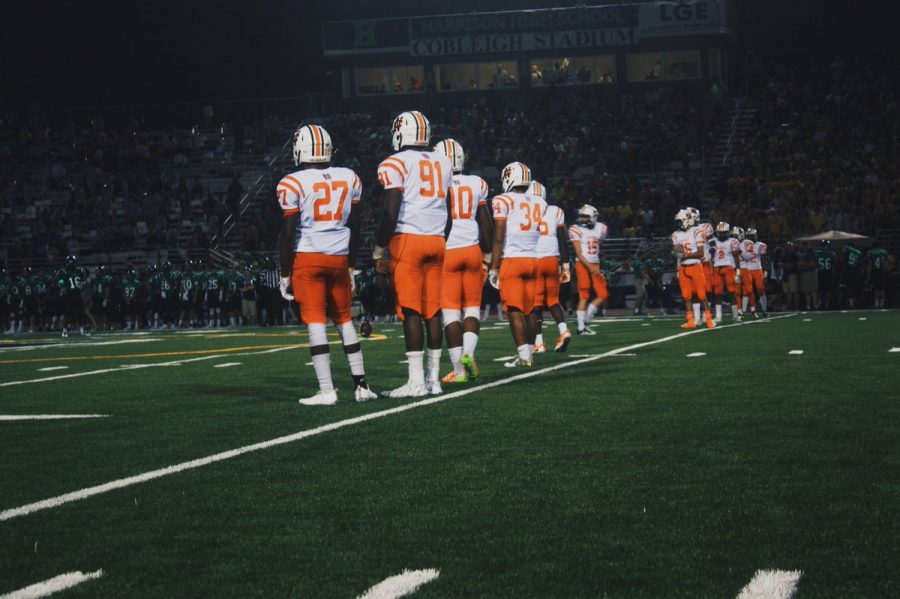 The varsity Warrior football team visited Harrison High School for the second year in a row on Friday, September 2. The Hoyas avenged last season’s loss, winning with a final score of 25-13. Once again, both teams fought a tough, physical game through the final whistle.

The game started with the Warrior defense forcing a quick three and out, allowing the NC offense to march the ball down to the Harrison eleven yard line. The drive faltered when Center Nick Price tried to snap the ball to an unsuspecting Will Lovett, and the ball rolled three yards back before Lovett dove on top of it. The Warriors attempted to throw the ball for a for a first down on fourth and four, but a Harrison blitz rushed Lovett, and he tossed a high pass with a linebacker in his back.

The Hoyas responded with a long drive of their own, but turned the ball over after senior safety Drew Tejchman intercepted a tipped pass. The Warriors failed to generate any kind of offense on their next drive, ending it with a punt. The first quarter ended with the score tied 0-0. Harrison opened the scoring with a 22-yard touchdown pass from junior quarterback Justin Fields. The referees called two offsides penalties on the point after attempt, so the Hoyas took advantage of the free yards and picked up the two point conversion.

Warriors quarterback Will Lovett led a fantastic drive to match the score, which he capped with a diving 12 yard rushing touchdown. The Warriors attempted to match the two point conversion, but receiver Hunter Parrish failed to sit down in a hole in the defense and Lovett threw the ball incomplete behind him. The Hoyas and the Warriors scored matching touchdowns, leaving the Warriors down 15-13 entering halftime. Both teams traded punts before Harrison expanded its lead with a field goal.

The Warriors appeared flustered as the fourth quarter continued, acting distracted and discouraged on the sideline, knocking over chairs and hanging heads under towels. The Warriors had two chances to try and score in the remaining five minutes of the game, but failed to advance the ball past midfield both times, and Harrison ended the game with a kneel.