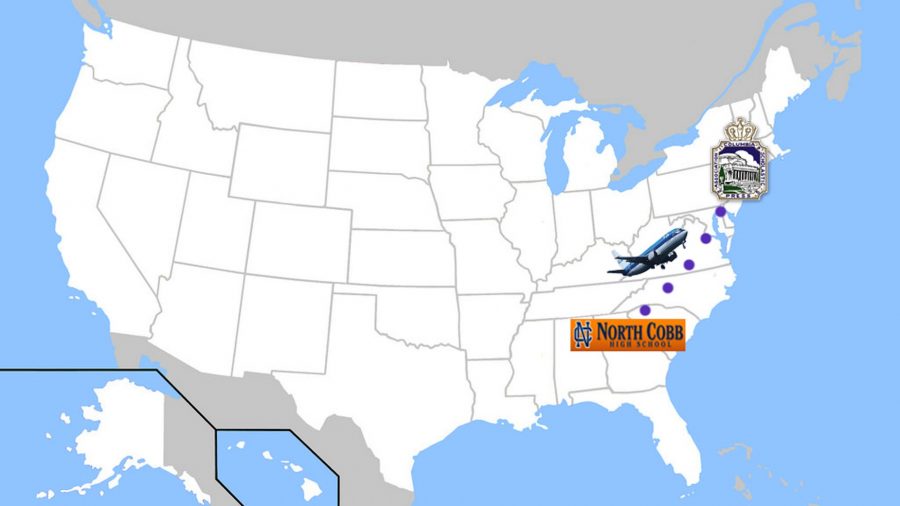 Every year in New York City, Columbia University hosts the Columbia Scholastic Press Association (CSPA) Spring Scholastic Convention. From March 15-17, high school students and advisers gather together to bond over their love for all things press, from photojournalism to broadcast news to newspaper production. This year, North Cobb’s Yearbook staff hopes to attend the conference and raise $38,000 for all members to attend and enrich the group’s experience.

“I think it’d be cool to see what yearbook is like outside of North Cobb’s Yearbook, and going to New York would be really cool,” staff member and sophomore Carleigh Futral said.

In addition, the staff received many Gold Circle Awards in their category throughout the past few years, contributing to their excitement for hopefully attending this year.

NC’s yearbook staff hopes to raise enough money to fund attendance for all members at 2017’s conference. Last year, CSPA asked the staff  to speak at the conference, but invited them in November, leaving too little time to raise sufficient funds for participation.

“It was definitely heartbreaking [not getting to go to the conference]. We work really hard and to know that other schools have booster clubs to pay for it and we don’t is just really unfair,” co-editor-in-chief and senior Erin Belmar said.

Adviser Jan Husband supervises the class. As a long time NC faculty member, she has assisted in the production of the school’s yearbook for ten years and continues to display enthusiasm while discussing her class.

“I love it, I love yearbook! I think it changes so many people’s opinions and life and how they view journalism,” Husband said.

Each year, the staff sells around 900 yearbooks and the profit goes toward basic essentials like camera equipment, leaving minimal funds left for events. Each ticket for the conference runs around $109 and the entire cost of the trip totals to about $2000 per person: way over the staff’s budget.

Still, the staff hopes to raise around $38,000 to ensure the participation of all 19 members. They do not shy away from the cost of the event and instead rise up to the challenge to raise their goal amount and more to fund both the trip and new desktops and equipment to further enhance the quality of the book.

Their fundraising efforts will take place from now until December. Running until Wednesday, the yearbook staff will market Honeybaked Ham in time for the holiday season. They will also sell 1800-thread-count bed sheets from now until November 4, and from November 18 to December 2.

Although targeted towards faculty, the team works on planning activities and fundraisers students can participate in as well. Students and faculty alike can help the Yearbook staff raise money by keeping their eyes peeled for fundraisers, buying products, and participating in the services offered by the staff.