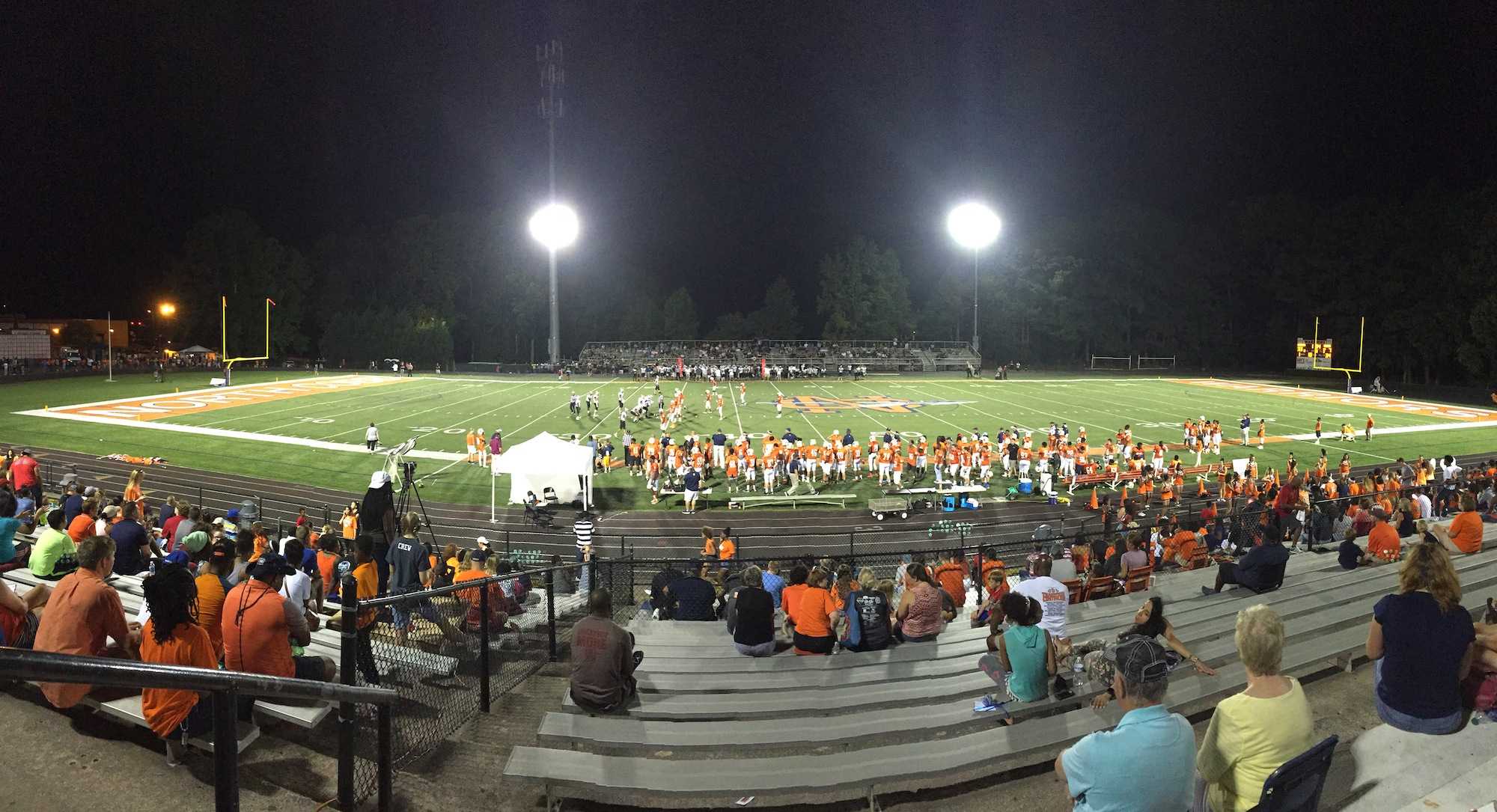 On fall Friday nights, the football team suits up to play, the cheerleaders scream and shout, and the band blasts tunes. While these traditions constitute the base of high school football games, people often overlook what quietly happens in the press box before, throughout, and after the game.

Audio film and technology teacher Joshua Dempsey established a group to allow students to film, broadcast, and commentate on the football games at NC’s Emory Sewell Stadium. With a cast of ambitious students, they gather for each Friday night home game to set up all their equipment to prepare a broadcast for fans not able to attend the game, or for those who like to go back to watch it again.

“One of the best things I did when I was in college was being involved in my school sports broadcast,” Dempsey said. “I don’t want to make ya’ll wait until you get to college. I want to go ahead and give you the opportunity here so that when you get to college. You’re already a leader. I have a lot of kids I’ve had that go to college and come back telling me that they’re over prepared.”

The process begins right after school and sometimes even during school. It starts with the moving of all the equipment from Dempsey’s room to the pressbox. The equipment includes five cameras (including a GoPro), a television, headsets, walkie talkies, a table, a sound board, and the all important tricaster. Without the tricaster, there can not be a live broadcast, and it just so happens to weigh the most, requiring at least three people to assist in moving it to the press box.

After transportation, the setup begins, which requires lots of knowledge and expertise in the field of audio film and technology. Cables connect two of the cameras to the press box, one placed on the left side of the bleachers and one on the right. They attach a third camera to a tripod placed on the window of the press box and the fourth acts as the on field camera without a tripod, which someone moves freely along the sidelines.

The setup part of the process takes the longest, but testing the equipment requires the most mindfulness.  To start, the camera holders check the camera batteries one last time and make sure the picture looks presentable. Then, the play-by-play and color commentator test the audio for the headsets, making sure they can hear each other at the right volume. Also, the technical director makes sure he or she can transfer from camera to camera smoothly, communicate efficiently with all members, and work out any simple problems going on with the broadcast. Lastly, with the tricaster present, Dempsey checks the website for the live stream, making sure it looks clear and fast.

Once 7:25 hits, the magic begins. Most games start with a quick pre-game and “tips to the game” from the broadcasters, then immediately fly into kickoff, with commentary and visuals of the football game. With the addition of replays, halftime interviews, and even sideline games, the broadcast goes smoothly, whether live or not. After the game, everyone involved helps untangle everything put together for the game, putting it back into Dempsey’s room. 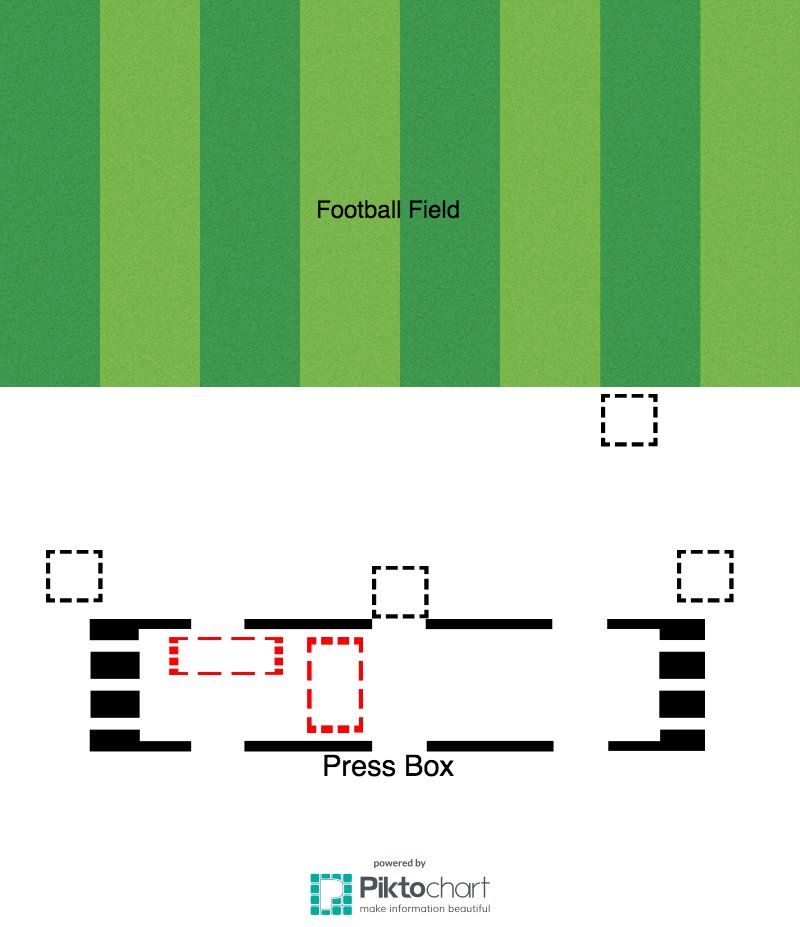 With the amazing talent the broadcasts bring out of the group, the aspirations to get better lies within each student, which requires new technology.

“I want a drone to live stream from, that would be amazing. I actually have seen that from a school in Tennessee, so if we could get in contact with them that would be awesome,” Dempsey said. “I would love to have more cameras in the end zones that we could use. I hate to say this, but I’ve seen some of our stuff and some of the Kennesaw State stuff, and if we went over there and use what they have, we would make them look bad.”

Like Dempsey said, the students at NC put so much effort and time to make sure these broadcasts look the best they can. One of those students, junior Jules Shelly, has one of the biggest impacts on the games.

“It’s my job to make sure everything is set up and to get everything working. During the actual game it’s my job to use shots to focus on certain points of the game and direct in a way, telling [cameramen] when they’re live,” Shelly said.

Instead of participating in the student section or going out with friends on a Friday night, Shelly spends her time “making the magic happen.” Instead of looking at it as a job, she makes it fun.

“I really love doing it, it’s just really fun to get everybody together to do what they love and you feel this sense of accomplishment. It’s really nice to go home at midnight on Fridays and feel like I’ve done something with my night. I just love doing the whole broadcast aspects of things,” Shelly said.

While it serves as a productive after school activity to put on her resumé, Shelly participates to figure out her future.

“I knew I wanted to go into film, but I wasn’t really sure whether broadcasting or not. After this I’m definitely leaning towards broadcasts and it opened up a new opportunity for me,” Shelly said.

Still just a junior, Shelly still has time to work more with broadcasts to become an expert in the field. The high school barrier excuse to not start early fades away from reality, with the whole broadcast team proving this point.

“It’s my first semester junior year and I’m now starting to have more of a role in the video program. I feel like I could’ve done it last year and I would’ve had more opportunities,” Shelly said. “I’d say get started early and get passionate about something like that. Follow your dreams, man.”

The new addition of the play-by-play commentary this year helped spark an interactive and fun element to the broadcasts, and without one student, it might not have even happened.

Once a football player himself, Gallman knows more about the game than an average fan, but does the broadcasts for more reasons than just his knowledge.

“I think it’s fun. Also it’s what I wanna do. I want to be a sports broadcaster and do that sort of thing with my future. I feel like getting a head start on it now is a good idea,” Gallman said.

Gallman plans to step up to play-by-play broadcaster next year with the current one planning to graduate. His message to all other high schoolers who want to pursue their dream inspires all.

“Start as early as you can and get as much experience in the area you want to pursue before you actually get to the point where you have to start making decisions,” Gallman said.

With the football season at an end, the broadcast team now focuses on how to make the seasons to come better. Certain things students look to work on now include recruiting members for next year, especially seniors, working out broadcasting away games, and investing in the best affordable technology.

So many students at NC work now towards their goals, trying to ready themselves for their future. This group certainly stands out, taking their free time away from school to put together something not many people can say they did in high school. 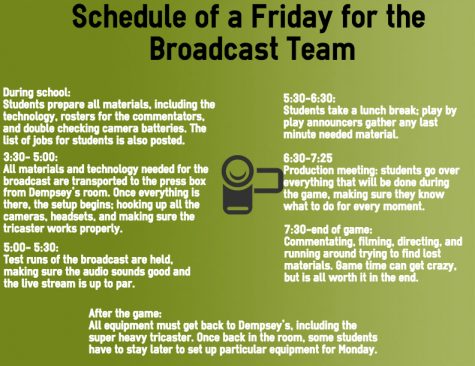