Through the eyes of an Immigrant: Integration in America 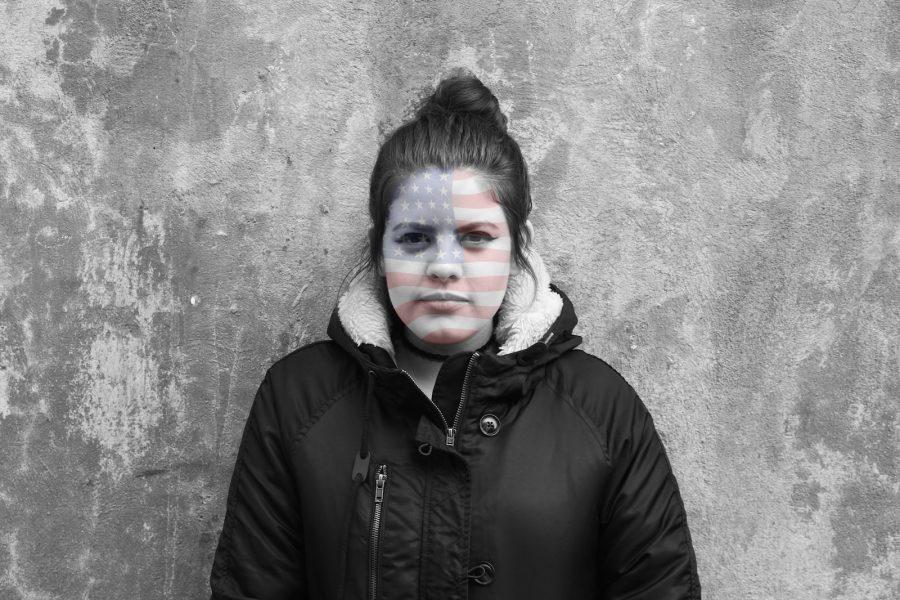 The home of the brave and the land of the free.

A melting pot of various cultures and traditions.

Men and women progressing each day.

Elbow grease and exhaustion become a friendly reminder of dreams. 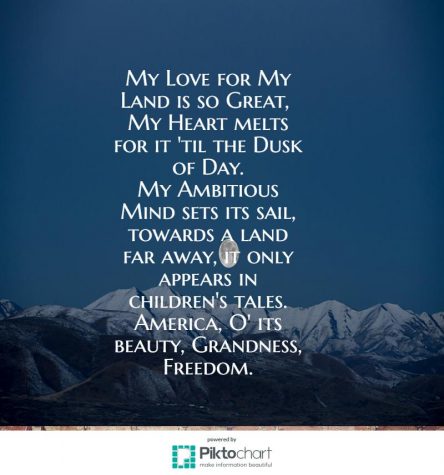 My family, along with many others who integrated and immersed themselves in America, believed in the American Dream and hoped for a far desirable future.

The Migration Policy Institute states that in 2014, immigration increased by one million, or a 2.5 percent. In the same year, immigrants reached a staggering 81 million people living in the United states and the numbers expect to rise.

Immigrants struggle with language, culture, and at times, racist comments when trying to integrate into America. Through all of these hardships, resources become available for immigrants and make the transition into a new country far smoother.

My father worked in the Pepsi company, in later years receiving the title of  President of Pepsico’s Union. My mother, with a toddler in tow and a growing belly, worked in a nearby bakery near our one room house. Over the following years, my parents built the house of their dreams, constructing it into a zigzag of hallways and a grand looping staircase.

Our home lied in Pando, Uruguay, a small country with a population of three million, where neighbors knew each other and left their doors unlocked with crime unheard of in such a small town. Now it stands alone, desolated with vines wrapping around the exterior and dust and spider webs covering the looping staircase. The halls empty and desolate, with all of its belongings in a new home, starting a new beginning. My journey, similar to other immigrant stories, began with a newfound challenge and a spark of ambition.

In September of 2001, the U.S faced one of its worst terrorist attacks in history, 9/11. Although the incident occurred thousands of miles away, globalization lead to the effects reaching countries across the world.

Effects that changed immigration policies in the United States, and that made the journey for many immigrants far more difficult. According to the American Bar Association, America tightened its grip on who they allowed to receive a Visa to travel to the states. The Enhanced Border Security and Visa Reform Act  limited and controlled who entered the country in an attempt to prevent future terrorist attacks.

“I was working when I heard about the attacks in America. Me and my coworkers heard over the radio of it and the first thing I thought about was ‘They’re going into war.’ I was stunned with fear, because I knew our country, like others would feel its effects. I was scared for my children,” Ricardo Sagaseta said.

The world in whole felt the effects of inflation and the rise in unemployment rates due to the attack. My family did not escape its grasp and at the age of three, my parents decided instead to turn their backs on the country that raised them and with sorrow buried deep in their hearts, they commenced their journey to America along with thousands of other immigrants.

“My parents came to America to offer me and my brother a better life. To help improve their own even though they knew it wouldn’t be easy” Senior Kenya Vargas said.

Vargas’s parents, like other immigrants, believed that America can bring their family a higher quality of life. Her story, along with mine, and the 81 million other stories that remain untold, hold a unique struggle. A struggle shared between people with different backgrounds and ethnicities, but that all share the same label: Immigrant.

Luckily, America signified new possibilities. Freedom of speech, the will for one to create their own path, and the capacity for wealth. The idealism of a country with these factors pulled many immigrants onto a plane and to a grander future.

To the dismay of most immigrants, the fairy-tale American dream proved nonexistent. The country not rising up to their expectations, whether it pertains to the way the citizens act, or their surroundings, make some travelers regret their decisions.

At the age of four, I glimpsed at racial injustice for the first time. I tried not to “judge a book by it’s cover.” Although America’s cover portrayed itself with bold letters, beautiful colors, and a perfect image, its pages told a different story. The pages, crinkled, dog-eared, and spotted with coffee stains, reveal the everlasting flaws of America.

“Personally, I have never had racist comments made towards me, to my family yes. People, however expect my English to be less educated and mannered because I’m Mexican” Vargas said.

The barrier between languages discouraged and blocked any type of communication between me and the world. Now, at the age of seventeen, I remember my pre-kindergarten teacher’s cruel words. The ignorance she spat out on why I stayed mute, how I should return to my country of origin, and how my worth equaled zero. My brother, then in fourth grade, received the same treatment from his teacher; at times, he came home with dried tears on his cheeks.

“I noticed what was happening at the school because Melissa would act different. She would cry and scream every time we took her to school. It wasn’t like her, she had gone to pre-k in Uruguay and never acted that way,” my mother Nair Sagaseta said. “I called the school and no one could translate for me. The cook, who spoke Spanish, told me they wouldn’t let her go to the bathroom or drink water because they didn’t understand her. I got her out of there right then and there.”

The year that I entered elementary school, I began to see a grander side of America. Up until that point, I detached myself from experiencing any type of joy. I wanted to leave, to escape, to go back to the place where I belonged.

In fact, I am not the only one who felt the emotional turmoil of moving to a new country. Princeton’s Adaptation Of Immigrant Children To The United States states that immigrant children face challenges of adjusting to new social reforms and unknown environments. Fortunate for many immigrant children, ESOL(English to Speakers of Other Languages) paved the way to a trouble free transition.

I began ESOL in first grade, and after a rigorous year of learning English vowels and simple words like “cat” and “dog,” I felt that I fit in. I made friends and communicated with my teachers, and most importantly, I did not feel different.

“I felt the same way when I finally knew English. It definitely made me fit in with the kids more since a language barrier is something huge that could stop a child from making friends” Vargas said.

According to Migration Policy Institute(MPI), 94 percent of Americans believe that the ability to speak English plays a crucial role in whether that person should be considered an American. The moment I spoke fluent English, I did not feel alienated from the rest. Children wanted to talk with me and teachers viewed me like the rest of my classmates.

“Having my first language not be English made it more difficult to grow up in America. Simple things such as getting jobs for my parents was difficult at first.” Vargas said.

The year I entered NC, I incorporated myself in clubs that represented my culture, but that still showed my ambition to strive in America. HoPe, hispanic organization promoting education, became a place where the school’s hispanic community could come together and work to better themselves in school and their future. 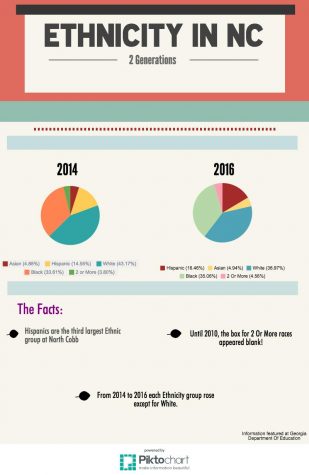 “Our school being a mixture of cultures helps add a different perspective to students on other cultures than theirs. And also it’s amazing to see the difference of how education impacts different people from various parts of the world,” Vargas said.

I felt proud and honored to carry the title of hispanic on my shirt. Each exam I took, I checked the ethnicity box with pleasure, and every question that arose of how I did not “look” hispanic, I answered with pride. The club, along with the presence of other cultures throughout NC, empowered me to accept who I am.

Vargas in the contrary, takes a different stand, “I don’t believe schools do enough for Hispanic kids and their families. There are so many more things that could be done to help them” Vargas said.

The following years flew by, my brother and I incorporated ourselves into all things American. We went to our first American football game, decorated our first Christmas tree, and ate peanut butter and jelly sandwiches the second we arrived home.Out the front door, we surrounded ourselves in these simple pleasures, but in our house, we became a multicultural family.

According to River Point Psychiatric, children who  live in a multicultural household “…often have high self esteem and a strong sense of personal identity”.  Due in part to the parent’s positive attitude towards the new culture they inherit, and thus ensures that the child grows up embracing both cultures. Immigrant families fully embrace the American culture, while keeping close ties to their own traditions.

“My parents try to limit how much goes on. We are not allowed to speak english at home, because my parents don’t want us to forget the language. Growing up has always been more on the mexican side of things, and I don’t really mind it” Vargas said.

Unlike Varga’s parents, mine fully incorporated both cultures. My parents drank Mate, a traditional drink most Uruguayans enjoy, while me and my brother preferred coffee. My mother incorporated lunch meats and American cheddar cheese into empanadas. My father read El Pais, an online Uruguayan news source, while watching Fox 5 News on tv. We barbecued on the Fourth of July while dancing to Cumbia in the kitchen. While my family incorporated and intermixed both cultures, certain traditions slowly drifted out of our lives.

We ceased celebrating the yearly February Carnaval, an event for which we used to travel to on my birthday. The dancers and the craze of the multitude of people amazed me at the time. Now, February comes and goes and I do not think twice on it.