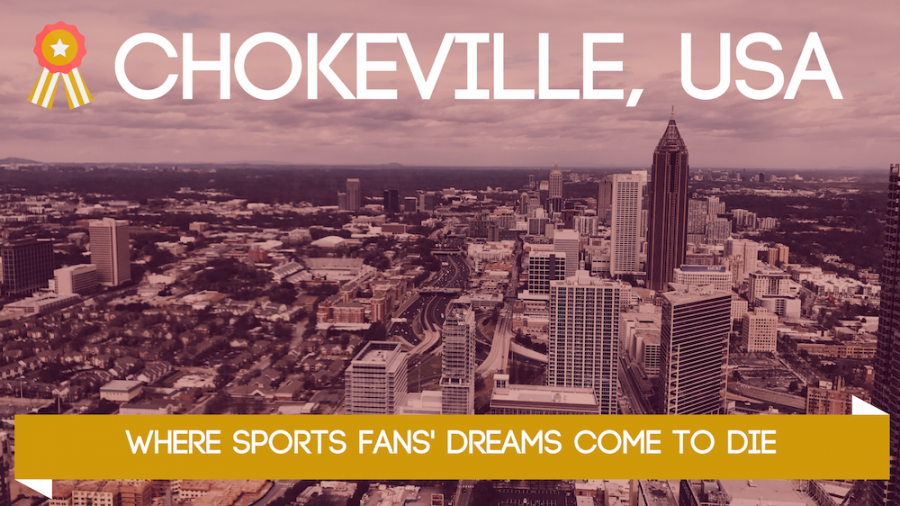 Last June, ESPN debuted a 30 for 30 documentary called BelieveLand. The hour and a half documentary chronicled Cleveland sports fans’ misery over the past 100 years. A mere two months later, Lebron James and the Cavaliers overcame a 3-1 finals deficit to win the city’s first major sports championship in over fifty years. Now, a new city needs to bear the title “Worst Sports City”: Atlanta, Georgia.

The Super Bowl this year presented why Atlanta fans should never get their hopes up in prime time. Before Super Bowl LI, no team ever endured the misery of blowing a 19 point lead in any playoff game ever. Teams combined for a 93-0 record in playoff games in which they led by 19 or more points. No team ever overcame even a 10 point deficit in the Super Bowl. The Atlanta Falcons led by 25 early in the second half, until they lost it.

For the first time ever, a Super Bowl went to overtime. The Patriots received the ball and put together a drive that resembled Sherman’s March to the Sea: quick, methodical, and destructive to Atlanta. In Super Bowl LI, Brady’s overtime drive to the end zone led to another soul crushing loss for the city, cementing Tom Brady as arguably the greatest quarterback of all time. The Falcons watched Brady’s final coronation from on the field, leading to another super sized disappointment for America’s eighth largest city.

The Falcons have “attended” two Super Bowls in their 51 year history, John Elway handed down a whipping on their first trip and the other led to a never-before-seen heartbreak. Atlanta’s NBA team, the Hawks, have never made an NBA final despite playing just as long as the Falcons. The team participated in 17 playoffs since the 1990-1991 season. Of those 17 playoff attempts, only once did the team make it to the conference finals where, of all teams, the Cleveland Cavaliers swept the first seeded Hawks. In the final game of the series, the Hawks trailed Cleveland 74-38 at halftime and lost 123-98. While the city fully supported them, the team appeared to simply give up. Getting swept by what people called the “most depressing sports city in America” in the city’s first NBA Eastern Conference Final automatically declares Atlanta the new king of sports misery.

The Atlanta Braves possess the only Major League Sports championship in Atlanta. Their win in 1995 ensures the city does not own the record for longest time without a championship. However, the team started a streak in 1991-winning the division 14 straight times, an MLB record, and playing in seven World Series while finding ways to lose 13 out of 14 October tries brings one word to mind: pathetic.

According to The New York Times, the average city makes three semifinal appearances to every championship win. Can you guess Atlanta’s ratio? After that embarrassment of a Super Bowl appearance, it ranks at a humiliating 15 to 1.

The bad spells occur outside of Atlanta as well. The University of Georgia won its last NCAA football championship in 1980 despite consistent top ten recruiting classes and top 25 finishes at the end of the season. In 2008, the Bulldogs entered the season with All-American running back Knowshon Moreno, future Detroit Lions and number one overall draft pick QB Matthew Stafford,  future Pro-Bowl receiver A.J. Green and at least ten future NFL players, including right tackle Clint Boling, wide receiver Mohamed Massaquoi, linebacker Dannell Ellerbe, cornerback Asher Allen, and Pro Bowl Tackle Geno Atkins and running back Rashad Jennings. The star power the Dawgs possessed catapulted them to the pre-season #1 team in the AP and coaches poll.

However, they proceeded to lose to Alabama, get smacked 41-10 by Florida, and blew the regular season finale by losing to Georgia Tech at home, finishing the season 10-3 without a chance to play for a championship. In 2012, the Bulldogs played in the SEC Championship Game; a win would surely place the team in the BCS National Championship game. Georgia started their last drive on their own fifteen yard line down by four.

After an impressive drive, Aaron Murray snapped the ball on the 8 yard line with nine seconds left. He threw it towards the end zone and the Tide tipped the ball in the air. Georgia Receiver  Chris Conley instinctively caught it and fell down on the five yard line. Unfortunately, with the clock still running the Bulldogs ran out of luck, and out of time to get another play off.

The game and the championship run ended on the five yard line. The University of Georgia currently boasts the second longest bowl eligibility streak behind the Virginia Tech Hokies, but the Dawgs do not boast a National Championship game appearance since 1981.

The worst part of cheering for Georgia sports teams does not stop at the lack of championships. It extends deep into the fans’ veins, inside their hearts when once every two or three years one team goes on a run, gets every fans hopes up, and then loses in the most heart-shattering ways. If a choking hazard appears, Georgia sports teams pounce on that opportunity instead of the glory. The problem lies in the fact that the city’s teams possess enough talent to make playoffs and get hopes up but not enough to finish the drill.

The teams seem to accept mediocrity. They make it to playoff games and pat themselves on the backs just for getting there. “Hot-lanta” becomes “choke-lanta” under the lights and the disappointment that follows haunts Atlanta sports fans until the next chance for them to get hyped about a team and then watch them crumble.

Atlanta deserves more than what the teams have produced on their fields or courts. The city waits until sometime in the future, when one team realizes what representing the city of Atlanta means, and what it means to wear this historic city’s name on the front of a jersey. Atlanta and Georgia possess the talent to win a championship soon, but for now, the city and the state must bear the title of “most miserable sports place.”