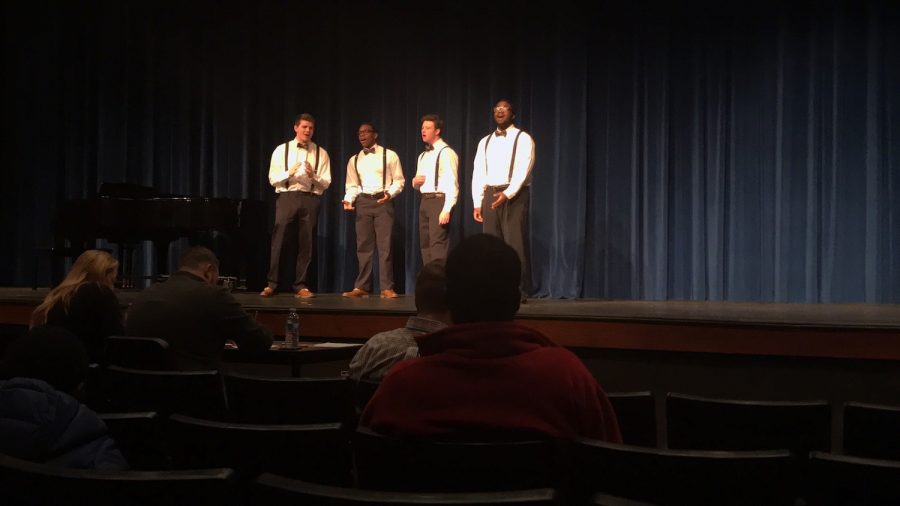 Literary Meet, run through GHSA, combines the best of singing and acting in an Olympic-style competition. Five schools attended the region meet — Hillgrove, Kennesaw Mountain, McEachern, NC, and North Paulding — and judges gave out places based on a point scale: seven points for first place, five for second, three for third, one for fourth, and none for fifth. At the end, officials tallied the points to crown a regional champion high school and runner-up.

NC’s quartet took home first place, earning the school a full seven points toward the cup. The group, consisting of seniors Perry Slaughter and Sean Lubbers and juniors Wesley Grant and Jeremiah Franklin, performed two contrasting pieces: “I Have Had Singing” arranged by Ron Jeffers and “My Girl” by The Temptations.

“I thought we did amazing. We’ve been working since August, and we even worked over the Winter break so we all worked as a unit and did amazing,” Slaughter said.

“It was really fun, and I got to meet a whole bunch of other people and see our rival schools. I came in second in both of my categories and I’m really proud of that,” Warren said.

“I think we could have placed higher, but I’m also biased. I still think we deserved second or even higher, but it was a good competition overall,” drama teacher Candice Corcoran said.