An (even more) modest proposal 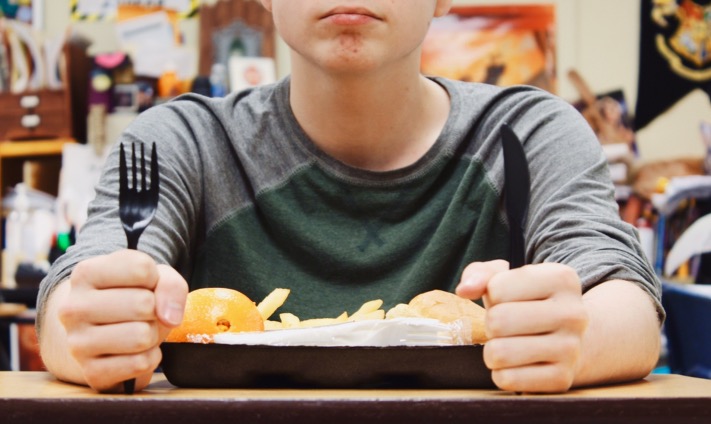 With the new lunch protocol, students must beware when eating to make sure their meal is not their friend.

Traditionally, the crowd favorite “mystery meat” contains ground up vegetables and a various assortment of turkey parts, which gives students all of the essential vitamins and minerals they need (along with eating a whole apple and carton of skim milk).

Recently, however, a new report revealed that human meat provides the same, and in some cases more (depending on the individual used), nutrients as traditional turkey at a much more cost efficient price. Superintendent Chris Ragsdale caught a whiff of this fresh, affordable recipe, and released a statement earlier this morning.

“Upon returning from the 2017 Spring Break, all turkey meat used in school (grades K-12) kitchens will be substituted for the flesh of humans in ISS, due to its cost-efficiency and nutritional value,” one line of the statement said.

While most of the school board agrees with this decision, as it means their salaries remain largely untouched, NC’s ISS population possesses a different view of the change in school diets.

“It’s crazy! I’m only in here because I was tardy from going to pick up Dunkin Donuts one too many times, and now I’m supposed to be my friend’s lunch?!” junior Mel Rainship said.

“Don’t tell the other kids this, but I’m actually kind of grateful for this because some of these kids are just too much to handle,” Jameson said.

Parents worry about their children as well.

“I don’t remember signing a permission slip for this,” parent Susan O’Brien said.

County officials reported that they assumed a situation like this would occur during the fiscal year and included the detail in the fine print of ISS forms.

Coming back to school after spring break will bring new changes, but officials ensure parents that everything will run smoothly and that the school will provide extra medical staff who will check in on mystery-meat eating students.