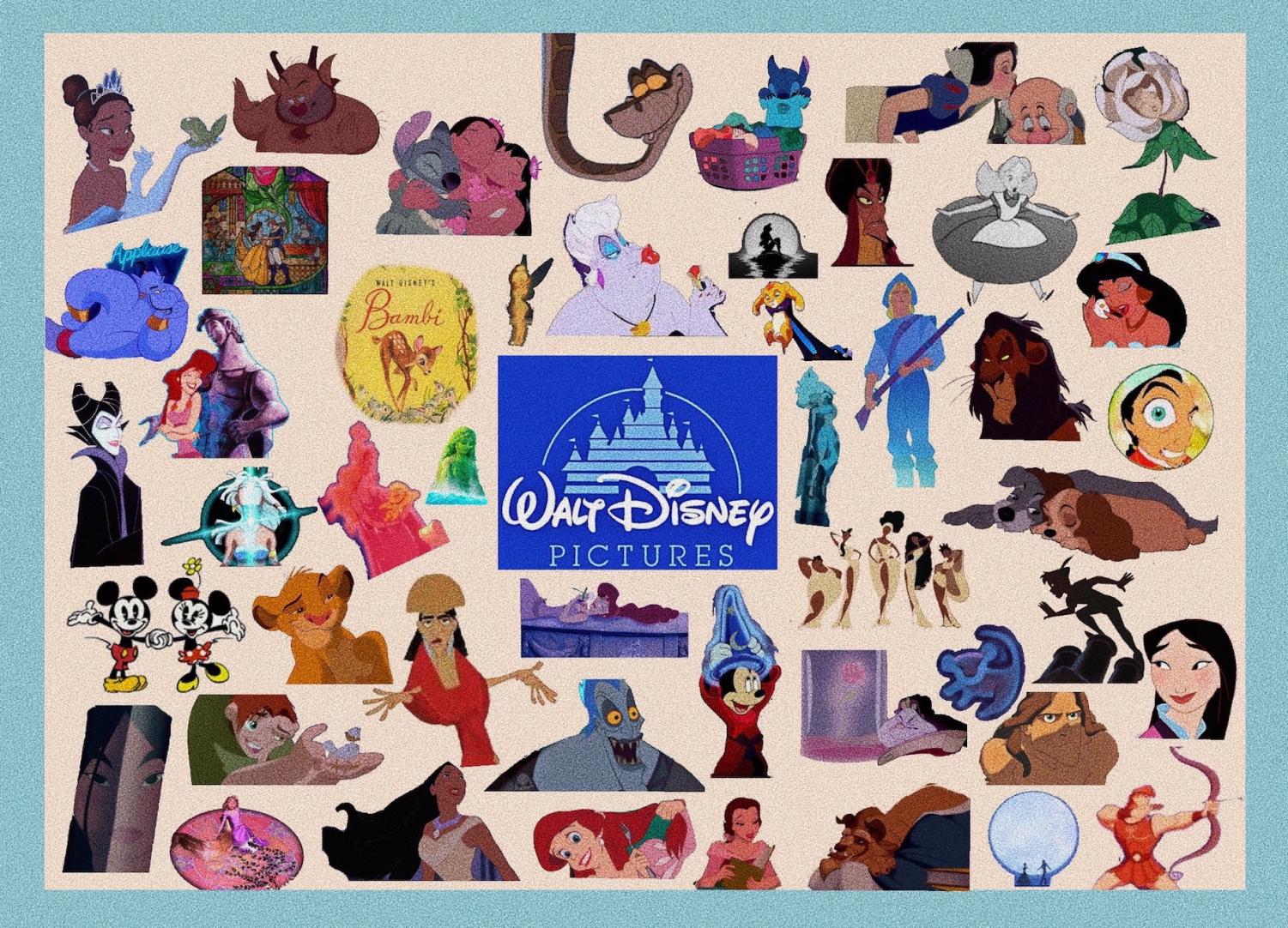 Magic mirror on the wall, does Disney influence us all?

Once upon a time, Disney movies took over the world. Through magic carpet rides and faith, trust, and pixie dust, the $110 billion company shares tales as old as time. From Cinderella to The Incredibles 2, audiences from ages four and up watch heroic adventures and learn life lessons on how to live life magically. However, a major disagreement today divides society by those who believe Disney radiates positivity and those who believe the movies emit negativity. The extent to which an animated Disney movie predicts real-life expectations and influences viewers positively or negatively causes controversial opinions to rise.

Walt Disney and his brother Roy Disney founded Walt Disney Productions in 1923. After producing Steamboat Willie and other short films, Walt Disney released his first feature film, naming it Snow White and the Seven Dwarfs in 1937. This movie marked the beginning of the animated Disney movies and of the classic “man saves woman” love story plot.

From a psychological point of view, Disney movies imprint a critical amount of life expectations at a young age. Children, especially those whose parents leave them movies to watch to occupy time, learn lessons from Disney characters, not their parents. Watching Disney movies is a fundamental element of an American childhood, therefore the underlying messages in these movies significantly influence the mind of a young child or young adult.

Those who lack a strong belief system will depend on the help of others to build self-esteem. For example, someone lacking a sense self-purpose will watch the 1998 film Mulan and believe that the most honorable goal to achieve means seeking individuality and controlling destiny and fate. However, someone feeling lonely and in need of a partner could watch the 1989 film The Little Mermaid and realize that changing one’s complete identity for love means a happy life. Animated Disney movies consist of different ways to see their theme or life lesson, and viewers can see it as either negative or positive.

Approximately 148 animated Disney movies exist and of those, most illustrate positive aspects. A Disney movie brings optimism and joy into one’s life, along with the power to impact its audience. The consistency of happy endings allows people to know that while enduring tribulations, the sun will always shine after the storm. 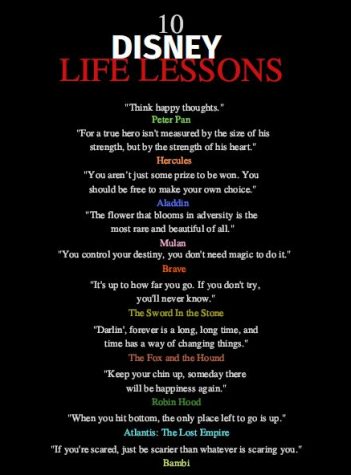 “I definitely believe Disney’s movies are both negative and positive, but mainly positive. When I was growing up I didn’t have many friends, and I would go home and watch a Disney movie and see how these main characters didn’t really have friends either. It taught me how to make friends and that it was okay to be yourself and not somebody else.  All of these movies show [characters] that are very motivated to get what they want [evil or good]. They are passionate and headstrong and follow what they believe is best for themselves. It has shown me that I need to live my life for myself and nobody else,” Ruhl said.

“Disney has impacted me by giving me the chance to feel like I can accomplish anything. I would definitely say that Disney has a positive impact by giving children role models to look up to and giving them the idea that if they put their minds to it, they can accomplish anything. Growing up, this definitely helped me more than I thought, because most of what I believe in now I learned from Disney,” Vickery said.

Disney does not just appeal to females, it takes an important role onto males and their lives as well.

“I like Disney because of the creativeness and it’s originality. It has affected me for better because some movies teach you lessons and it made my childhood a lot more entertaining. I do recommend it for others so they can enjoy it as much as I did as a kid and still do. They put a good message onto its audience,” senior Brandon Ponder said.

It seems difficult to question if the animated Disney movies actually present negative messages to its audience, that a company so full of pure love and kindness, could promote cynical and unrealistic stories.

The view of eighth-grader Autumn Maxwell explains Disney’s negativity. She believes Disney influences negative and unrealistic morals onto its audience. In the mind of someone who grew up on Nickelodeon shows and films, Disney tries harder to cover up the reality of dark times and struggles.

“At Disney, I feel like all of the girls (princesses especially) have to have some sort of man in their life, while at Nickelodeon, I feel like [the characters] can be independent and still happy. I think Disney doesn’t show that its okay to not have a person beside yourself at all times. In almost all of the Disney movies I have seen [that includes] princesses or girls, they always end up having a prince, when in reality that doesn’t always happen,” Maxwell said.

From the perspective of an eighth-grader to a senior’s, identifying the importance of Disney’s positive or negative influence varies. When asked about the influences of Disney films, others voiced their opinions on the issue to see if Disney’s animated movies come off as helpful or useless. 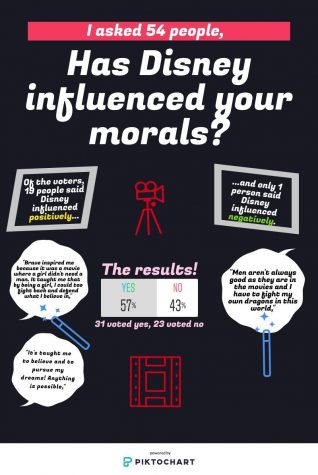 Furthermore, what happens when a young girl sees a thin and beautiful princess find happiness and love within a two hour movie? How could a young boy learn through the movies that he must live up to saving everyone but himself?

The role of the “damsel in distress” generates a stereotype to young female viewers  who may then believe their opportunities in life vary but that ultimately a man or hero will save the day. A girl who lacks  high self-esteem identifies more with Disney princesses because she might wish to follow them as role models to seek beauty.

The “hero” characterizes typically as the male role, but, recently with the release of Frozen and Moana, audiences learn that finally, a female takes the leading role and finds her purpose on her own. With this, specific movie plots from Disney importantly influence its meaning for positivity or negativity.

Moana, released in 2016, taught audiences to stay in touch with their true passion and dream, as the main character Moana sets sail on the rough seas to help her island as it slowly dies, and set a lasting mark for generations to come. However, it could also teach that traditional family rules seem useless.

In the 1997 film Hercules, the main character, Hercules, loses everything he fought for in the entire movie just to stay with the woman he loves. This could teach viewers that the heart acts as our greatest strength, or that nothing one does matters, including a heroic journey to find identity, if love exists.

Another significant use of Disney’s influence flows through the movie’s music. Catchy and uplifting tunes that stick never fail in telling the audience about a heroic endeavor, extraordinary love, or out-of-reach dreams.  When people heard “A Dream is a Wish Your Heart Makes,” from Cinderella, it told the audience that dreams originate from what the heart truly wants and that nothing should ruin or sabotage that. The powerful music in Disney movies gives the viewers a chance to relate and sing along.

However, the songs sung by villains could play a role in inserting negative messages to the audience. The evil song “Heaven’s Light/Hellfire” from The Hunchback of Notre Dame creepily shows insight into the movie’s villain Claude Frollo’s mind. The song displays such wild and dark diction that the audience shrieks with fear and discomfort. Therefore, Disney’s music shows the wonders and horrors of a movie, and this affects how a viewer might interpret the message of the movie. 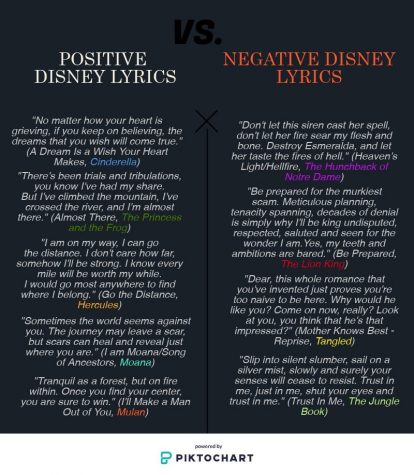 Today, most of the Disney movies fight the traditional role and standards and create more original and impressive movies. This satisfies the idea of change in their stereotypes and ideals in the movies and will greatly impact future viewers.

The audience can analyze the plots and scenes in different ways, as both negative and positive influences come from the animated Disney movies. From personal public opinion to general facts of the movies, evidence can assist people into believing that animated Disney movies seem more positively influencing. With Disney, dreams do come true and through their animated movies, the world watches as their positive impact and power sets better standards for generations to come.

One Response to “Magic mirror on the wall, does Disney influence us all?”