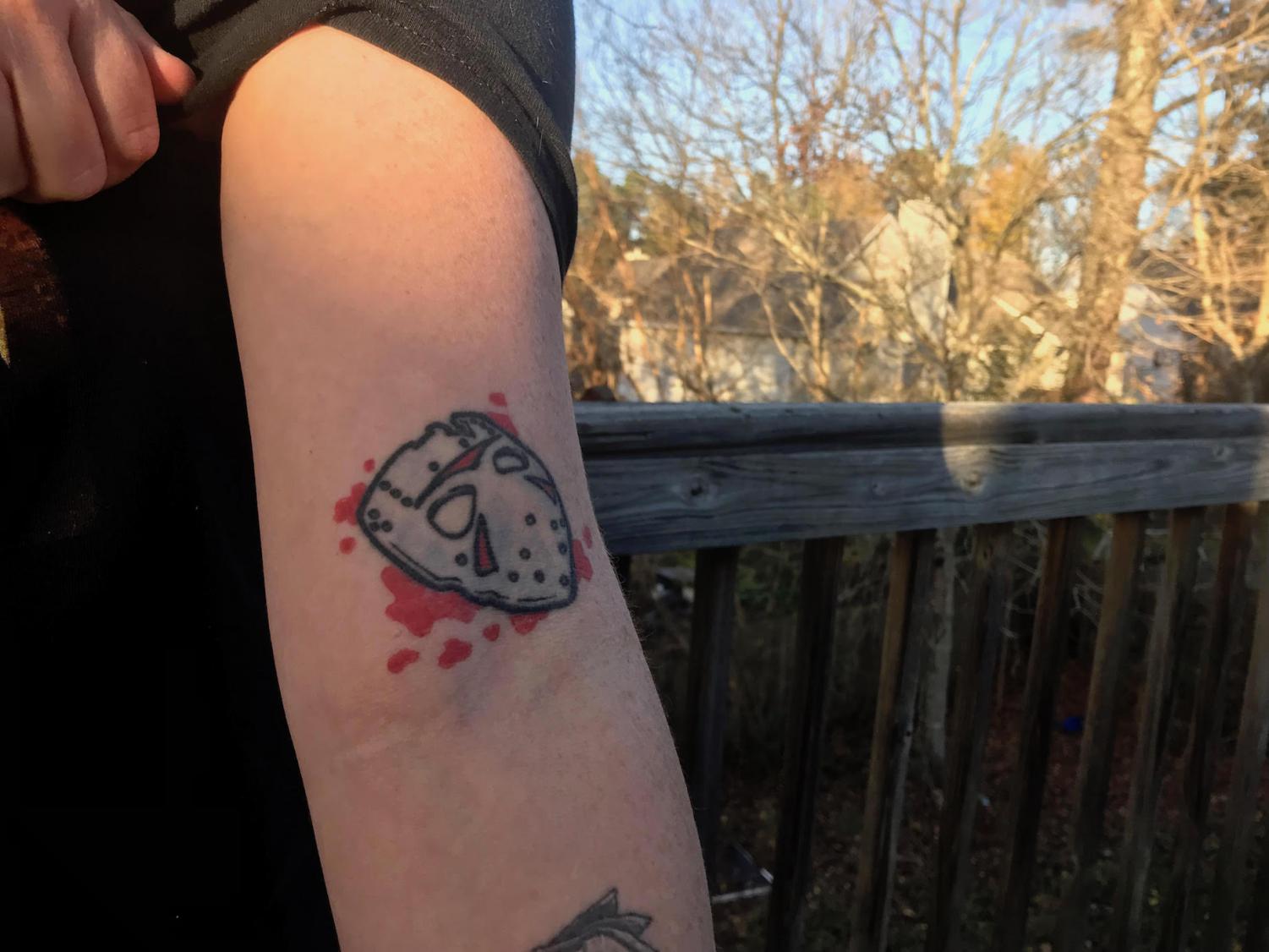 Over the past decade, tattoos have become a common milestone in a young adult’s life. Much to parental dismay, a child’s 18th birthday sometimes leads to permanently inking their skin. With today’s major influencers covered from head to toe, unlike 20 years ago, the idea of someone not sporting a tattoo seems weirder than someone sporting one.

However, this could cause a potential problem later in life for some professions, including teaching.

Influencers and entrepreneurs who make or create their own business, also make their own rules. But more commonly, an average person works in a career setting where he does not create his own rules. Businesses require employees to withstand a certain professional look— clean, nicely dressed, and approachable. People with tattoos can still hold these traits, but the stigma around tattoos causes a major setback for them. Covering tattoos with clothing during a job interview happens quite often, and although this works in the moment, the person must continue to hide tattoos with long sleeves, even during the summer months in order to keep the job.

Teachers set a perfect example of the ideal professional look, but today tattooed teachers appear more than most think.  Although teachers typically have easily hidden tattoos in areas like ankles, backs, shoulders, and sides, other teachers step out of the comfort zone and get inked in visible spaces, like arms.

“I would hire somebody with a tattoo depending on the tattoo. I think tattoos are becoming more commonplace and socially acceptable. Obviously, there are some that are inappropriate still, but we do have several teachers with full sleeves. What we look for is someone who is going to be able to build a relationship with students, and if you have tattoos that will offend someone, you probably would not be a good fit. If it is subtle and will not distract from you being able to teach, it probably will not be a problem,” administrator Mr. Bell said.

Mr. Hybart, a math teacher at NC, painted an array of colorful tattoos down his forearm. He feels his tattoos benefit him in a closer relationship with his students, making him relatable to today’s open minded generation with an accepting view on tattoos. He  believes older teachers hold different values causing them to view him differently because of his tattoos, but he accepts those opinions as long as those individuals do not degrade his character and love for his job.

“I did not feel the need to hide my tattoos while interviewing for North Cobb. I did not think my tattoos reflected on how good of a teacher I thought I could be and the content knowledge I felt I was a master in,” Hybart said.

Reactions to Hybart’s decision to ink his body varied, including his distressed parents who held the mindset he would never find a job or amount to anything because of his decision. Now, happy to say his parents were wrong, he does not regret his tattoos.

“I think tattoos mean something different for everyone. For me, my tattoos represent different stages of my life. I might not necessarily feel the same way about what some of my tattoos represent, but that was an important step of my life that lead me to who I am today. It’s nice to reflect on who you were and what you want to become,” Hybart said.

Although Hybart knows people who do not always live by what they say, he does not think tattoos of any form or placement should reflect on the ability of a teacher to affect a young student’s life.

Teachers who want to express themselves with tattoos may ink themselves in an easy to hide area. Students will go throughout the year in a teacher’s class never even seeing the tattoo.

Mrs. Botella, the chorus teacher at NC, models a tattoo she can easily hide from students on her upper arm. She believes tattoos affecting a career should depend on the content of the art. According to Botella, tattoos that could offend someone should stay covered. She does think people, including her students, coworkers, and family view her different because they accept that she makes her own decisions. She likes to view her tattoos as a learning experience for her students, teaching them to think before they act and never permanently tattoo something until thinking over the decision.

“I do not think tattoos are a good thing or a bad thing, I think they are a personal thing. If you love something or someone enough to permanently put it on your body, then that says a lot about that thing or person,” Botella said.

She believes that everything depends on the boss of the job and if they view tattoos as unprofessional. She recommends always asking for their opinion and if they request to cover the tattoo, respect them by doing so.

Most of today’s students, who stand as the main concern for teachers, do not seem affected by their teachers modeling tattoos due to the open mindedness of this younger generation. Typically accustomed to seeing tattoos on an everyday occasion, they do not view them as negative or different.

“They (teachers) are expected to be a “good” influence on us, and that often actually means conservative,” senior Colman Dupuis said.

Amy Maxwell, who works as a daycare teacher and INtrinsic Scholars Academy has multiple tattoos covering her arms. She claims that the young two to three year olds in her classroom do not mind or pay attention to her body art, but she feels insecure around some parents. Occasionally, more judgmental parents send her demeaning looks or make snarky comments about her tattoos. Maxwell holds self-expression as one of the most important lessons in her life, and she feels that everyone should express themselves in whatever way they want. She holds herself and her children to this standard, and tries daily to implement this belief into her classroom.

Maxwell feels like without her tattoos, she would feel less judged by some parents, but she does not regret them in the slightest because they all have a special meaning to her. She feels that tattoos, since becoming highly common, need acceptance.

“Tattoos are a way for people to artistically show who they are on their bodies, and I do not think anyone should be able to take that away no matter who you are or what you do. It is not a problem for teachers to have tattoos. If anything, it is good for students to see their teachers are open to express themselves,” senior Katelyn Tillis said.

Behind every tattoo stands a talented tattoo artist. Many artists limit who, what, or where they will tattoo on someone in order to prevent backlash. A tattoo artist who goes by the name of “Cooper” works at Revelation Ink Tattoo Emporium in downtown Acworth and thinks the opposite.

Cooper began inking his body at the young age of 15 in 1986, a time when tattooed people suffered from a poor reputation. Although tattoos now cover every part of his body, including his face, head, and hands, he does not even notice them anymore, he just sees them as part of his body now.

“I do not see all this [his tattoos]. It is just me, and it is just a part of my body now,” Cooper said.

He knew when making the decision to tattoo his body in ways he could never cover that he would never hold a regular job. He needed a battle plan, and he thinks anyone who gets tattoos needs one as well. Cooper believes that tattoos should affect a career. He thinks everyone in a professional business environment, such as a teacher, relater, or doctor should withhold a certain professional look to match their job.

“If I went in for an interview, I would not hire me for anything. I expect professionalism, I got tattoos to be rebellious, but you cannot have your cake and eat it too, you have to take the goods and the bads. There has to be a line drawn, either you are a rebel or you are not,” Cooper said.

He thinks young people with newer tattoos who complain about the discrimination and stereotypes that come with tattoos will one day become used to the feeling as he eventually did.

Freshman English teacher Mrs. Laura Sunderland expresses herself with an array of colorful flowers and art across her arms as well. Nervous about teaching with tattoos, she hid them away for her first couple of years in the classroom, but once she started embracing her tattoos, she felt as if they made her more relatable. She feels the teachers of her generation do not even notice her tattoos, while the older generation of teachers view them negatively and maybe even unprofessionally. Although a majority of people in her family tattoo themselves, her mom did not want her to cover the “perfect skin she was born with.”

“I think people should be able to do what they want with their body. It is a great way for people to express themselves and make their bodies prettier to them and celebrate what they have,” Ms. Sunderland said.

Although she holds no opinion on tattoo placement, she thinks a tattoo should be judged on its content rather than its placement.

Tattoos still stand as a form of expression and always will. People will continue to get tattoos despite if the world still views them as taboo or not. With the new generation of more accepting, open-minded people filling the spots of an older, more close-minded generation in the business world, maybe the idea of painting one’s body and constricting that person’s ability to succeed in a professional environment will end.