The vaping epidemic has staked roots in the halls of NC. These addictive devices spread as students find more curiosity in vaping and see their friends purchase more and more products. Of the many kinds of products, Suorins and Juuls seem like the most popular style of e-cigarettes with teens at NC. (Photo from www.HealthCentral.nz )

The vaping epidemic has staked roots in the halls of NC. These addictive devices spread as students find more curiosity in vaping and see their friends purchase more and more products. Of the many kinds of products, Suorins and Juuls seem like the most popular style of e-cigarettes with teens at NC.

The vaping epidemic: What’s the buzz about?

In the 1950s, cigarettes formed an indelible part of the social landscape. All around America, men and women smoked publicly and privately all day, every day. Now, in 2019, the most popular thing for people to hold in their hand has become a Juul, Suorin, or vape product.

“Back in the 90s when my husband started smoking, you could literally smoke at Waffle House. It was just one of those things where it was socially acceptable and it wasn’t a big deal and now it seems like vaping is a little more socially acceptable,” AP Statistics teacher Cara Hamilton said.

Unlike a cigarette, electronic vape products do not contain tar, seeming to constitute a safer and less harmful alternative to a cigarette. Although these products seem safer, the popularity and craze seem all too similar to when cigarettes first appeared.

“People are still a little hesitant about [vaping], but at the same time it’s not as gross as cigarettes,” Hamilton said. 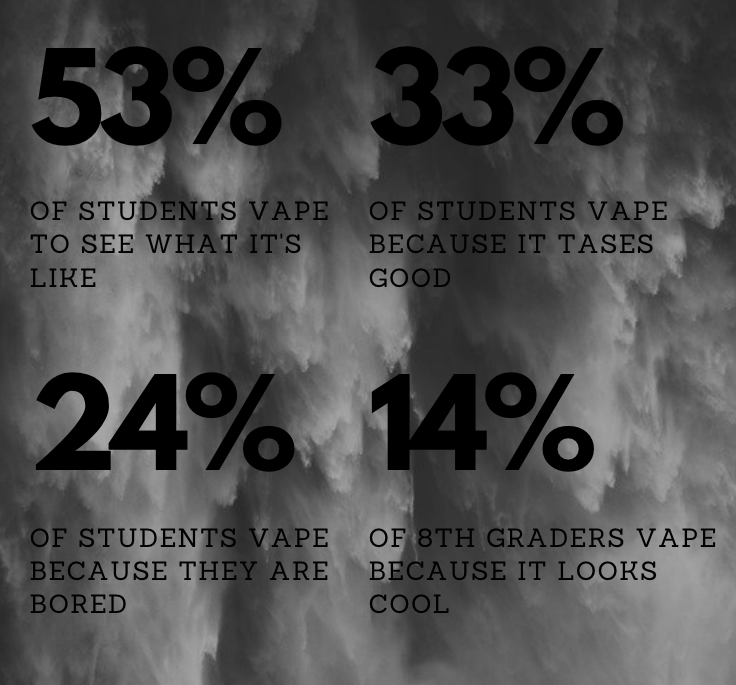 These products, originally made to help keep adults from smoking cigarettes, has made a prominent social appearance among teenagers now. While most vapes remain used with the correct intentions, within the halls of NC, students seem to purchase a Juul or suorin purely for the “buzz” or because of others in their social circle own one as well.

After surveying 100 students at NC—from multiple grade levels and genders—62 percent of the students claimed to own an electronic nicotine product. The survey also revealed an astonishing statistic that proved the social status of vaping. Of the 62 students who claimed they owned an e-cigarette, 96 percent stated that their friends also owned an e-cigar/ette.

“So I’ve seen videos of people blowing cool vape clouds so a small part of me thinks that they just want to look cool,” Hamilton said.

More often than not, students obtain their new habits from watching their parents, siblings, and—mostly—friends. After one student purchases the product, the entire friend group finds the idea new, cool, and fascinating. Students in the survey claimed they purchased the product to “seem cool” but also said they wanted the product for “the buzz.”

Different e-cigarette products offer different qualities to students as well.  Juul, the most popular product on the market, originated as a preventative product to help adults quit smoking cigarettes. The products quickly began spiraling out of control when teenagers found out using one gave them a pretty intense buzz.

“Juuls have definitely become super popular in friend groups at NC. I could confidently say that almost everyone I know has one,” senior Maggie O’Bryan said.

Juul pods came in all kinds of sweet flavors that advertised perfectly to the younger public, such as mango, fruit punch, creme brulee, and mint. However, after the Food and Drug Association (FDA) found out about the craze, rumors spread that Juul would eliminate all the sweet flavors. Since Juul gained so much revenue from selling billions of pods, the company refused to take down the flavors, but inevitably the required age increased to 21 in almost all gas stations to limit sales.

Although the age requirement went up, smaller companies found ways to outsmart the system by creating Zip Pods. Zip Pods contain more nicotine and come in more flavors than Juul pods, so the craze for Juuls still continues, as students make runs to their nearby Cloud 9 or Vape Queen shop to purchase these replacement products.

Although Juuls remain popular around NC, students may also resort to the second most popular brand, Suorin. Unlike Juuls, which use disposable pods, Suorins come with reusable and refillable pods. Along with the purchase of a Suorin, students would also buy nicotine juice—50 mg, 45 mg, or any nicotine amount—to fill the product.

“Suorins are definitely just as popular as Juuls if not more. Juul brought up the prices a lot on pods, so a lot of kids just went to other cheaper options,” O’Bryan said.

Suorins come in a number of different styles, a feature which appeals to students who want something easy to hide or easy to refill. The Suorin Air, the first suorin product to surface, can fit into any pocket or wallet with its small flat design. The Suorin Drop does the same but with better technology, new colors, and a new shape. Both the Suorin Edge and Vagon share similar qualities in that they both blow bigger and thicker clouds of smoke and hit stronger as students inhale the vapor.

Truth, a company devoted to ending the smoking and e-cigarette epidemic, avidly tries to upload ads on popular teen applications and television shows to send a message to younger students. The company’s ads appear most commonly on Snapchat, the popular app that allows students to send video and picture messages back and forth. 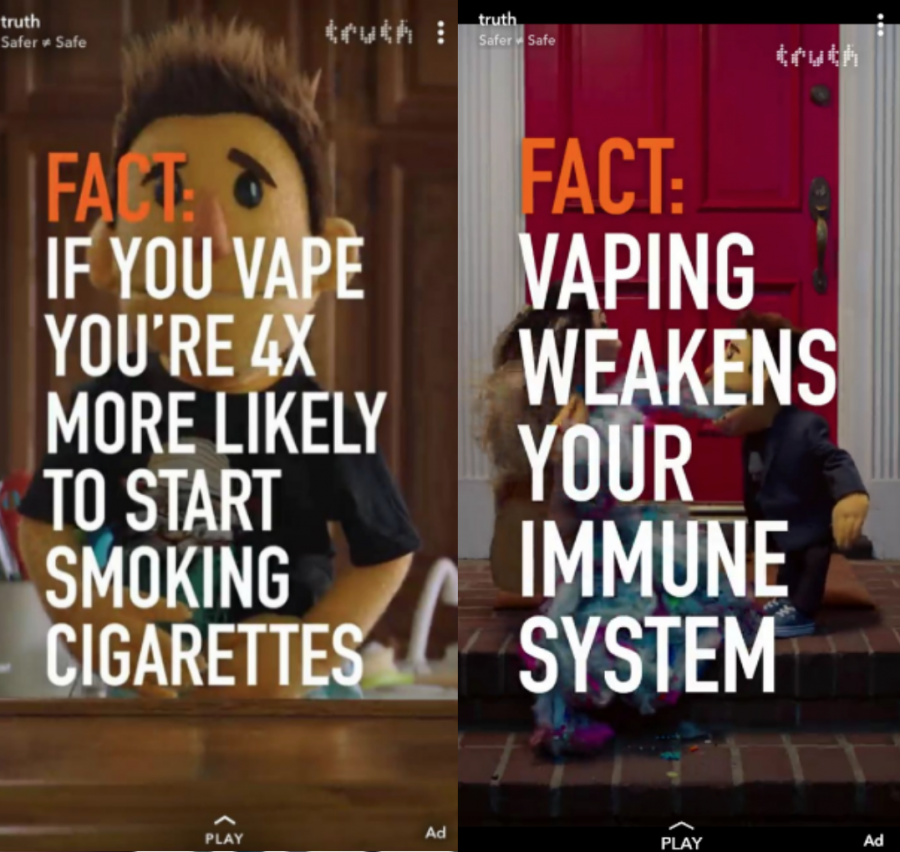 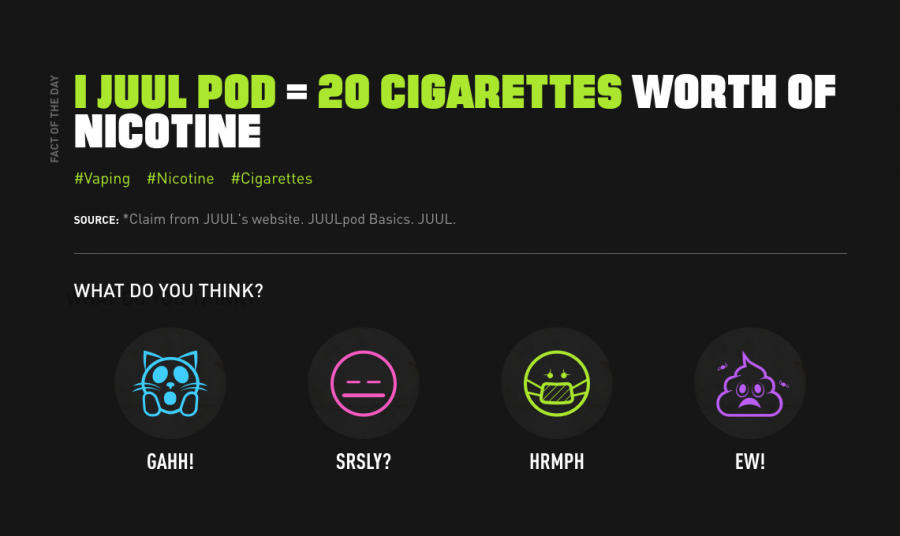 Although the product still seems technically better than an average cigarette, the long term effects still remain unknown, since this generation seems to form the proverbial guinea pigs of vaping.

No one knows the true effects of vaping similarly to when no one knew cigarettes caused lung cancer five decades ago. This generation remains as the lab rats for vaping and what the future holds for individuals.

With endless options for any kind of nicotine product, a student can walk into a vape shop and purchase any of these products. A habit forms young, and it seems that NC has enthusiastically embraced the habit of vaping.