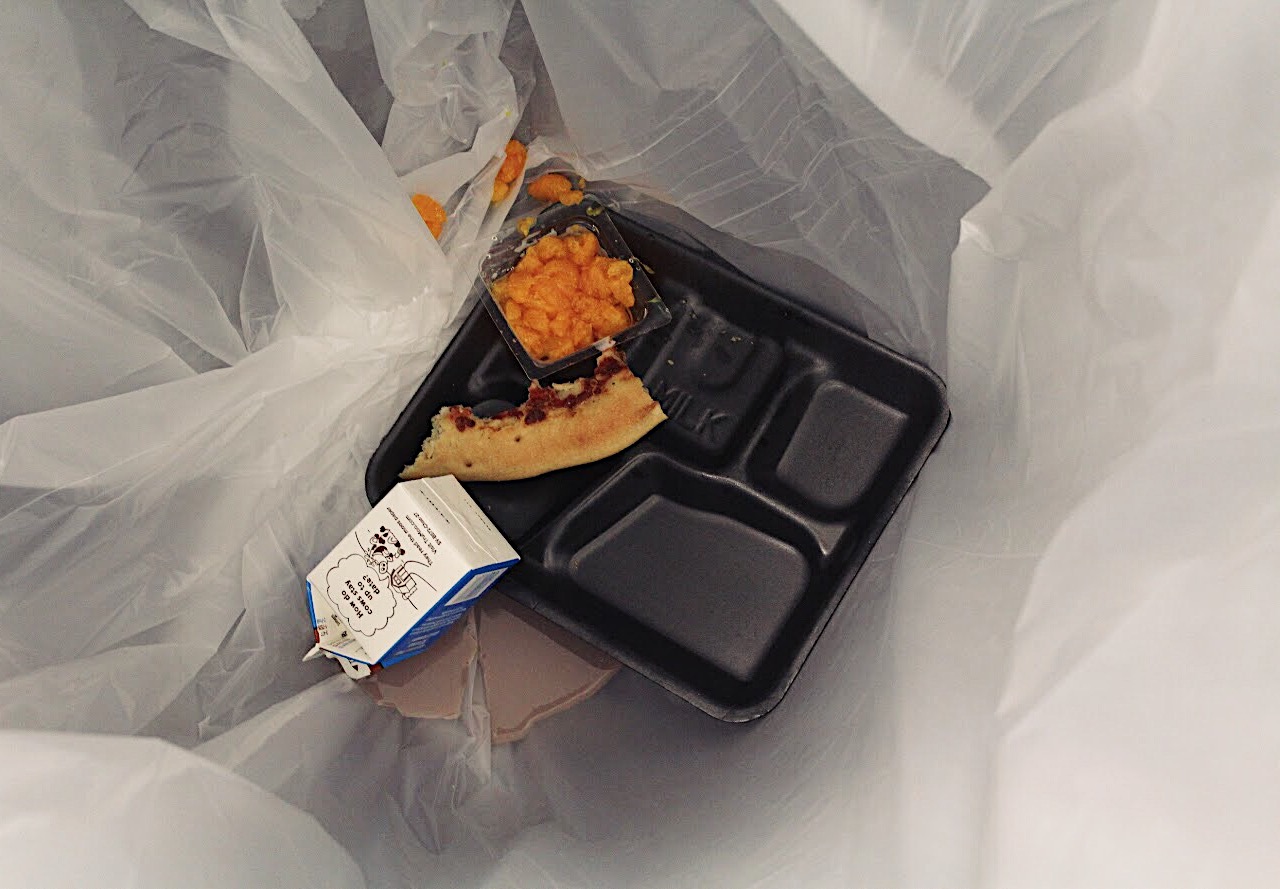 A fresh pizza crust, container of juicy mandarin oranges, and a half full carton of chocolate milk—all perfectly edible—sit at the bottom of the trash can at the beginning of B lunch. What’s with all the waste? (Tara Anastasoff)

A fresh pizza crust, container of juicy mandarin oranges, and a half full carton of chocolate milk—all perfectly edible—sit at the bottom of the trash can at the beginning of B lunch. What’s with all the waste?

I’m not going to eat it; just throw it away.

Every day, 150,000 tons of food in America goes to waste, away from the hungry mouths of starving populations overseas and into the country’s landfills. 150,000 tons weighs thirteen and a half times as much as the Eiffel Tower; one hundred times as much as a Sierra Redwood; and ten thousand times as much as an average ship’s anchor—but what makes this figure so large? What happens to the slightly browned bananas at the supermarket and the partially crushed cereal boxes? What happens when a person passes on a bag of slightly yellowed oranges for perfectly ripe oranges, only for the oranges to rot in the fridge?

While not all outdated food ends up attracting fruit flies in landfills, 40 percent of all food produced goes from factories to grocery store shelves, to the dumpster: supermarkets themselves throw away 43 billion pounds of product annually. Shoppers focus on the quality of the product, inspecting the exterior of the package to assume what its interior will look like. This judgment leaves a surplus of products on the shelves, and barely expired foods from mainstream supermarkets end up in the trash can. If the food spoils or still remains not purchased at the discount supermarket, the retailer has no other choice but to throw it away. Although Publix announced that it donated $5 million to the Feeding America network among other nonprofits, they fail to provide information on what happens to food that does not sell in the supermarket. Recently, The Chant contacted the Atlanta Publix Corporate Division to inquire about their food waste but did not receive a timely response.

Restaurants, on the other hand, donate only 1.4 percent of their unused food, recycle 14.3 percent, and throw away 84.3 percent of it.

While the app “Too Good to Go” allows people to purchase leftover food at a discounted price from restaurants around the United Kingdom, no app like this currently exists in America. However, non-profit organizations, such as Rescuing Leftover Cuisine, strive to alleviate the growing issue of business and food waste in the United States. Kept alive with the help of volunteers, the non-profit locates and collects excess food from restaurants, hotels, and catering companies and brings it to homeless shelters within a community.

“We coordinate with shelters around the area, including Shephard’s Inn and the Covenant House. Atlanta has a growing gentrification problem that has pushed a lot of people out of their homes,” Atlanta representative for Rescuing Leftover Cuisine Rachel Bergstrand said.

As a society, more and more people are opting for minimalistic and “zero-waste” lifestyles, but consumerism—the Devil on America’s shoulder—tells people that they must buy, and buy in excess, to reach happiness and flaunt their prosperity. While discussing the impacts of consumerism opens an entirely new can of worms, the impacts of this line of thinking persists in food culture. Why buy six bottles of Coke when a twelve-pack offers more product for a slightly lower per unit value? Well, those extra bottles will likely sit in the back of the fridge until someone notices the expired drinks, which they will promptly throw out. Not only do the extra drinks become a waste of money, but a waste of product as well. On a larger scale, about 40 percent of the food the United States produces each year goes to waste, either rotting on shelves or polluting landfills, contributing to a whopping $165 billion wasted annually on uneaten—and perfectly edible—food.

“The bulk of our donations are deli foods and also frozen meats. Our goal is to provide as much salvageable food as we can to deliver to shelters around the area,” Bergstrand said.

With the growing problem of hungry and malnourished children not only in America but on a national scale, this food should land on their plates rather than in a feast among rats and flies. While this uneaten food could feed 25 million Americans, one in six people still faces hunger. Even McDonald’s in the United Kingdom has laws in place that state they cannot give away cooked food, calling it a “breach of food safety policies.” The restaurant sends this food to composting, rendering, and anaerobic digestion—essentially becoming fertilizer or other organic material rather than feeding the country’s starving population.

Although McDonald’s cannot distribute cooked food to food banks or homeless shelters, other restaurants have programs and partnerships in place that allow them to donate unsold food. While they legally cannot distribute this food, restaurants typically allow their employees to take home leftover food at the end of the night to prevent waste. Pizza Hut became the first company to implement a national food surplus donation program, starting their “Harvest Program” in 1992. The program exists as a component of Food Donation Connection (FDC), which helps businesses implement the Harvest Program. Pizza Hut, FDC’s first client, donates “error pizzas, no-show pizzas, and leftover buffet items that are perfectly safe to eat” to partner charities that then distribute this food to needy families in the area. Panera also prides itself with its “Day-End Dough-Nation” movement, where a person from a non-profit community organization picks up the extra bread goods and brings them back for distribution among places such as food banks, nursing homes, and soup kitchens. For Kennesaw’s locally-owned Honeysuckle Bakery, even they do their part with donating excess food to lower-income areas of the community.

“We donate all excess goods to different charities and organizations around the community. Right now, we’re mainly donating to Encounter Church, and somebody comes to pick up the wrapped good about once every two or three days, so the treats are still fresh,” Honeysuckle Bakery employee Annie Ellison said. 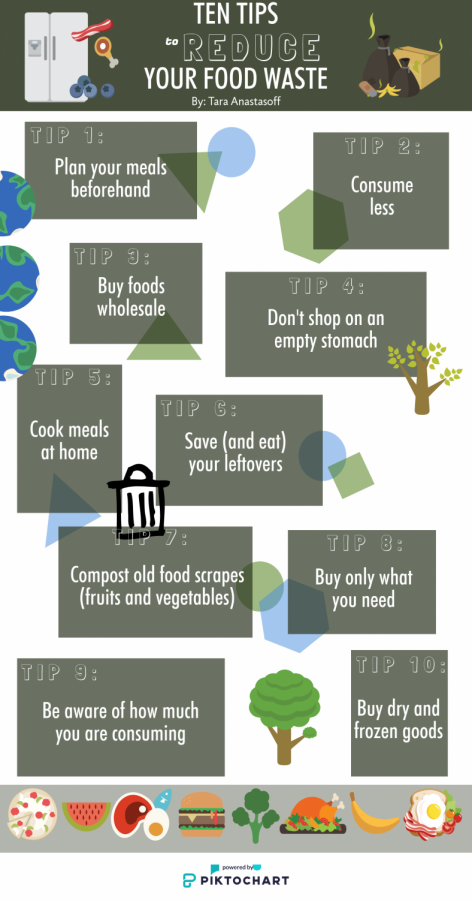 On a person-to-person basis, American households throw away about 25 percent of the food that they purchase from restaurants and supermarkets. More than two-thirds of this discarded food—half-eaten apples, uneaten grains of rice, and partially full bottles of juice—could have been eaten, which could also have been used to create 68 million additional meals. While soup kitchens and other food pantries cannot accept platefuls of half-eaten food, taking proactive measures while purchasing food could alleviate this shocking value.

Aside from the pain of the startling realization that this trashed food could feed the hungry mouths of starving children, the food that inevitably ends up in landfills accounts for 23 percent of all methane emissions in America. Methane, one of the four main types of greenhouse gases, is 25 times more powerful than carbon dioxide. In fact, a United Kingdom study estimates that “if food scraps were removed from landfills, the level of greenhouse gas abatement would be equivalent to removing one-fifth of all cars in the country from the road.”

While food waste in America continues to rise, increasing one’s awareness of the shocking statistics and gaining a perception of this problem will help diminish waste and lead to a potential solution to poverty.

Living a lifestyle with less food waste and waste overall will help preserve our beautiful planet. The future of the world lies in your hands—what are you going to do with it?