The influence celebrities hold over teenagers increases daily, but how exactly do these Hollywood elite influence the political choices made? (Maddie Dean)

The influence celebrities hold over teenagers increases daily, but how exactly do these Hollywood elite influence the political choices made?

Celebrities. Teenagers idolize them and follow their every move. They influence everyday decisions, from what makeup brands used to what restaurants to frequent, celebrities remain quite often the “god” in today’s society. When teenagers see their favorite celebrity use a certain brand, it creates an urge inside of them to buy that product. According to a study published by the Journal of Advertising Research, if companies use celebrities to endorse their product, sales of several brands will increase more than 20 percent. If a no-name brand becomes popular overnight thanks to a celebrity endorsement, what else could celebrities influence in our lives? This question then arises: “How can a celebrity impact the political decisions of young Americans in today’s society?”

Celebrity endorsers maintain the role of controlling the public’s opinion on a product or person. Marketers spend millions on celebrity endorsers to leverage “secondary brand associations” – which means, people, transfer their opinions and feelings about a celebrity to the brand. For example, after Beyonce’s commercial for Pepsi was released, Pepsi’s net worth increased by  $50 million. In order to capture the public’s interest, celebrity endorsers should obtain the following traits: attractiveness (physique, intellect, athleticism, lifestyle); credibility (expertise, trustworthiness); and meaning transfer (compatibility between the brand and the celebrity). 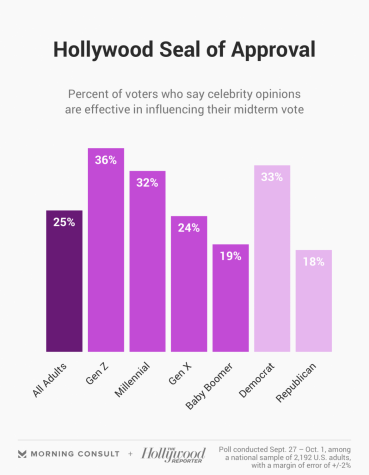 Since the 1920s, the realms of celebrities and politics share an intimate relationship with one another. In the U.S. 1920 election, American actress and singer Lillian Russell endorsed presidential candidate Warren Harding; in the 1960s, Rat Pack members Sammy Davis Junior and Dean Martin endorsed John F. Kennedy; and in 2008, Oprah Winfrey and George Clooney supported Barack Obama. In recent years, famous American actor Clint Eastwood endorsed the current President of the United States, Donald Trump, in the 2016 elections during which time, the use of celebrity endorsement increased drastically. Throughout the election, forecasters predicted that Democratic candidate Hillary Clinton obtained a 70% to 99% chance of winning due to over 1,000 celebrity endorsers, including Beyoncé and Katy Perry. Meanwhile, Republican candidate Donald Trump received very few endorsements.

“Depending on their [the celebrities] status, how liked they are, and how seriously people take them, celebrities can help increase voting. For instance, nobody would take rappers, such as 6ix9ine, and other celebrities with questionable reputations or personalities seriously,” NC senior Marianne Ocampo said.

The ability of celebrities grabbing and holding consumer attention remains a known fact. know Yet, expertise and credibility remain important elements when wanting to influence consumers. Interestingly, people consider celebrities more credible and trustworthy than politicians according to Science Direct.

During the Government Shutdown earlier this year, Rapper Cardi B took to social media to post a video on her Instagram about the shutdown. In the video, Cardi B praises the government employees, who continued to work without pay. Cardi also claimed that the shutdown remained crazy saying, “This is really serious, bro. This is crazy. Like, our country is in a shambles right now, all for a wall. And we really need to take this seriously. I feel like we need to take some action.” After her rant, fans suggested for Cardi to stick with music instead of weighing in on politics. However, Cardi B’s former AP Government teacher, Joan Hill came to the rapper’s defense in a Facebook post saying, “For those of you on my feed who are trashing Cardi B for representing a political voice, 1) she probably scored higher than you on the US History Regents exam and was in my AP govt class b) you’re not nearly as busy as her, and what have you done to advance political discourse in this country? C) She has a national platform and is using it to speak about things that are important… why can’t we respect that? d) Shut up and take a seat.” 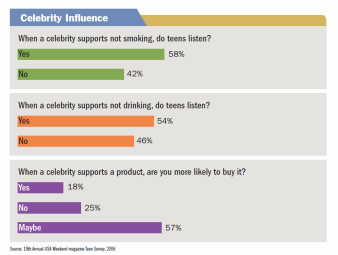 After Cardi B’s rant on Instagram, the rapper later received an invitation from the Democrats to speak at “a reception of her choice” sometime in May when her Invasion of Privacy Tour hits Iowa. According to Polk County Democrats chair Sean Bagniewski,  “She [Cardi B] speaks to the new activism in the Democratic Party.” Fans happily supported this invitation, even going onto Twitter to say, “ You are able to speak about politics & govt in a way that reaches those who are currently underrepresented & underserved by their govt. If it gets more people involved and voting and caring it’s good. Go for it. You keep yourself well informed. Share your knowledge.”

“I believe celebrities with young fan bases really should push voting and voter registration, even if they do not endorse specific candidates,” junior Jordan Ross said.

Studies show that a combination of lack of political knowledge and candidate loyalty makes first-time voters valuable swing voters and fairly susceptible to personal influence. Therefore, the potential for opinion leaders, like celebrities, to shape public opinion benefits the candidate. 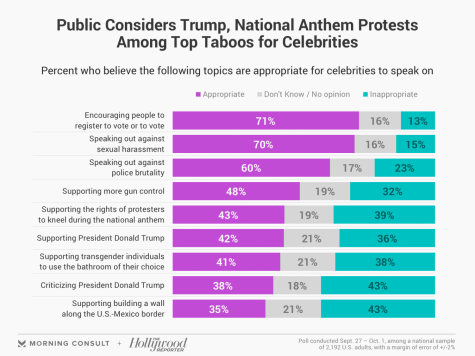 “I think it’s best for celebrities to know their audience to figure out an appropriate comment. But staying neutral is oftentimes more detrimental. Like, rumors went around about Taylor Swift’s views because she really didn’t talk about politics until she mentioned voter registration days before the deadline but of course, it is always best for them to be educated. People can’t use celebrities as their main news source for sure,” Ross says.