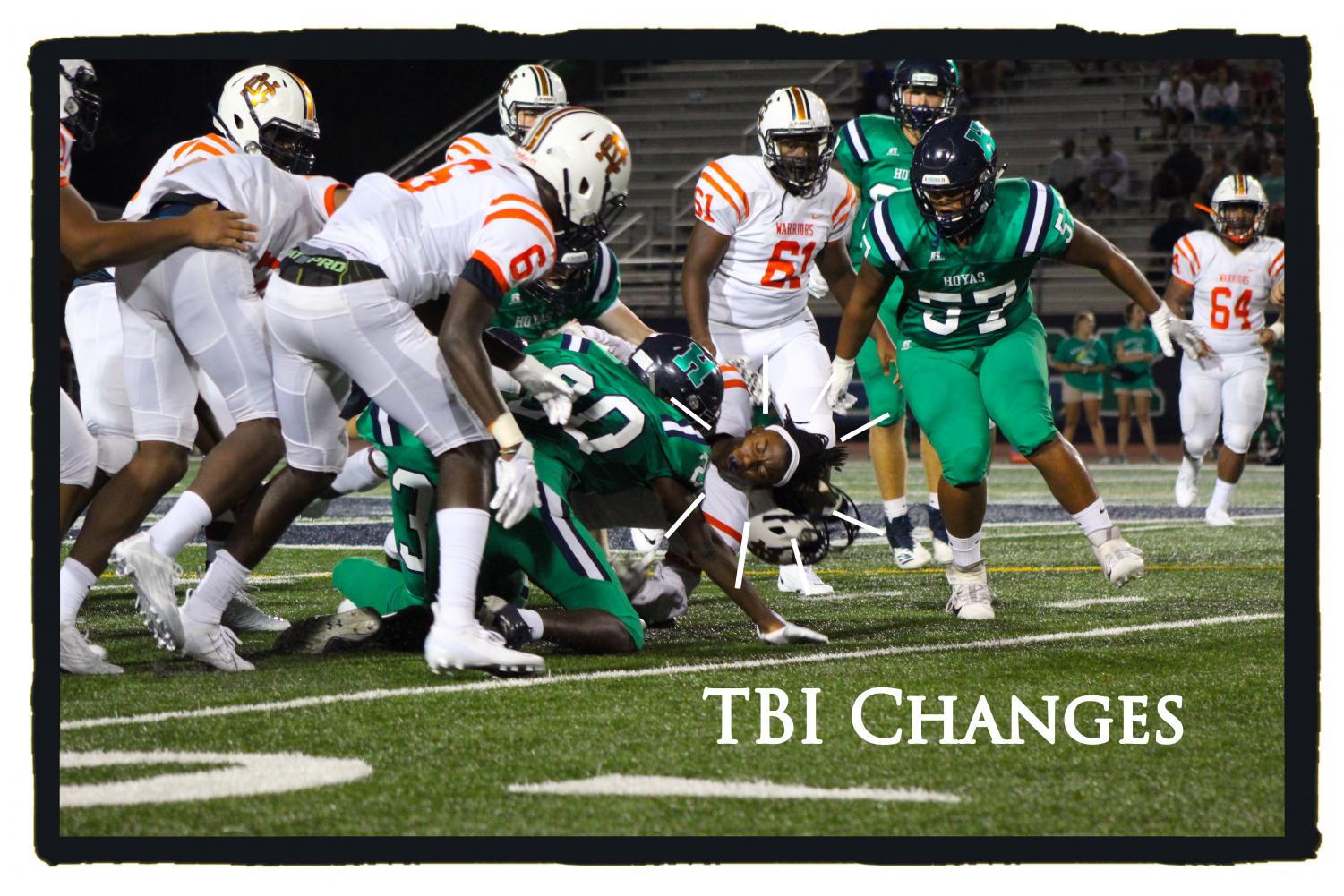 An NC varsity football player (pictured above) sustains a blow to his head, causing his protective helmet to fly off. No matter the level of sports, amateur or professional, the dangers of traumatic brain injuries affect one’s future tremendously. “Last basketball season, I sustained a concussion and it affected all areas of my life” sophomore varsity forward Alex Acosta said. (Peyton Stack)

An NC varsity football player (pictured above) sustains a blow to his head, causing his protective helmet to fly off. No matter the level of sports, amateur or professional, the dangers of traumatic brain injuries affect one’s future tremendously. “Last basketball season, I sustained a concussion and it affected all areas of my life” sophomore varsity forward Alex Acosta said.

Protect your head. It’s your future.

For Southern University wide receiver Devon Gales, Saturday, September 26, 2015, started off as an ordinary gameday. The autumn breeze eased through the air, reminding those of the fall season and its leading counterpart: football. Fans piled into Sanford Stadium to watch their Georgia Bulldogs take on the Southern LuCumba, as Gales wrestled into his white and blue jersey, eagerly awaiting kickoff. After the annual team introductions, play began and as analysts predicted, the Bulldogs racked up point after point; yard after yard. The band roared, players clashed, and fans screamed, but all seemed to stop with two minutes left in the third quarter. The scoreboard read 48-6 UGA, and another kickoff ensued. As the LaCumba returner began to run the kickoff back, Gales blocked Georgia defenders in order to set his teammates up for success. Georgia kicker Marshall Morgan and Gales collided in a helmet to helmet manner, leaving Gales on the ground, and Morgan running back to his sideline in celebration. Unlike Morgan though, Gales failed to arise back up on his feet. Rather, a stretcher rolled out to transport Gales to the nearest hospital for medical examination. Test after test, doctors discovered Gales suffered a spinal contusion that left him paralyzed from the waist down. His path, his routine, and his life, all got thrown for a loop. Family and fans all demanded an explanation behind this injury, and doctors labeled it with one conclusion. Gales became another victim of a TBI (Traumatic Brain Injury).

3,800,000. Sport fanatics may assume this number describes the net worth of a professional athlete or the amount of garbage inhabiting our oceans. The short answer: no. This number instead describes the amount of TBIs (Traumatic Brain Injury), commonly associated with concussions, that occur in high school sports every year. Teens between the ages of 15 and 18 sustain these traumatic blows, causing lasting damage to their memory, sensory neurons, and spinal structure.

As seen in the famous 2015 drama Concussion, starring Academy Award winner Will Smith, the effects of TBIs remain greatly known, but sports affiliates question the adaptations taken to accommodate this arisen crisis. Teams, athletes, parents, and even fans all look to organizational figureheads such as the NCAA (National Collegiate Athletic Association), to change equipment and sporting techniques in order to limit the chance of sustaining a blow or obstruction to the head.

“Sustaining an injury to my head last spring in an NC soccer game, changed my normal routines and really entire life. Almost every aspect of my life was affected either slightly or majorly. There were days in class where my head felt super dizzy, and I couldn’t focus on anything. My grades stayed the same but it took a lot of extra work. Also, if my head hurt too bad from natural sunlight, I wore sunglasses in order to limit the exposure of sun to my eyes,” sophomore Varsity goalkeeper Reagan Schooler said.

In order to decrease the chance of suffering an in-game TBI, leagues and organizations worldwide regulate the required equipment needed to participate in contact sports. The NFL (National Football League) and CFL (Canadian Football League) both regulated their helmets after a season-high rate of over 210 concussions became evident and later reported in the 2018-2019 NFL season. This change featured material alterations, such as TPU cushioning (Thermoplastic Urethane Cushioning) in helmets that needed an upgrade from the previous foam material. In both football and lacrosse, the facemask area of helmets received multiple material upgrades, in order to soften blows to the head. The dorsal side of the helmet also received extra TPU, in order to safely support the neck area. Any helmets missing these required elements ultimately became expedited from both sports, leaving players several safer options.

“Truthfully, every time I step out on that (football) field, I have a chance of getting injured. Football is a game I’ve played my entire life, and injuries can always determine someone’s future. My goal is to play the game safely, correctly, and as well as I can in order to reach the goals I set out to achieve” sophomore varsity linebacker Vernard Martin said.

Along with the expendable helmet changes, alterations to the rules and techniques used to execute plays in today’s game. All levels of football teach and require players to tackle preferably below the waist, in order to lessen the chance of injury to the head or neck. If players make contact with an opposing player’s helmet, penalties or disqualifications arise based on the degree and situation of contact.  In baseball, pitchers are discouraged and penalized if pitches connect with a batter’s head or upper area. Amongst all athletes in any contact sports, the wrong movement or technique used upon another competitor may ruin or damage the future of either side.

“One of the scariest things to think about as a professional athlete is my career can be suddenly changed at the snap of a finger. I’ve seen guys get hit so hard, they get knocked out immediately. Playing the game right, and playing the game with respect can greatly affect athletes’ futures”  former NC alum and Oakland Raider tight end Darren Waller said.

The famous tale of Devon Gales, brought attention nationwide around the issue of athlete safety in contact sports, putting pressure and controversy around the controversial NCAA brand. Further research into TBI history and the effects that take place provide contact sports with a negative connotation, causing young families to avoid them.t For every touchdown pass Tom Brady throws that NFL fans see on their TV screens on Sunday afternoons, and for every electrifying dunk LeBron James pulls off in-game, come thousands of athletes whose career became cut short due to TBIs. Though the advancements and changes made, athletes become left with one question: can contact sports become safe enough for affiliating groups? 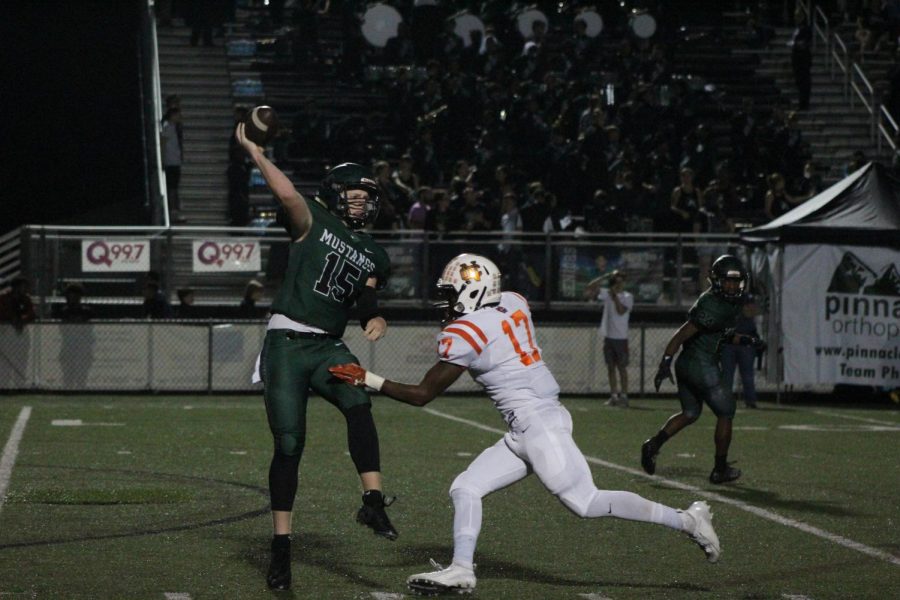 Gallery|4 Photos
Haley Kish
In NC’s sixth game of the season against the Kennesaw Mountain Mustangs, senior middle linebacker Grant Wooten pursues the Mustang quarterback, almost colliding helmet to helmet. As the quarterback throws in motion, he lands in the defenseless position, allowing the chance of a TBI to occur. If Wooten did not properly tackle below the waist, the Mustang quarterback and Warrior defense may both receive a negative outcome.
Leave a Comment