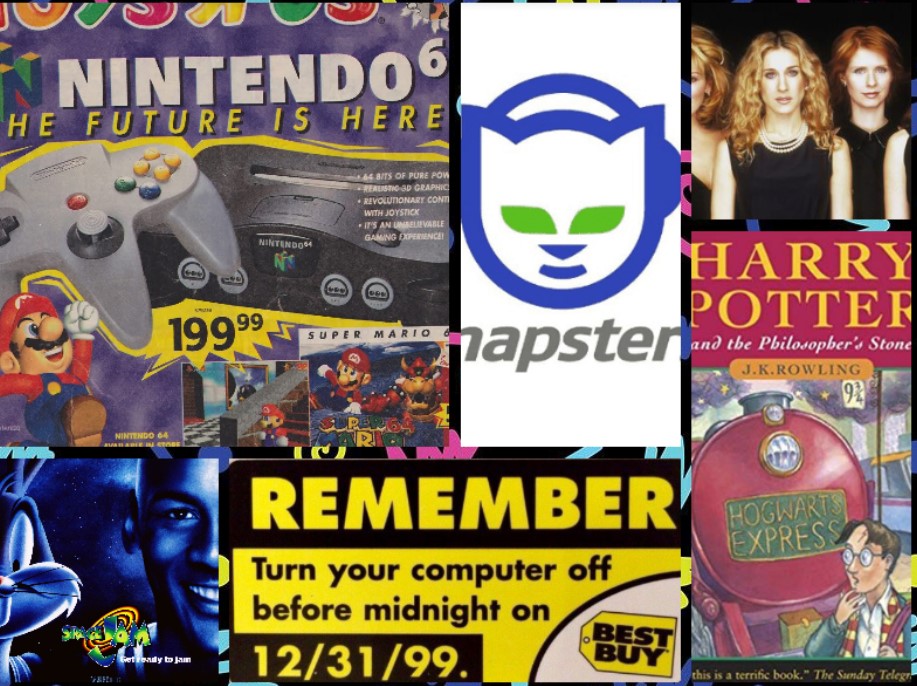 The entertainment landscape of the 1990s continues to leave an immense impact on pop culture today, nearly 30 years after the decade’s start-with such generation-defining films like Jurassic Park and Star Wars Episode I: The Phantom Menace, legendary TV shows like Friends and Rugrats, iconic musicians like Tupac and the Spice Girls, and acclaimed video games like The Legend of Zelda: Ocarina of Time and Metal Gear Solid, this decade continues to exist in the cultural zeitgeist; images from left to right, clockwise: an Toys-R-Us advertisement for the Nintendo 64, the logo for the late 90s music service Napster, the cast of HBO’s Sex and the City, the first edition of 1997’s Harry Potter and the Sorcerer’s Stone, a Best Buy ad warning of the Y2K bug, and a poster for 1996’s Space Jam. (courtesy of Napster, HBO, Best Buy, Space Jam)

The entertainment landscape of the 1990s continues to leave an immense impact on pop culture today, nearly 30 years after the decade’s start-with such generation-defining films like Jurassic Park and Star Wars Episode I: The Phantom Menace, legendary TV shows like Friends and Rugrats, iconic musicians like Tupac and the Spice Girls, and acclaimed video games like The Legend of Zelda: Ocarina of Time and Metal Gear Solid, this decade continues to exist in the cultural zeitgeist; images from left to right, clockwise: an Toys-R-Us advertisement for the Nintendo 64, the logo for the late 90s music service Napster, the cast of HBO’s Sex and the City, the first edition of 1997’s Harry Potter and the Sorcerer’s Stone, a Best Buy ad warning of the Y2K bug, and a poster for 1996’s Space Jam.

Longing for laser tag and the littlest pet shop: an analysis of 90s nostalgia

Among all the human emotions, longing tends to possess more power than most give it credit for: whether it’s mourning the past, celebrating anniversaries or even something as simple as a past memory resurfacing, this desire to hold on to the past existed just as long as humans themselves.

This sentiment applies doubly so regarding pop culture, especially in the last 40 years: much of 70s culture was fueled by a yearning for the 1950’s. The 80s, while its opposite regarding the national attitude, saw its music, in particular, reintroduce the “fun in the sun” vibe first seen during the Swinging Sixties. And both the 90’s and the early noughties took heavy inspiration culturally from both the 70’s and 80’s, respectively.

Looking at this trend, sometimes referred to as the Twenty-Year Itch, one would assume the 2010s would somewhat resemble the 1990s. While not entirely untrue, this statement serves as a massive understatement: this decade’s culture basically serves as a reincarnation of the 90s. from fashion to entertainment and everything in between seems so much like it did those 20 odd years ago, to a point that certain people view it as overindulgent and even detrimental to one’s health. Regardless of these views, however, it’s still the common consensus that the 90s remain the best decade of the last millennium, both culturally and for the world at large. 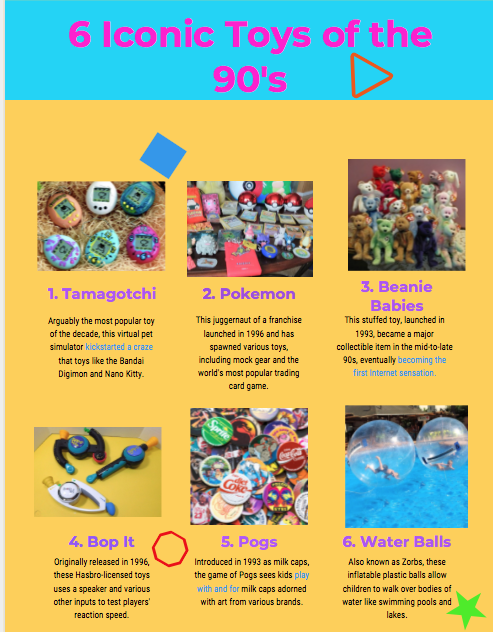 Despite this major 90s resurgence, it seems like it marks the end of the Twenty-Year Itch. Modern anthropologists seem to believe that the prominence of the Internet in the 2000s and especially the 2010s allowed people to experience those decades in their own unique way: there’s no real unified cultural experience anymore. Though this cycle could theoretically continue on, most trends on the matter show that’ll only repeat one more time for the early-to-mid 2000s.  If that’s true, an examination of 90s nostalgia and its power should occur, if only for novelty’s sake. One first needs to understand what made the 90s culture so potent in order to understand its legacy.

Essentially, 90s pop culture and media can best be defined by a sense of rebellion: video games like Mortal Kombat and Night Trap embraced their violence and adult content, regardless of blow-back from parents and even Congress. TV shows like The X-Files and Seinfeld took on network censorship with episodes like “Home” and “The Puerto Rican Day”, with cartoons following suit with episodes like Tiny Toons Adventures’ One Beer; cartoons like Beavis and Butthead earned the scorn of politicians for its violence, while The Simpsons made the 1996 episode “Two Bad Neighbors” to spite former President George HW Bush for stating family values should “[be] more like the Waltons and a lot less like the Simpsons.”

Though this might have seemed like pointless counterculture, the art that so proudly challenged traditional values blossomed and grew into a tree of innovation. The Disney Renaissance revitalized film animation, with movies like The Lion King and Beauty and the Beast becoming critical darlings loved to this day. Video games also saw marked innovation, with dominant genres today like open world and fighting games seeing most of their most defining features birthed in the 90s. The medical drama (popular now thanks to Grey’s Anatomy) got their start with shows like ER, while adult animation mainstays like Rick and Morty and Bojack Horseman can thank their existence to shows like Daria and The Simpsons.

As anyone who’s interacted with a 90s kid can attest to, they spend a lot of time talking about the greatness of their childhood, often putting down Gen Z kids in the process. Most of the time, they refer to their childhood exclusively as it relates to entertainment and fads of the time (movies, toys, etc.); but for some, it’s the mindset of the time that made that decade such a great one to grow up in.

“I feel like it was blissful growing up in the 90s, because you didn’t have the Internet to the extent that we do now: social media and all that was so much less a part of your daily life, and so you were able to enjoy hanging out with your friends and family without phones being a huge part of that interaction. You spent more time going places outdoors and things like that: we’d go to the mall and walk around, we would come up with games to play outside in large groups of people, almost like a giant hide and seek game where everyone would meet up in a local park; it’s called Manhunt. You felt free…from the mental knowledge of ‘you’re missing something on your phone’ or if you’re not checking social media you’re not going to be up on the latest post”, NC AP Seminar teacher Jenna Essenburg explained.

That does not mean the media of the time left no impact on them or the current cultural landscape, with the various 90s throwbacks and reboots says otherwise; and make no mistake, 90s kids do love them their media. However, they can see not just what the current landscape does better than the 90s, but the similarities between then and now.

“My favorite part of the 90s was Saved by the Bell and Total Requests Live on MTV-there was a lot of other 90s [culture] that I miss a lot that hasn’t progressed into the 2000s and beyond, although a lot of things have gotten better. I will say that some of it has gone in the opposite direction: for instance, not being afraid of being on an airplane that didn’t happen in the 90s. There was a lot more freedom in film…in the 90s, as people were willing to push the boundaries more and since then I’ve seen that reeled back. Some of the fads were pretty similar to what we have today: we had Pogs, Beanie Babies and Tamagotchis, whereas today we have fidget spinners. But looking back on how I grew up makes me reflect on how I grew up, because though I miss the things back then but I’m happy with the way things are now,” NC math teacher Frederick Hybart claimed.

Despite the legacy of the 90s, not everyone feels the love for that iconic decade: there’s been an increasing sentiment in the last few years that all this praise comes from “rosy introspection”, with people caring more about standing out than the decade itself.

“A lot of times I think it’s overhyped because people try to chase the clout that comes from being…‘vintage’, so to speak. So I feel a lot of people try to force it, and while the 90s is a good era I feel we kind of coerced ourselves into connecting with it just to feel different and do something that our peers aren’t. [But] I don’t see us pulling a lot of culture from it: things like bell-bottoms and arcade games are coming back, and that’s from decades before the 90s. I can see that [millennials forcing 90s culture to return] just because I have four older siblings that grew up during the 90s, and so they’ll be like ‘Remember that show?’, and I’ll be like ‘what’s that show?’ So I think that does have a big impact on it because our friends and people we interact with daily might bring up something from the 90s. Everyone wants to be in the know about something, so that could motivate us to reach back and see what it’s about,” NC senior Shaylon Walker said.

Although this era manages to find its way into the hearts of both the 90s kids grown up and the youth of today, modern pop culture still possesses some value of its own. From the massive popularity of superhero movies in the decade to the release of among the most acclaimed live-action and animated television shows, the current generation of artists managed to create countless amounts of art. Nothing lasts forever: though this wave of 90s nostalgia introduced resulted in people to iconic pieces of human art, by focusing on the creations of today we can create something potentially just as iconic.