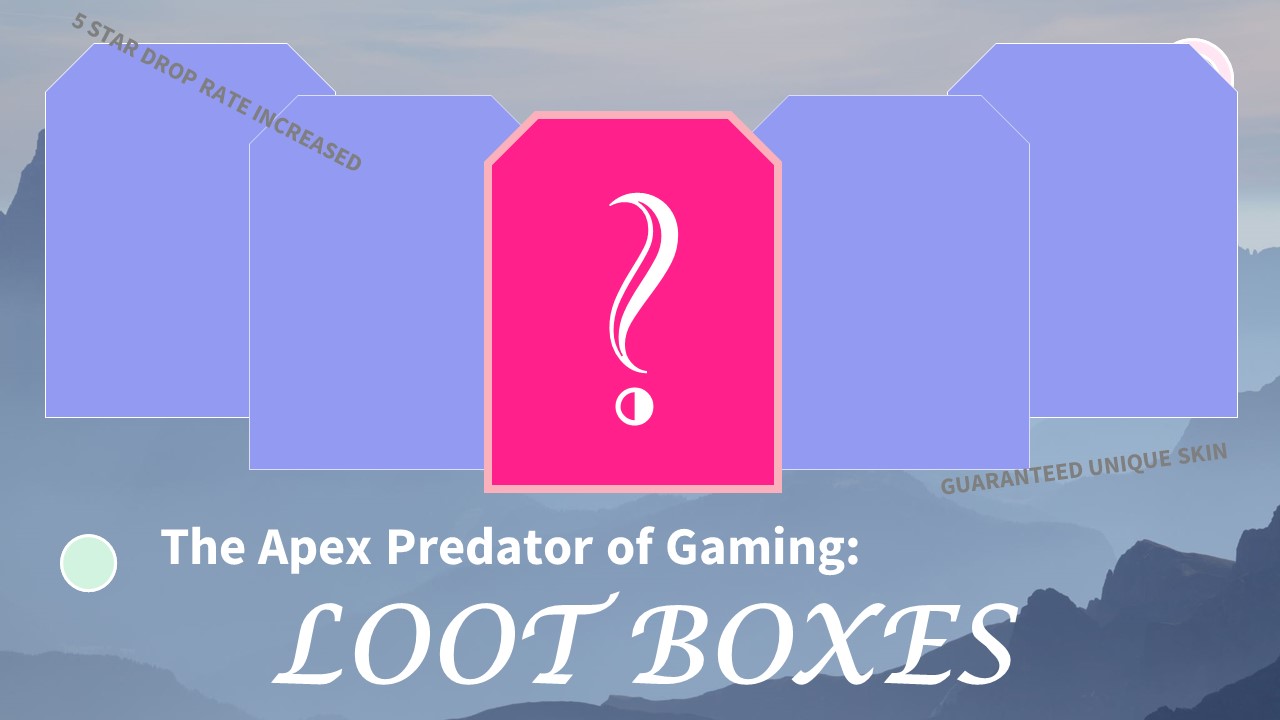 “As a generation that starts to step into adulthood, few larger differences lie between ours and the one before than the way we grew up spending money on video games. It suddenly became important for young people who play video games to recognize loot boxes as a system that benefits from our urge to spend money how we want,” senior Jmen Seso said. (Elijah Pacis)

“As a generation that starts to step into adulthood, few larger differences lie between ours and the one before than the way we grew up spending money on video games. It suddenly became important for young people who play video games to recognize loot boxes as a system that benefits from our urge to spend money how we want,” senior Jmen Seso said.

Video games rose to popularity with the crash-landing of home consoles, such as the Nintendo Entertainment System and Sony’s PlayStation2. Historically, consumers needed to buy video games they wanted to play and with that one-time monetary fee, could gain access to all a video game offered. A trend in video game sales practices introduced other forms of monetization, including gambling in the form of loot boxes.

“Loot boxes are thought to be extraordinarily lucrative for the video games industry, with one source estimating that they may have generated as much as $30 billion in revenue in 2018 alone,” media effects researcher David Zendle said.

Loot boxes in video games constitute a player paying with in-game or real life currency to gain a random item in that game. Examples of popular franchises that feature loot box systems include FIFA and Tom Clancy’s Rainbow Six Siege. Prior to the increase of loot boxes’ popularity, Downloadable Content (DLC), most commonly acted as the extra monetization on top of buying a video game. DLC allows game developers to sell a base game with complete features and then release new content later on so they can earn more money from the players, without needing to develop a whole new game. Unlike DLC, loot boxes tie into random rewards that a user may or may not earn depending on chance. One can describe purchasing DLC as “insurance” that one will receive the advertised content, while loot boxes require the player to take a chance at earning a certain item or skin, without guarantee.

Instances of loot boxes appearing in culture dates back to the height of collectible baseball cards. Enthusiasts and collectors purchased baseball card packs in search of rare, limited-edition cards, this activity skyrocketed  in the early 90’s. Similar mediums today include Pokemon and Yu-Gi-Oh cards, franchises which gained success through childrens’ television. Loot boxes originated through Asian gaming and gambling markets, and eventually popularized in western markets in 2010. That year, Valve, a prominent game development company, transformed Team Fortress 2 into a free-to-play game with a new monetization system. That system would allow players to earn crates full of rewards as they play the game, which they can then unlock by purchasing “keys”. Valve would incorporate similar systems in future titles, including the wildly popular esport Counter Strike: Global Offensive (CS:GO).

Valve implemented loot boxes as a way to either speed up player progression in Team Fortress 2, or simply to gain equippable cosmetics in the form of weapons skins as in Counter Strike. However, not every game developer sought similar free-to-play friendly models. Electronic Arts (EA) adopted loot boxes into their own games too. This company published games across a wide range of different games, from Apex Legends to FIFA, and built notoriety in its monetization practices.

“Microtransactions and loot boxes appear across genres of video games, including sports games, role playing games, and action games, and come in many forms. For example, players may use them to acquire a new outfit or other character feature, an extra life to allow a player to continue gameplay, or a season pass giving the player access to upcoming game content at a discount,” the Federal Trade Commission said, in a workshop addressing loot boxes.

In late 2020, miHoYo released Genshin Impact, an open-world Japanese role-playing game (JRPG) that featured anime-like characters with special abilities and characteristics. The company utilized a budget of 100 million dollars to develop the game. Within two weeks, the game recouped all 100 million dollars. Anyone can download the game free of charge, but the core of the game revolves around gacha monetization, with players rolling characters and weapons.

The highest-rarity characters in Genshin Impact, rated by the game as five stars out of a possible five, possess a 0.6% chance of appearing from a roll. The “pity” system in the game guarantees that the player will gain a five star character every 90th roll on a when rolling from one category of items or characters, or a “banner”.

It does not take game-changing or useful items to convince people to purchase loot boxes. Titles including CS:GO and the Call of Duty franchise feature only cosmetic items in their loot boxes, allowing players to progress and play the game without so-called pay-to-win elements. Counter Strike: Global Offensive showcases both the overwhelming skill and talent of its top players, and the loaded wallets of its wealthiest collectors.

Similar to Team Fortress 2, players earn crates by playing the game and can open those crates with keys. The Steam Marketplace, where people most commonly trade, buy, and sell CS:GO skins, fosters a player-based economy where cosmetics and items can cost from as low as a cent to thousands of dollars. The AWP Dragon Lore skin sits among the top of the cosmetic food chain, sporting a price tag of $26,000 at its rarest variants.

Loot boxes lead people to gigantic spending sprees in the hopes that a rare drop will make their monetary investment worthwhile. An entirely new genre formed around the existence of loot boxes and attracts new players innocently scrolling through app stores, unaware as to just how much they can spend.

“In some way, loot boxes can become a gambling system because people use real money to convert it into in-game currency,” Seso said.

Five dollars becomes twenty. Twenty becomes one-hundred. One-hundred becomes a thousand. The only limit to video game spending lies at the bottom of players’ pockets, and the “0.6 percent drop” search continues endlessly. Shifts in the video game market drifted the video game industry away from traditional one-time payments to gain full access to a product. Instead, companies lean towards methods that earn the most profit. The introduction of gamlbing-esque systems draws a fine line between actual gambling and video games. Playing in moderation and identifying when one spends an unhealthy amount of time and money on a game will become a major issue as more game developers and companies turn to loot boxes to make a profit.

Numerous countries addressed this expanding monetization medium by enacting regulations and policies directed at loot boxes to prevent gambling addictions in consumers. On top of rising issues surrounding video game addiction, adding a layer of gambling can lead to gambling addiction as a result of popular titles on the market utilizing gacha or loot boxes. The government must take close watch on the industry as it continues to boom. 60 percent of America’s population play video games daily, meaning over half of Americans partake in games that might feature loot box systems. If that 60% speaks up and voices its concerns over increasingly dangerous and predatory monetization tactics in the video game industry, the government would take notice. The government needs to see the danger that affects the American people, but no one can make that more clear than the players themselves.