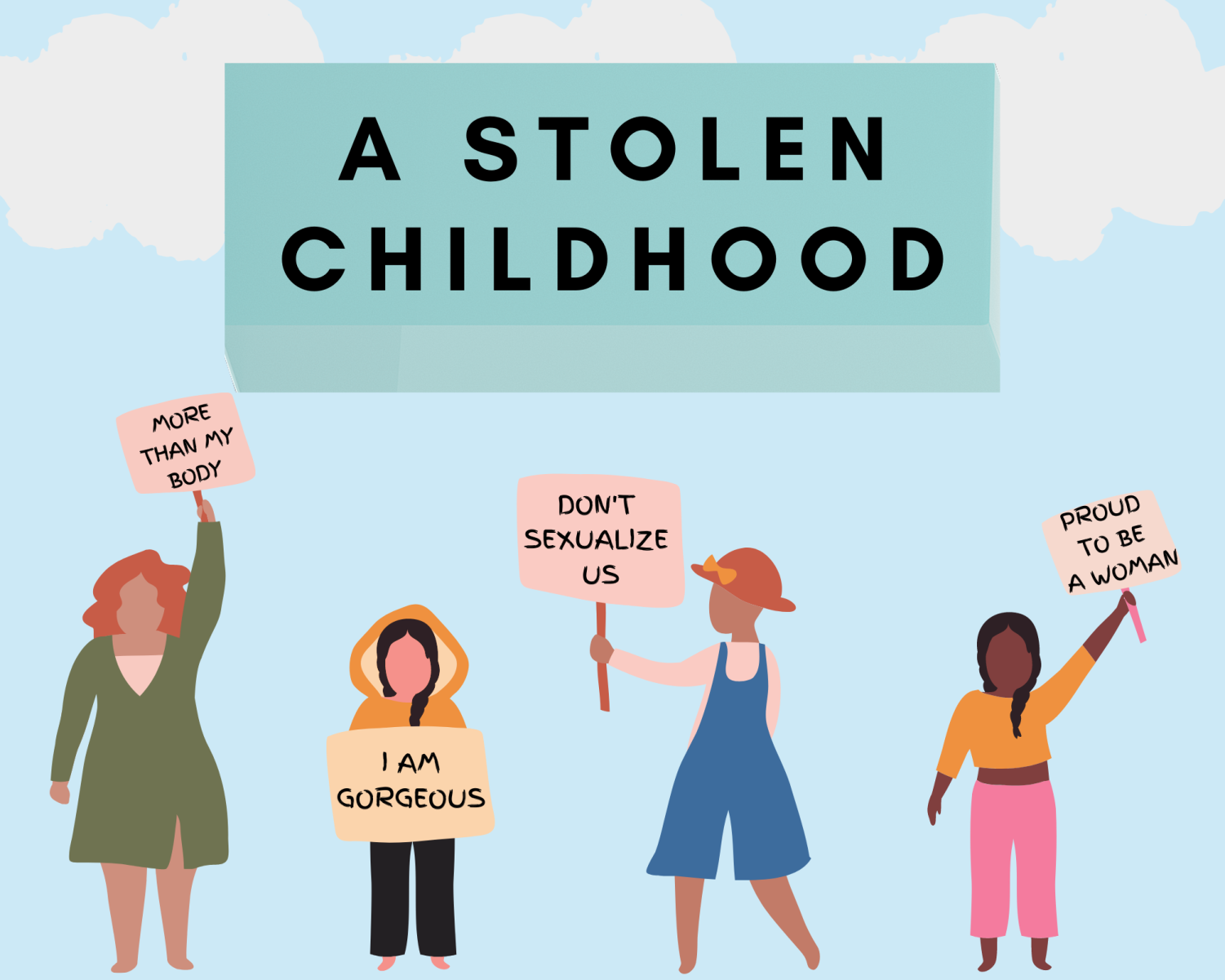 In contrast to men, women more frequently experience sexualization and impossible gender stereotypes as a direct result of the media. Despite the long-running fight for equality, female adolescents remain at a disadvantage due to this exposure from the media. Inaccurate portrayals of women hinder girls’ development, resulting in a lifetime of consequences. (Hannah Gresham)

In contrast to men, women more frequently experience sexualization and impossible gender stereotypes as a direct result of the media. Despite the long-running fight for equality, female adolescents remain at a disadvantage due to this exposure from the media. Inaccurate portrayals of women hinder girls’ development, resulting in a lifetime of consequences.

The effects of the media’s sexualization on underage girls: A stolen childhood

Modern society appears to espouse kids growing older younger (KGOY), at the expense of their innocence and youthfulness. The media, a means of mass communication, aids in this phenomenon, possibly resulting in a generation of more mature children, but seriously amplifies the sexualization of girls at a young age.

Larousse dictionary defines hypersexualization as “in society, the fact of giving an increasingly important place to sexuality, by multiplying references to it in the public space (media, advertising)”.

Controversy frequently surrounds this term because the word may sound synonymous with possessing a sexual lifestyle. However, in reality, it refers to making expressions, postures, and clothes (amongst other things) sexual in character.  Sexualization causes a person’s value to come directly from his/her sexual appeal and turns them into an object for another’s sexual use.

This increasingly prominent occurrence comes in numerous forms. It hides in magazines and popular shows, and remains disguised in Bratz dolls and trendy clothes. It encourages young girls to feed into the exploitation of females in the media and seek validation from older individuals and their surrounding peers. Due to exponential media growth, children face exposure to messages that may corrupt and change their mindset for the rest of their lives. Western ideals and beauty standards influence the media greatly, repeatedly valuing women’s appearance over morals or character.

“Sexualization in the media has affected a lot of girls, especially teens. It paints an image that’s only possible in magazines and I think it puts a lot of pressure on young girls to be someone they’re not or even to overthink what people think of them,” sophomore Jessie Wright said.

In the past couple of decades, this growing topic has brought about concern amongst researchers and developmental psychologists, who claim that adolescents, particularly females, remain vulnerable to messages presented in the media. Seemingly anti-feminist outlets highlight sex as the dominant theme; forcing young girls to adopt this mindset early on in life. Women’s magazines, apparently customized to inspire, promote confidence, and encourage girls to maintain healthy goals, and instead harm young viewers by focusing mainly on appearances and trends.

This prominent occurrence appears everywhere, and the American Psychological Association (APA) Task Force (2010) claims that the sexualization of adolescent girls and women directly affects the psychosocial development of young women, creating self-objectification, negative self-images, anxiety, shame, depression, eating disorders, and other psychosocial issues. As female adolescents face exposure to sexualization in the media as well, these negative effects only heighten. This frequently results in a lifetime of consequences that may never disappear.

Through both online platforms and interpersonal/social encounters, sexual objectification occurs. This then leads to self-objectification (and later to self-surveillance), which means “regular exposure to objectifying experiences that socialize girls and women to engage in self-objectification, whereby they come to internalize this view of themselves as an object or collection of body parts”.

Gender roles in the media also encourage this behavior, of looking at oneself as simply an object. The media frequently accents women who portray western ideals of beauty, and while trends vary through generations, a thin physique remains desired. Girls may find themselves pressured to look like media influencers, who, the majority of the time, contain thinner frames. The obsession with appearance results in more care going into one’s body than personality, thus, objectification comes into play.

Yet, countless young girls suffer further, developing mental health disorders that can last a lifetime. Body dysmorphia, a disorder in which one fixates on a perceived flaw or defect that appears minuscule to others, affects thousands of young girls. This can also lead to eating disorders, such as anorexia nervosa or bulimia nervosa. Social media makes it hard for young girls to realize body shape and size do not truly matter, as it feeds them overly edited bodies and exaggerated features.

“I could control and focus on this one thing, and spend my energy on it. I guess it [eating disorders] got worse with the rise of TikTok and Instagram and realizing how much people really care about how you look and your weight. Hearing my family make comments about me losing weight and seeing various TikTok trends featuring the ideal body urged me on,” magnet senior Miriam Hein said.

Sexualization in the media also hinders psychosocial and sexual development. Creating a sense of identity over role confusion, the conflict between multiple statuses or social groups, single-handedly stands as one of the most important developmental tasks adolescents must master. Within their families and social systems, children already struggle to identify their master status, and the media simply adds to the confusion and makes it difficult to embrace their uniqueness and feel a sense of security.

During these crucial years, children also experience an abundance of cognitive development and may transition from concrete operations to the formal operational stage, where they learn to consider other people’s perspectives. Social media provides an infinite number of opinions for young girls to consider, especially on how society expects women to look and act. This makes it more difficult for them to determine their goals and what others think of them.

In addition, the sexualization seen in the media may cause girls to form a negative sexual self-image of themself. Social media already portrays sexualized images of children, void of emotion or attachment, and as girls repeatedly see this type of content, they may represent themselves more and more in an overly sexualized way. In an interview of 11,000 girls (ages 14 to 22), 62 percent admitted to taking and sending nudes. After all, social media provides the “perfect” means to share these images and even send sexual messages.

“As a society, we need to replace all of these sexualized images with one’s showing girls in positive settings–ones that show the uniqueness and competence of girls. The goal should be to deliver messages to all adolescents—boys and girls—that lead to healthy sexual development,” Dr. Eileen Zurbriggen, member of an APA task force on the sexualization of girls, said.

Sexualization in the media on adolescent females additionally results in harm to a child’s academic career. When girls spend all of their mental resources focusing on what people think of them and on social media, they lack time to set goals and make education a priority. Self-objectification causes a slew of issues, and the focal point of a girl’s life turns to the “object” in question. All mental strain becomes consumed by body monitoring and self-evaluation.

While this involves college students and not adolescents, the vulnerability young girls possess will likely result in them showing similar trends. Rudimentary things such as body shape prove distracting when the media gives it power, and education becomes a background thought.

Sexual assault, another potentially harmful effect, can occur at school as girls increasingly find themselves looked at in a sexual manner. As peers objectify them, the possibility of receiving sexually degrading messages increases.

“Since the media has become so widespread, it’s easy for girls to compare themselves to influencers and spend time thinking about how to change their bodies or how to dress in order to get people to like you. I’ve definitely spent a lot of time questioning my self-worth and thinking about how to change due to how different I look than other girls at school, and I could’ve been focusing on more important things. I know a lot of girls at NC that have done the same,” magnet junior Peyton Kelley said.

The media depicts women in a sexual manner far more frequently than men, leaving young girls at a disadvantage. Their brains contain more synaptic connections than adults, which makes them highly impressionable to things around them. The more frequently they see these sexualized women in the media, the more it becomes normalized. The media impacts these harmful gender stereotypes and further escalates the issue so that violence against girls increases.

Numerous changemakers and organizations work hard to combat this pressing issue and make sure young girls feel valued. However, the issue does not just impact girls, but everyone who uses media, and in order to stop the harmful impacts it needs to be addressed at large. Despite its negative effects, the media can bring awareness to the topic and provide girls with a positive image of independent women when used correctly. While it has shown the negative ways it can influence people, it can also bring about positive change.