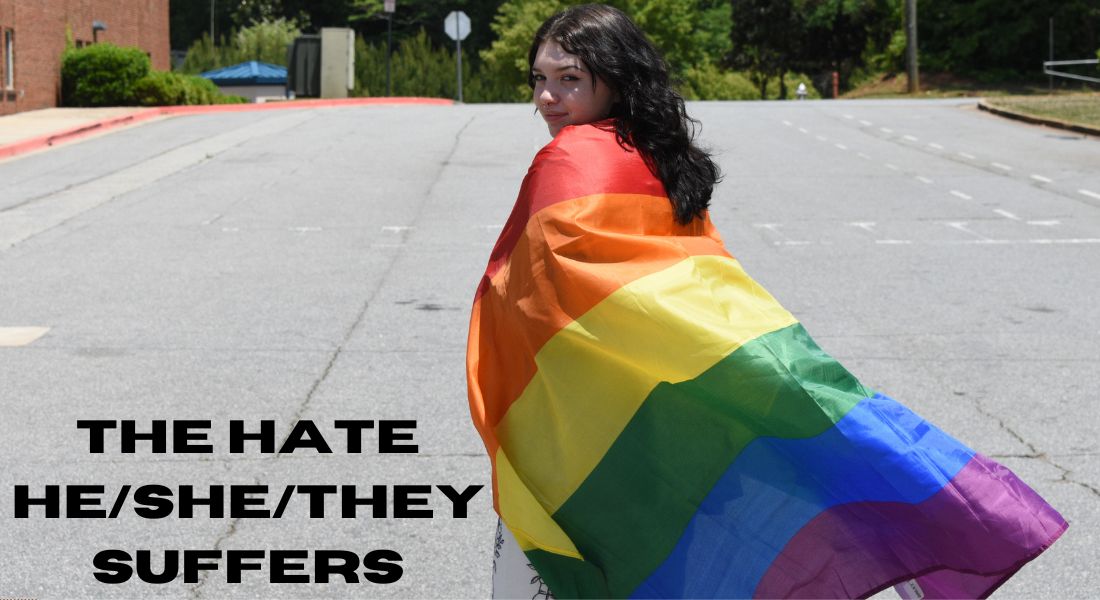 Jaden Bruton, a lesbian sophomore at NC, experiences hate at school and in public. On her first public date with a girl, strangers called them slurs. Being queer for her at NC has not been terrible, despite two main occurrences where people have become very negative about her sexuality. With this being only one example of prejudice, more untold stories where students become discriminated against will come up. Suffering for far too long, the queer community does anything within their power to stop the hate, taking to social media, peacefully protesting, and using everything they can to stop the unfair treatment. (Nicolas Gomez)

Jaden Bruton, a lesbian sophomore at NC, experiences hate at school and in public. On her first public date with a girl, strangers called them slurs. Being queer for her at NC has not been terrible, despite two main occurrences where people have become very negative about her sexuality. With this being only one example of prejudice, more untold stories where students become discriminated against will come up. Suffering for far too long, the queer community does anything within their power to stop the hate, taking to social media, peacefully protesting, and using everything they can to stop the unfair treatment.

Dora Richter, born in 1891, became one of the first transgender women to receive gender-affirming surgery. She worked as a housemaid at the Institut fur Sexualwissenchaft (Institute for Sexual Science), and served as a tester for theories developed by queer scientists who wished to create the gender-affirming surgeries and treatments the community undergoes today. She transitioned in 1939 with the assistance of surgeon Erwin Gohrbandt and lived her true life as a (trans) woman.

Society’s earliest records of the trans community document that whenever it started, the community became a subject of disdain on all sides. Court cases from all over the world exist from generations past, but also from now, in a world full of technology. Frequently with religious justification, people in power use that power to limit the lives of queer people to the best of their ability.

Within the aged writings of Ancient Mesopotamians lay a record of the earliest Androgynous society known to present-day man, the followers of Inanna. Their High Priestess, Enheduanna, preached the goddess’ elements of Sex, War and Justice during the 23rd century BC. Inanna existed as the most celebrated deity of the time, believed to hold the power of changing one’s gender. The culture documented their habit of breaking the binary gender rules, believing a man could become a woman, and a woman a man.

At the time, it became what society would recognize as the status quo. To withhold the ability of that switch, someone probably did it every other day. This type of gender fluidity wouldn’t exist as a sane idea if it became brought up in the past century. A rift formed at one point in time that didn’t allow for more recent cultures to think of, much less mention, such an atrocious idea as switching genders.

Born in the late 19th century in Dresden, Germany, Einer Wegener found herself in her mid-30s, living as a male up until then. She started off as a painter in Copenhagen, where she met her wife, Gerda Gottlieb. They were married, and Gerda constantly asked Einer to pose for paintings in women’s clothing, which became a major contributor to Lili, Einer’s chosen name. The couple moved to Paris, allowing Einer to appear in public not just as Einer, but as Lili too. Lili experienced gender dysphoria, a state of unease that trans teenagers and adults alike experience today.

“I was getting uncomfy with my pronouns and my body in about the summer of 2020. I was confused and didn’t know what it meant until I was exposed to it and started doing research about it and I’m not sure how it affected me. I still have my confusion about who I really am today,” freshman Jasper Payne said.

Lili died September 13, 1931, at the age of 48, after numerous experimental procedures to transition. One such procedure ended up taking her life. Her experience became just the start of failed procedures on trans people, causing deaths that were easily preventable with surgical developments in modern society. This example perfectly displays the suffering that trans people and the LGBTQ+ community as a whole go through. The current environment concerning trans surgeries continues to change, with a now common market approach to the procedures themselves.

The beginning of the modern queer rights movement started with Stonewall in June of 1969. Nine police officers raided the namesake of the revolt, Stonewall Inn, a gay bar located in Greenwich Village, New York. The premise sold alcoholic beverages without a liquor permit. The officers continued to arrest the employees and anyone without three gender-appropriate garments, such as boxers for men or bras for women.

This type of harassment became common to the community, but this specific occurrence sparked a rebellion in the queer members. The revolt attracted national attention, causing a national movement with pro-LGBTQ+ organizations appearing across the country.  This same movement continues today, with a majority of those organizations such as the Human Rights Campaign standing strong. This shows that despite the hatred trans people receive, they maintain their resilience, keeping up with the times to progress the movement.

A majority of the largest events in LGBTQ+ history happened in the past two decades. Before then, any progress of pro-trans or anti-trans movements became entirely public with the media covering it all. But now, pro-trans movements receive support, but there remains a rapid decline in attention the movement receives because of bigger news such as the war in Ukraine or the newest movie.

Another element in the United States news right now, specifically within the United States, concerns anti-LGBTQ+ bills passing into law. These bills, the same form of hostility displayed at Stonewall, become directed exclusively at the LGBTQ+ community. Not much can change quickly with government involvement, which implies the colossal contrast between the two eras. Initially, the abhorrence originated from the common citizen, someone who probably did not approve of the concept of the queer community in the first place. But nowadays, with technology present, this no longer stands as an excuse because they could recognize exactly what the queer community exists as. That means that the majority of the senators drafting and writing and putting into law all the anti-trans and LGBTQ+ bills people see today most likely know what they write against.

One such senator, Rick Scott, denies trans people exist entirely in his GOP manifesto, by writing “‘Men and women are biologically different, ‘male and female, He created them.’ Facts are facts, the earth is round, the sun is hot, there are two genders, and abortion stops a beating heart. To say otherwise is to deny science.”

“Men and women are biologically different. Facts are facts, the earth is round, the sun is hot, there are two genders, and abortion stops a beating heart. To say otherwise is to deny science,” Senator Scott said.

With nearly 240 anti-LGBTQ+ bills in the country passed in 2022 so far, the community becomes restricted in their everyday lives.  Florida’s HB 1557, the bill with the most media coverage, restricts talk of gender identity and sexual orientation in the classroom, in addition to similar bills all over the country. Another infamous bill, House Bill 1570, started in Arkansas, and it does not allow trans student-athletes to participate in sports on their chosen genders’ teams.

“Yes I have [received hate] and sometimes it really f*cking messes with me and makes me feel dysphoric. I don’t know why people are so mean about who I really am, like we’re all people. I just want to be accepted and be able to come out to other people without being scared that I’ll get physically hurt by them,” Payne said.

The LGBTQ+ community, especially the trans community, not only receives revulsion from people who should care, such as family but also from people who control different elements in their life at school or even in public. Despite all the contempt, the community perseveres. They fight in a multitude of ways, including organizing movements and creating funds to assist homeless gay and trans people. Such organizations such as The Trevor Project, exist for queer teens,  allowing them to share each other’s stories and letting them know that people will help them.

Today, a multitude of queer people suffer in isolation, dealing with their pain on their own. Any and every queer person, specifically trans or queer people of color, should know that someone will always help with the hate he/she/they suffers.