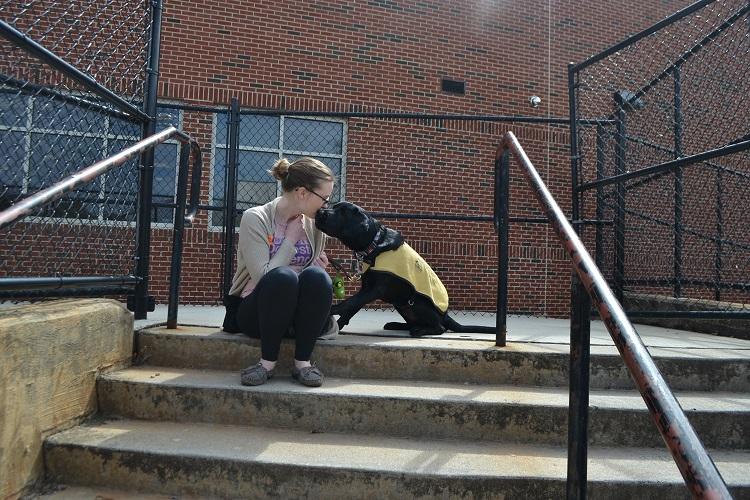 Last week, Maddie Swab, The Chant’s 2012-2013 editor-in-chief, took advantage of her spring break from the University of Georgia and visited The Chant staff. Only this time, she brought a furry plus-one named Navarro. 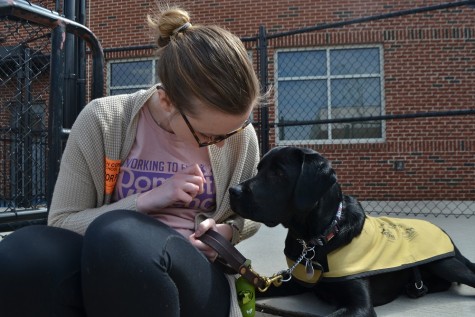 Carli Troutman
Maddie Swab and her best bud Navarro show their love for each other (and treats) while visiting Swab’s alma mater on UGA’s spring break.

This year, UGA sophomore Swab decided to add the responsibility of raising a guide dog puppy to her already time-consuming college majors of social work and women’s studies. Luckily, her studies and new friend go hand in hand.

By raising Navarro, Swab contributes to the service dog programs offered in Athens, such as the Guide Dog Foundation or America’s Vet Dogs.

He loves working; he was made for it.”

“We place dogs with people who are blind or visually impaired. For vet dogs, if a dog goes on that track instead, we place them with a veteran who has a mental or physical disability from their service,” Swab said. “What we do is we raise the dogs from around nine weeks old to 14 months old. Then, they go off for training in New York. From there, they get placed. We’re basically just exposing them, socializing them, and giving them basic training.”

However, forming a puppy into a responsible, mature service dog does not come easy for most trainers.

“It’s a lot of work. They tell you it’s going to be a lot of work and you’re just like, ‘Oh yeah, of course it’s gonna be a lot of work…whatever,’ but I equate it to raising a child… Like, I had to quit two clubs the first semester I had him because it was too much,” Swab continued. “It was a lot of stress when he was a puppy because you’re always like, “Oh my god, don’t poop in this building,’ which he’s done before.” 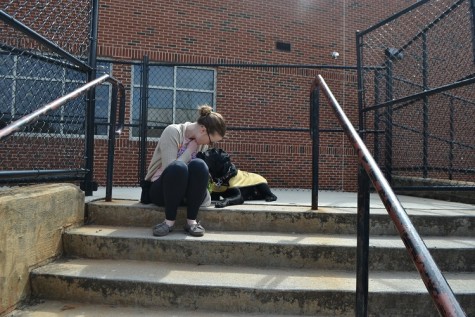 For some students, the stress can seem overwhelming, pushing them away from the program. However, Guide Dog Foundation offers alternatives for students still interested in helping out.

“Instead of being a raiser, there’s another option that some people do if they know they can’t handle it: it’s called camping and buddying. They’re basically babysitters for the dogs. They just get to watch the dogs instead of having their own, which helps out the raiser,” Swab says.

Adding this stress onto a college student’s heavy workload may seem dangerous, but Swab proves this theory wrong through her passion for the job.

“I wouldn’t trade it for anything … I think I’m going to be [in Athens] for at least another three years, if I get into the grad school at [UGA.] So I want to raise at least three more dogs. I knew I would like it, but I’m like completely in love with it and all of the people and the dogs,” Swab said. 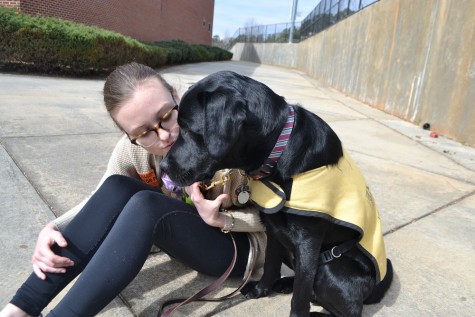 As soon as Swab became involved, her zeal for social work and dogs reached a completely new level.

“His original raiser couldn’t take care of him because she didn’t know it was going to be that much work. So, I found out the night before I got him that I was getting him and I hadn’t even completed the application process yet. It was a surprise; I got him in September and we’ve been BFFs since,” Swab says.

Along with forming an instantly strong bond with Nav, Swab has also formed him into the perfect service dog through daily training.

“It’s a process. He actually has had trouble with people and dog distractions. They’re actually doing this new thing in Athens,” Swab says. “It’s called marker training and it’s supposed to help with distractions. So that’s why I’m wearing this sweet fanny pack. I say his marker word every time he does something nice or doesn’t get distracted. So I say ‘Nice!’ and I give him a cookie.”

Nav immediately jumped up for his treat, despite being half asleep. 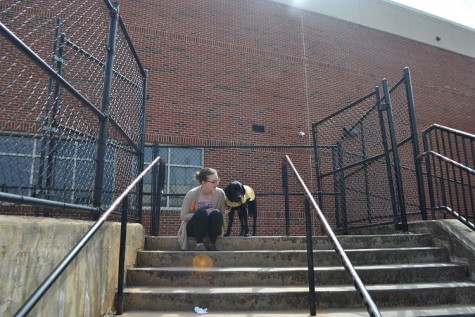 Through his training, Swab has become best buds with Nav, spending any time she can preparing him or playing with him. Because of strong friendships like these formed in the GDF program, some might have difficulty parting ways from their dogs. However, Swab feels prepared to let Nav move on to his greater purpose.

“He’s my little baby, and he’s the first dog that’s ever been mine. He goes everywhere with me. I had him camp with someone for a weekend to get more handling with him and I was all by myself. I was a complete wreck; it was super pathetic. I was talking to him when he wasn’t there and I stayed in my bed the whole weekend. So, it’s going to be hard, but I’m happy to see him go off,” Swab admitted.

With Swab’s training, she ensures Nav’s success in the guide dog business despite not having her by his side.

“I can tell he loves working. It’s what he was meant to do. I was about to leave him home the other day because I had a midterm and it was raining. He was so sad and pathetic; he was trying to come with me. He loves working; he’s made for it,” she said. 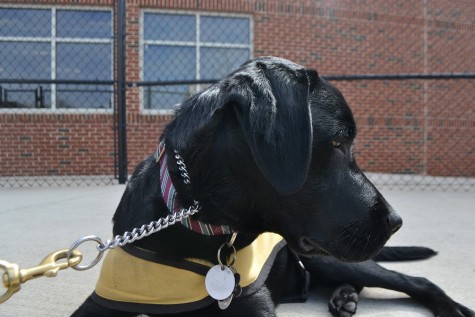 Swab’s and Navarro’s love for helping others will propel them into their futures in social work.