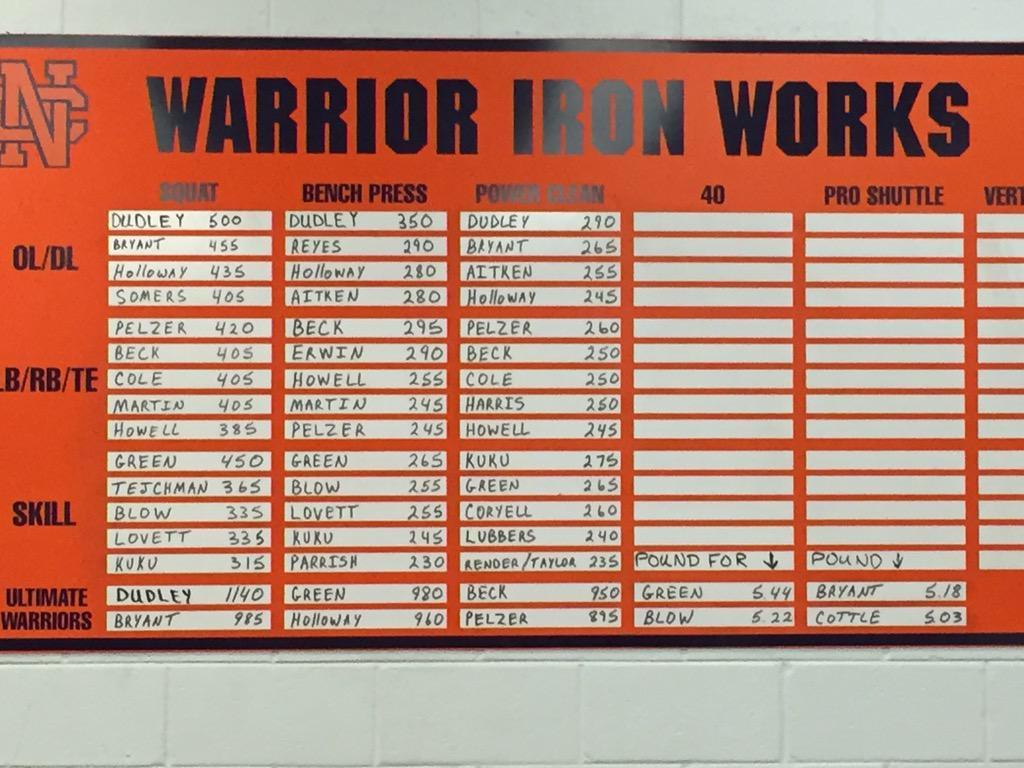 A board which shows the strongest players in each lift hangs in the weight room. (Andrew Lubbers)

A board which shows the strongest players in each lift hangs in the weight room.

Off-season, but not off track

Behind the glamour of the Friday night lights, players work hard to better themselves. As spring sports conclude, the sound of cadens, pads hitting, and coaches yelling will once again fill Emory Sewell Stadium. During the long period in which the football players and coaches’ fame and glory die down, they continue to grind in preparation for the season and start the journey for the team’s first state championship.

The off-season proves tough and perfects craft as many elements measure a player’s skill and readiness.

The initial part of the program begins with a meeting and a commitment from each football player. Athletes and coaches gathered in the weight room to discuss the upcoming year’s goals and standards.

The 2015 season revolves around five central character traits which the team should be defined by: pride, relentlessness, accountability, commitment, and toughness. An enlarged hand which lists the traits on each finger hangs on the weight room wall while players received a wristband with the acronym P.R.A.C.T. as a reminder of their commitment.

A council of 15 players, ranging from upcoming sophomores to seniors, assembled to establish a strong leadership core on and off the field. The group met weekly with Coach Queen throughout the off-season to deliberate team regulations and strategies.

“It bettered me as a person and made me push myself to new heights,” junior guard Zach Dudley said of being apart of the group. “Now having a whole team with the same mentality will be scary to see the things we can accomplish.”

The next, and viewed by Coach Queen as the most important facet of the offseason, resides in the weight room, where players struggle, sweat, and bleed to better themselves. Athletes must complete a series of three brutal workouts each week, which strengthen their bodies. Mondays and Thursdays work arms, Tuesdays and Fridays improve legs, and Wednesday mixes both while emphasizing explosiveness.

“I feel at this point that we’re a much stronger team and our work ethic is much better than last year, ” Coach Queen said, regarding the new workout.

Players agree as they feel this workout benefited them more than ever.

“I think the weight room is important because it gets us in shape and ready to run our up-tempo offense,” said sophomore receiver Allon Johnson.

Weekly mat drills help to create a competitive environment as players square up against each other in multiple challenges including  tug-o-war. The winner of the challenge enjoys a fresh pizza at the conclusion of workouts, which sparks motivation.

“They bring out the hard work in people and it transfers onto the field during spring,” said junior running back Zzream Holmes.

Finally, two weeks of spring practice complete the off-season as players strap on the pads and buckle up the chinstraps for the first time since November. Both athletes and coaches glow with excitement as position battles occur and new players emerge as key assets to the team.

“Spring is bittersweet because I know it’s the beginning of the end. But it’s always exciting to strap on the pads after a long offseason,” said junior linebacker Cale Reid.